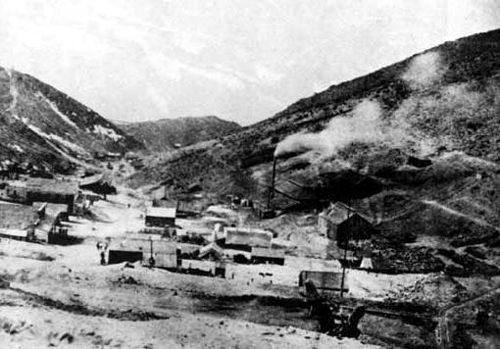 Cerro Gordo, California, on the western slope of the Inyo Mountains about seven miles east of Keeler and thirty miles south of Independence, was the first major silver strike in Owens Valley. Long before the area was developed, Mexicans had been crawling the mountain they called Cerro Gordo, meaning “Fat Hill,” looking for silver. However, an early group was attacked by Indians and three of the five prospectors were killed. Two were held captive and when they were released, they were required to promise never to return. However, after Fort Independence was established and the Indian activity subsided, the Mexicans came back about 1862.

The original discovery of rich veins of silver was made by a man named Pablo Flores who began mining and smelting operations near the summit of Buena Vista Peak in 1865.  In April 1866, the mine was included in the Lone Pine Mining District organized the same month. By 1867, tales of the silver at Cerro Gordo had spread, bringing in flocks of new prospectors.

Businessman, Victor Beaudry of nearby Independence, California, was so impressed by the quality of silver being taken out of Cerro Gordo, he opened a store near the mine and soon acquired several mining claims to settle unpaid debts. He then built two modern smelters and continued acquiring mining rights from debtors until he soon owned a majority of the richest and most productive mines in the area, which eventually included a partial interest in the Union Mine. 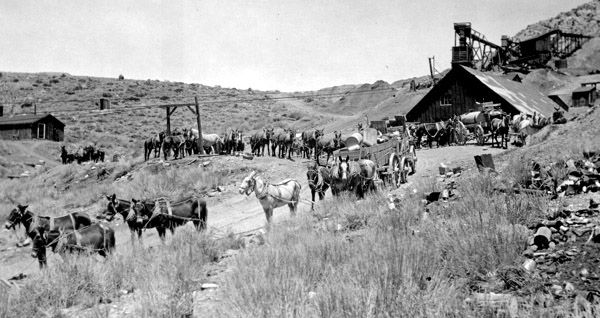 Cerro Gordo, circa 1909, from the L.D. Gordon Collection.

In 1868 another businessman named Mortimer Belshaw arrived in Cerro Gordo and after establishing a partnership with another stakeholder in the Union Mine, he brought the first wagon load of silver from Cerro Gordo to Los Angeles. Later, he would build a superior smelter as well as the first wagon road up the mountain. Known as the Yellow Road, Belshaw extracted tolls for its use and was able to control the shipments of silver from the mountain.

By 1869, Americans had taken over the property and ultimately turned it into the largest producer of silver and lead in California, yielding ores that assayed at least as high as $300 per ton. In the early 1870s, two smelters were erected at Cerro Gordo and one on Owens Lake near the rival town of Swansea.

According to Roger Vargo, of Explore Historic California,

“There are no natural water sources in or close to Cerro Gordo. A water company was established to tap and pipe water from springs about six miles away, but these springs were quickly depleted. All the water had to be hauled in on the backs of mules.

Wood was and is scarce at Cerro Gordo. Wood for construction came from Sierra Nevada forests. East of Cerro Gordo townsite is (and were) a large number of pinyon pines. These, much to the displeasure of the local Native Americans, were cut down and (mostly) converted into charcoal to be used in the furnaces. Charcoal was a more efficient fuel than wood. Firewood was also hauled in by mule and also came from the Sierras.”

Productive mines of the area were the historic Union Mine and the later Cerro Gordo, Cerro Gordo Extension, Estelle, Silver Reef, and Santa Rosa mines. 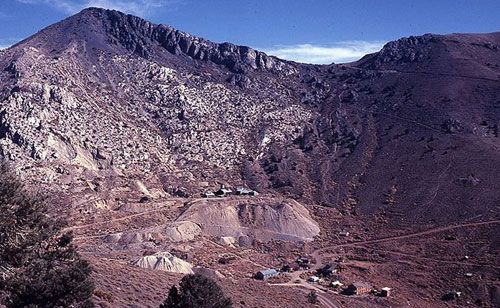 Mule teams transported the ore to Los Angeles, 275 miles away, necessitating high-class ore and bullion in order to make a profit, and for the first few years they did as trains of huge freight wagons delivered so much silver bullion from Cerro Gordo that the Los Angeles News, in February 1872 stated, “To this city, Cerro Gordo trade is invaluable. What Los Angeles now is, is mainly due to it. It is the silver cord that binds our present existence. Should it be unfortunately severed, we would inevitably collapse.”

In 1875, Cerro Gordo suffered a series of setbacks, necessitating the shutdown of its furnaces. These problems resulted from a scarcity of ore in the mine, which had lasted for several months, and the temporary drying up of its water supply. Making matters worse in the slowdown of production was litigation that was initiated in 1870 over ownership of the Union lode. This matter was finally settled in January 1876 when the Union Consolidated Mining Company of Cerro Gordo was created and preparations made to return to full-scale production. However, the revival was not destined to last, as by late 1876 and early 1877 the Union Mine appeared to be played out. A fire that raged through some of the mine buildings and the Union shaft was the final straw and the furnaces were closed the following February. A more lethal blow was dealt by falling lead and silver prices, effectively ending this era of activity at Cerro Gordo.

But, it was not the end for Cerro Gordo. In 1905, mining activity was revived in the Panamint region, and hope was seen for many of the old productive mines. Cerro Gordo was purchased by the Great Western Ore Purchasing and Reduction Company, which envisioned building a 100-ton smelter for custom work and also to process ore left on the Cerro Gordo dumps, earlier considered too low grade for the technological methods then in use. By modern methods, the ore could be worked profitably. By 1907 high-grade zinc was found in the old Cerro Gordo stopes, and ore shipments were begun. 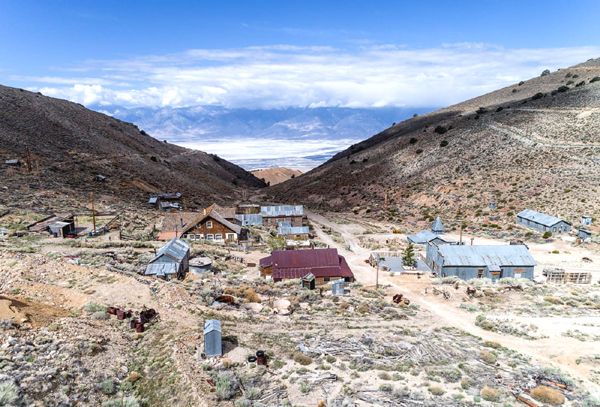 In 1912 the Cerro Gordo group, whose property now consisted of tunnels and shafts and an aerial tramway connecting the mine with the narrow-gauge Southern Pacific Railroad at Keeler, which had absorbed the old Carson & Colorado Railroad, was acquired by Utah mining men. Shipping 1,000 tons of ore daily, Cerro Gordo became the largest producer of zinc carbonates in the United States.

By 1920, about ten men were still employed by the Cerro Gordo mines company and silver-lead ore was being shipped. A few years later, in 1924, silver-lead ore on the old dumps was worked by concentration and flotation after five concentrators were installed in the Keeler mill. Gross production of the Cerro Gordo camp from its early profitable years up until 1938 was about $17 million.

Privately owned today, the site includes a number of buildings, the remains of the Union Mine, equipment, and kilns. Two of its buildings can be rented by overnight guests including the Belshaw House, which was originally built in the 1870s, and the Bunkhouse, built in 1904. The American Hotel, built in 1871, along with several other buildings, burned to the ground during the early morning hours of June 15, 2020. There was no damage to the rest of the town.

At an elevation of 8,300 feet, there are three roads that access the site, some of which are not recommended for vehicles with low ground clearance.

Update July 2018: The town has sold to new owners who say they want to preserve its history for all to enjoy. Read this article from the New York Times. 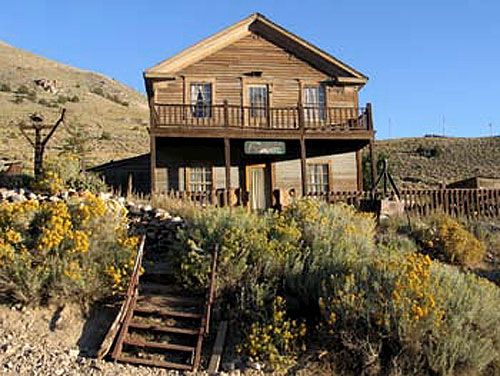 The 1871 American Hotel in Cerro Gordo. Photo courtesy Cerro Gordo Mines. The hotel burned to the ground in June of 2020.

More Information: Check the link below before you go!