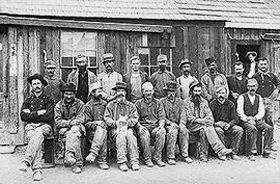 I’m a muleskinner, proud to be one and good at my job. I don’t skin mules–I drive ‘em,   that’s what muleskinner means. Right here haulin’ borax outta Death Valley. Ain’t no other place I want to be, no other job I  want to be doin’.

Pete Aguereberry (1874-1845) – Born in France, Aguereberry made his way to Death Valley and, along with Shorty Harris, established the town of Harrisburg, California and the Eureka Mine.

Patrick “Patsy” Clark (1852-1915) – An Irish immigrant, Clark made millions in mining and developed and invested in mines all over the American West.

William Tell Coleman (1824-1893) – Shipping magnate, merchandiser, leader of the 1851 and 1856 Vigilante Committees of San Francisco, attorney, politician and the owner of the Harmony Borax Works in Death Valley, he was the first to operate the famous Twenty-mule teams to carry the product from 1883 to 1889.

Ernest L. “Ed” Cross – One of the discoverers of the famous Bullfrog Mining District, Cross was a quiet sober newlywed who partnered up with Frank “Shorty” Harris in the summer of 1904.

James R. Davis – Nevada mining man and one of the perpetrators of the Gold Bar Swindle in the Bullfrog Mining District.

James Dayton (18??-1898) – The long-time caretaker of the Furnace Creek Ranch in Death Valley, Dayton worked as a prospector with Shorty Harris in previous years and also as a swamper for the 20 Mule Team wagons hauling borax.

Frank “Shorty” Harris (1856-1934) – One of the best-known and colorful prospectors of Death Valley, Frank Harris discovered the ore of the Bullfrog District in Nevada and at Harrisburg, California, which was named for him.

Albert Mussey Johnson (1872-1948) – An eccentric millionaire who served as President for many years of the National Life Insurance Company, built Scotty’s Castle in Death Valley, California, and was variously partner, friend, and dupe of infamous Wild West con man Death Valley Scotty, for whose outrageous antics he later served as the financier.

Arthur Kunze – The founder of the original Greenwater townsite, first called Kunze, was a prospector who was more interested in copper than gold.

J.P. Loftus (1856-??) – Nevada mining man and one of the perpetrators of the Gold Bar Swindle in the Bullfrog Mining District.

Andrew Jackson “Jack” Longstreet (1834-1928) – From Tennessee, Longstreet made his way to Death Valley and was known as the “Last of the Desert Frontiersmen.”

Ernest Alexander “Bob” Montgomery (1863-1955) – Capitalist and mine operator, Montgomery was a self-made man who after, years of prospecting, made discoveries at Johnnie and Bullfrog, Nevada that made him wealthy. Also involved in Goldfield, Nevada and Skidoo, California, he continued his mining investments and development his entire life. See full article HERE.

Charles M. Schwab (1862-1939) – Making his fortune in the steel industry, Schwab became wealthy and began to invest heavily in Death Valley mining ventures. After living a lavish lifestyle for years and the stock market crash of 1929, he died in poverty. 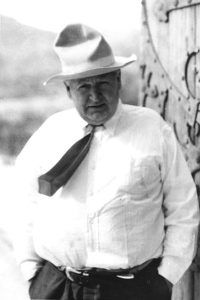 Walter Edward Perry Scott, aka “Death Valley Scotty” (1872 – 1954) – A prospector, performer, and con man, Scott was made famous by his many scams involving gold mining and the iconic mansion in Death Valley, popularly known as Scotty’s Castle.

Francis “Borax” Marion Smith (1846-1931) – Known throughout the world as “Borax” Smith and “The Borax King,” the mining magnate owned the Pacific Coast Borax Company and aggressively promoted the 20-Mule-Team Borax brand and trademark.

Christian “Chris” Brevoort Zabriskie (1864-1936) –  Hailing from Wyoming, Zabriskie was a businessman and former vice president of Pacific Coast Borax Company. Zabriskie Point in the Funeral Mountains east of Death Valley is named after him.

“Jane, I left you and them boys to procure a little property by the sweat of my brow so that we could have a place of our own-that I might not be a dog for other people any longer.” 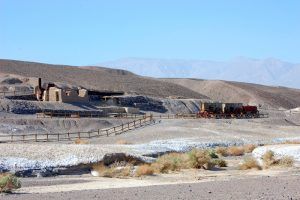