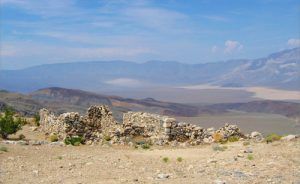 Lookout City, California is a former settlement in Death Valley that was located in the Mojave Desert in southern Inyo County.

In the Argus Range at the top of Lookout Mountain, on the west side of the Panamint Valley, the Lookout District was formed in May 1875. The principal mine was the Modoc which was bought in 1876 by George C. Hearst and other capitalists who formed the Modoc Consolidated Mines Company of San Francisco.

The mining camp that grew up around the mine consisted of two general stores, three saloons, company offices, and as many as 30 other wood and stone structures. Other mines were soon developed in the area below including the Minnietta Belle. At first, the Modoc, Lookout, and Minietta ores were reduced in the Surprise Valley Mill at Panamint City, but in the fall of 1876 Hearst had two 30-ton furnaces built at the Modoc Mine.

Remi Nadeau, a freighter for Cerro Gordo and Panamint City, built a road up the Panamint Valley from the foot of the Slate Range to the Modoc and Minietta mines and was soon hauling charcoal by wagons and mule back to the Modoc furnaces from the ten charcoal kilns in Wildrose Canyon.

The Minietta Mine operated on and off until 1915. In 1924 this silver-lead-gold mine was reopened and the Modoc Mine was leased. Their slag piles and dumps were reworked, yielding gold, silver, copper, lead, and zinc. In the mid-1930s the Minietta was leased and refinanced and a mill and modern equipment were to be installed. If gold and silver prices held, the future of the mine seemed bright. By 1938 the Modoc Mine had produced $1,900,000 worth of ore and the Minietta $1,000,000.

Today there are several stone walls and foundations of the former townsite, as well as numerous mining ruins. Lookout is located on a mountain top about 15 miles southeast of Panamint Springs, California. It can only be accessed with a 4-wheel drive vehicle.