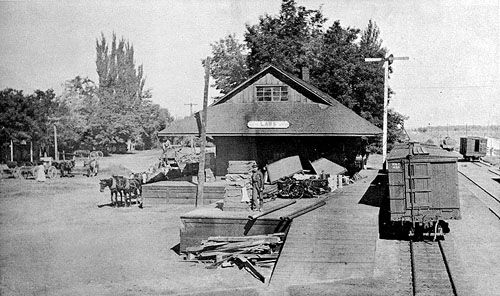 Formerly called Bishop Creek Station, the town of Laws, California got its start in 1883 as a depot on the Carson & Colorado Railroad which originated in Nevada, before climbing over Montgomery Pass and making its way to the upper reaches of Owens Valley and on to Keeler to service the rich silver mines of Cerro Gordo. The first train arrived in April 1883, at which time, the depot, water tank, turntable, and homes for the local agent and section boss had already been built.

A small community soon grew up around the 20’x74′ depot building and in February 1887, a post office was opened. Before long, Bishop Creek Station became a transportation hub for agricultural products and ores being shipped in the region. It soon sported a barber, a boarding house, two general stores, a blacksmith, restaurant, hotel, dance hall, a school, and several warehouses. Several industrial buildings and offices would come later. In 1900, the Southern Pacific Railroad bought out the Carson & Colorado line and renamed the station Laws in honor of R.J. Laws, a railroad official.

In 1908, the Southern Pacific expanded its narrow-gauge line north from Mojave to Owenyo, making direct rail connections to both the north and south from Owens Valley. Laws remained busy carrying people and products in and out of the valley, until the Great Depression hit, at which point, Laws, like so many other towns, began to decline. In 1938, the Southern Pacific closed the narrow gauge line to the north and tore out the rails. However, as the northernmost terminus of Owens Valley, Laws remained busy for another 20 years.

In April 1960, the Southern Pacific closed the remaining portion of the narrow gauge between Laws and Keeler. It was the last public-use, operational narrow-gauge railroad in the American West. Later its tracks were pulled up and the station and some of its old cars and equipment were donated to the City of Bishop. Though laws took a major hit with the removal of the railroad, it still hung on, primarily due to a mill operated to process clay and talc from nearby mines through the 1960s. Finally, the post office closed its doors forever in June 1963. Unfortunately, many of the original buildings had been torn down for salvage even before the railroad ceased operations.

But, Laws would not completely die, as the City of Bishop and Inyo County moved to establish a railroad museum in the once flourishing community. At about the same time a movie company was utilizing Laws as the site of a production called Nevada Smith. Starring Steve McQueen and made by Embassy Pictures and Solar Productions, in association with and released by Paramount Pictures, the producers helped to restore some of the old buildings and built others for the set of the film. The Laws Railroad Museum opened in April 1966, the same year the film was released.

Today, the Laws Railroad Museum and Historic Site include not only those buildings restored and built for the old movie set, but also several buildings from the area that were doomed for destruction but, were saved by being moved to the museum grounds. Operated by the Bishop Museum and Historical Society, the site includes a re-created an old-time village around the original 1883 depot and Agent’s House. Buildings, including an old general store, ranch house, school, church, and more, contain exhibits of historic artifacts from the area. The last steam train to operate on the old Narrow Gauge line is on display at the museum outside the depot. 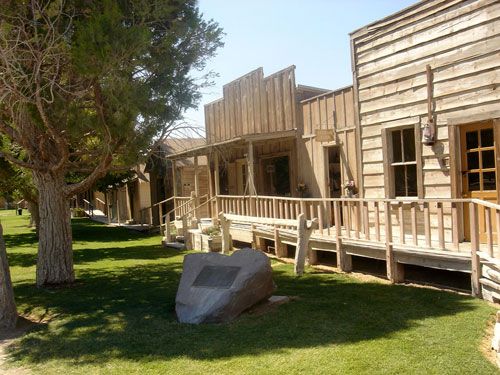 The site is a California Historical Landmark and listed on the National Register of Historic Places. It is located four miles northeast of Bishop on U.S. Route 6.