In the Winter of 2015, we traveled to Death Valley and ran into the town of Death Valley Junction. It has quite the story to tell. 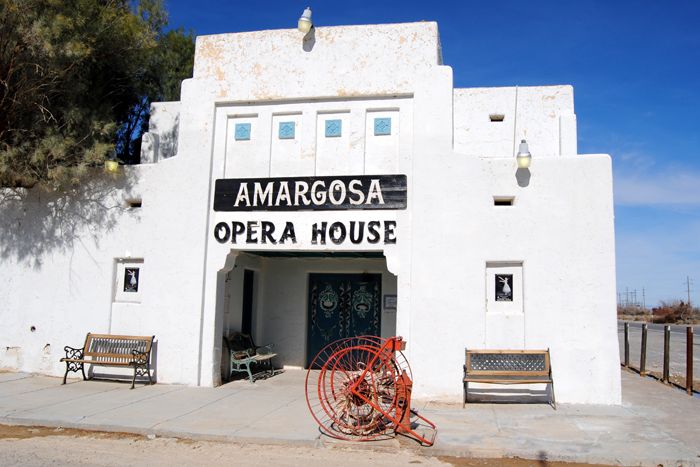 The Amargosa Opera House in 2015. Photo by Kathy Weiser-Alexander.

“Outside, in the world, people struck each other, yelled, honked horns. Inside, in the theater, they conversed by singing and dancing. I knew that was where I belonged.”  — Marta Becket

First called Amargosa, meaning “bitter water” in the Paiute language, this tiny town situated in the Mojave Desert, is today home to less than a half dozen people. Getting its start as a borax mining community, several historic buildings continue to stand today including the Amargosa Hotel and Opera House, which still cater to visitors.

Long used by area Indians, in the 19th century, this site began to be utilized by prospectors and area settlers. In 1907, when a post office was established, the name was changed to Death Valley Junction. However, there was very little here until 1914 when the Pacific Coast Borax Company built the Death Valley Railroad, a narrow-gauge line that operated from Ryan, California to Death Valley Junction, carrying borax. The railroad, which ran for about 20 miles from Ryan, connected up with the Tonopah & Tidewater Railroad, providing the opportunity for the Pacific Coast Borax Company to profit from the Tonopah, Goldfield, and Bullfrog booms to the north, as well as servicing their own borax mines on the eastern fringes of Death Valley.

That first year, the town gained several new businesses housed in tents, including a tent hotel, tent saloon, tent store, and a few dwellings. However, the next year, the town began to grow when new mines were found in the area and a number of permanent buildings were erected. As it began to take on an air of permanence, a number of milling facilities for borax were built in the area and the town’s location made it a social center for the outlying area. 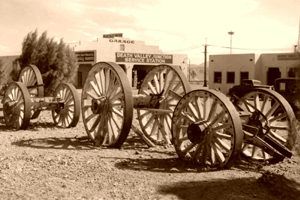 From 1923 to 1925, the Pacific Coast Borax Company constructed a number of buildings in Amargosa, hiring architect Alexander Hamilton McCulloch to design a Spanish Colonial Revival whistle-stop, which centered on a hotel, theater, and office complex building.  The U-shaped complex of adobe also housed a dormitory, a store, a 23 room hotel, and dining room. A recreation hall was built at the northeast end of the complex and was used as a community center for dances, church services, movies, funerals, and town meetings. At that time, this building was known as Corkhill Hall. The town’s population peaked at about 300 people, but its heydays were short-lived.

In 1927, the Pacific Coast Borax Company moved its headquarters to a new mine closer to Los Angeles, California, and the following year, the Death Valley Railroad discontinued operations between Ryan and Death Valley Junction. Once running parallel to today’s State Route 190, the railroad’s equipment was pulled up and transferred to the United States Potash Railroad in Carlsbad, New Mexico. However, a locomotive from the railroad can still be seen at the Borax Museum at Furnace Creek in Death Valley National Park.

Though its main employer was gone, the town continued to survive as a tourist destination until the Depression, when it dropped off dramatically. However, the creation of the Death Valley National Monument in 1933 kept interest in Death Valley high and though declining, Death Valley Junction continued.

Death Valley Junction had rail service until 1940 when most everyone left and the post office was closed. Area residents then received their mail from Furnace Creek Ranch, some 30 miles away.  A couple of decades later, another post office was opened in 1962, this time reverting back to the name of Amargosa.

In 1967, things once again changed for the small town when New York ballet dancer, mime, artist, and actress, Marta Becket and her husband suffered a flat tire in Death Valley. 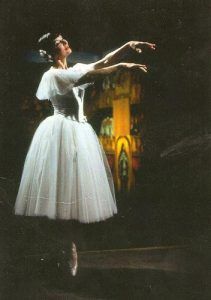 From an early age, Marta showed amazing creative talents, including dancing, playing the piano, and artistic qualities. As a young woman, she danced at Radio City Music Hall, and on Broadway in New York City, appearing in Showboat, A Tree Grows in Brooklyn, and A Wonderful Town. In 1962, she was married and soon began to tour the country.

In 1967, after months of touring, she and her husband decided to take a vacation camping in Death Valley. However, one morning, they awoke to find a flat tire on their trailer. Directed to Death Valley Junction by a park ranger to have the tire repaired, Marta began to explore the old adobe buildings while it was being fixed. Fascinated with the old buildings, she discovered the old theater and was enthralled. Peering through a small hole in the door at the back of the building, she immediately knew this place was meant for her. Later she would say, “Peering through the tiny hole, I had the distinct feeling that I was looking at the other half of myself. The building seemed to be saying…..Take me…..do something with me…I offer you life.” And, that’s exactly what she did.

Having always wanted to design her own costumes, choreograph her own dances, and create her own show, she and her husband located the town manager. The very next day, they agreed to rent the abandoned theater for $45.00 a month and assume responsibility for repairs. Originally called Corkhill Hall, she renamed the theater the Amargosa Opera House and almost a year later, on February 10th, 1968; she gave her first performance to an audience of just 12 adults.

That same year, the town’s name was once again changed to Death Valley Junction. Somewhere along the line the post office closed its doors forever, but Marta Becket and the Opera House continue to welcome visitors today. 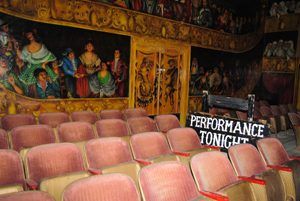 In the early years of the theater, there were few visitors, sometimes, none at all so she soon began to paint an audience on the wall. From 1968 to 1972, characters from the past including kings and queens, Native Americans, bullfighters, gypsies, and more took shape. After four years of painstaking work, she then began painting the ceiling with cherubs, billowing clouds, and ladies playing antique musical instruments. It was completed in 1974.

Through the years, the audience grew and the theater gained attention. Donations were made for the continued renovation of the theater including a concert grand piano and chairs for the theater. Parts of the main building became a hotel and café as renovations continued to be made on the old buildings of the town.

With help and legal advice from friends, and through the Trust for Public Land based in San Francisco, the Amargosa Opera House, Inc. bought the town of Death Valley Junction. On December 10th, 1981, it was listed in the National Register of Historic Places.

In 1983, the Opera House bought 120 theater seats from the Boulder City Theater in Boulder City, Nevada to replace the charming but old garden chairs needing retirement. That same year, Marta’s husband left for other interests, but, before long, in walked Thomas J. Willett, a comedian who stepped in as stage manager and M.C. He also co-starred with Marta playing other parts in the production. Unfortunately, Willett died in 2005.

Somewhere along the line, the café closed but was reopened in 2009.  The Opera House and Hotel also remain open as well as a small museum.

In addition to the buildings of the hotel and Opera House, several old buildings and the old train yards can still be seen. There are no gas stations. Death Valley Junction is located at the intersection of SR 190 and SR 127, just east of Death Valley National Park. 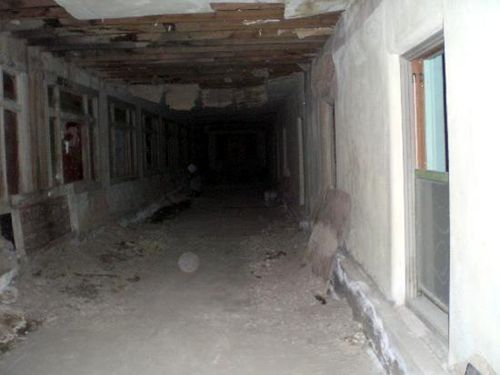 The unfinished portion of the Amargosa Hotel is affectionately known as “Spooky Hollow.”

Though Death Valley Junction has not been known as a place of tragedies, it is allegedly haunted according to a number of reports.

One interesting “ghost,” who has long been seen, is a mysterious cat who has been known to interrupt Marta’s performances at the Amargosa Opera House. Also allegedly haunting the theater is the spirit of Tom Willet, Marta’s former partner, who has often been spied sitting in one of the chairs observing performances.

An un-renovated section of the hotel has long been affectionately referred to by the staff as “spooky hollow” due to a number of strange happenings that have taken place there. This part of the building was once used as a dormitory for the miners during the borax days, as well as including a hospital and morgue.

In Room 24 of the Amargosa Hotel, guests have repeatedly reported hearing the sounds of a crying child during the night, when no children are staying at the hotel. This may be the ghost of a young girl who drowned in a bathtub in 1967.

Room 32 is said to harbor a threatening, malevolent presence that gives visitors the chills. Evidently, this room was once called home to a mining boss and it is known that hanging took place in the room during the borax heydays.

Room 9 is said to be the most haunted. Here, a number of people have reported that while they are sleeping, something holds their legs and feet down. Yet more have heard the doorknob turning, only to open it and find no one there. Sounds of a child giggling and running down the hall outside the room have also been heard.

In the dining room, guests have reported hearing voices of what sounds like a group of people, especially the distinctive high voice of a woman.

Other activities include strange noises coming from the walls, shadows that are often seen dancing across the stage, the sounds of footsteps crossing rooms in the night and coming down hallways, the scent of lilacs, and showers that seemingly turn on by themselves.

According to reports, guests are often known to pack their bags and abruptly leave in the middle of the night.