Two of Death Valley’s most noted mining personalities — Pete Aguereberry and Shorty Harris, founded Harrisburg, California after finding free gold on a ledge while making their way to Ballarat.

Aguereberry, who had almost died making his way to Death Valley, had been saved by Oscar Denton and was recuperating at Furnace Creek Ranch in June 1905. There, he met Shorty Harris and the two men decided to pull out for the Panamint Mountains together and do some prospecting, although Shorty was actually more interested in getting to the 4th of July celebration at Ballarat. After negotiating the old “dry trail” through Blackwater Wash, they arrived on the open plateau now known as Harrisburg Flats, about nine miles northeast of Wildrose Spring.

Shorty, being on horseback and driving his mules harder, was some distance ahead of Aguereberry, who at this point saw a promising-looking ledge on the north side of a low long hill.

Chipping off a piece, he found it contained free gold and hurriedly catching up with Harris, Pete showed him the ore sample, and the two excitedly made plans to continue on to Wildrose Spring to replenish their water and then return and stake out claims. During this time of further prospecting and exploratory work, the two divided up the outcroppings, Aguereberry staking claims on the north side of the hill, which later became known as “Providence Ridge” or “Providence Hill,” including the Eureka Nos. 1-4, while Shorty took claims on the south side, which later incorporated the Providence Group. These finds were located at the extreme northeast end of an east-west ridge that rises about 200 feet from the mesa. The initial name agreed on for the camp was Harrisberry, in the hopes that a strong association with Shorty Harris would attract prospective investors.

The pair then split up, both eventually heading for Ballarat, where Shorty spread the word of his new find and Pete picked up a grubstake. Within a few days of Aguereberry returning to his hill, the rush was on, with gold-seekers from Ballarat swarming all over the strike area, necessitating that Aguereberry reestablish his original ground by both persuasion and force. Harris’ version of the story is slightly different, suggesting that he found the first evidence of riches and was forced to share the discovery with Pete. According to one newspaper, ” Pete and Shorty have not flipped coins to determine who is actually responsible for the strike, but the credit is generally given to Shorty, perhaps from previous achievements.”  The real facts may never be known, but however it happened, another Death Valley boom camp had been born.

By August 1905 at least 20 parties were locating claims in the surrounding hills within a three-mile radius of the original discovery. About 50 locations made almost immediately. The new area was included in the Wild Rose Mining District. Samples from the immense quartz ledge, which, it would turn out, stretched north to the future Skidoo and Emigrant Springs mining areas, were assaying from $90 to $200 per ton in free-milling gold, with some rumored to have values as high as $500.

Before long, it was reported that 300 people were living in the new camp, which was already organizing a townsite company, and somewhat depopulating Ballarat and Darwin, California as well as attracting many from Rhyolite, Nevada. By September, 200 claims had been recorded in the area and the camp’s population was expected to triple with the coming of cooler weather.

The intense involvement of “outsiders” in the Harrisberry discoveries and their desire to get in on the ground floor, manifested itself in the immediate bonding of Shorty Harris’ strikes to several millionaires from Tonopah, Nevada and of Aguereberry’s claims to Goldfield, Nevada capitalists. A few days earlier Harris had gone to San Francisco where he succeeded in persuading some investors to visit his property in anticipation of financing development work. The result of this visit was the formation of the Cashier Mining Company, headed by O.L. Ingalls. 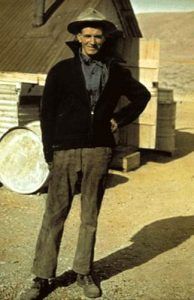 Shorty Harris continued to extol the virtues of “his” town in the Panamints whenever he journeyed to Rhyolite or other nearby camps. Along the way, as he told and retold his story, he changed the name from Harrisberry to Harrisburg and the name stuck.

The survey of the Harrisburg townsite and of the Cashier Gold Mining Company’s claims was undertaken by J.H. Wilson of Cripple Creek, Colorado, who had been an engineer in Goldfield, Nevada. He established residence in the area and proceeded to open an engineering office (touted to be the first such business opened in the Panamint Range). A William O’Brien, of Bullfrog, Nevada was put in charge of the six men at work sinking three shafts on the property, and a tunnel at the foot of the hill to hit the vein as low as possible.

By late October, the land had been surveyed for a townsite and tents were constantly springing up in the business section. The Cashier Gold Mining Company now kept 23 men busy, at $3.50 a day, round-the-clock, Twenty-seven tons of high-grade ore had already been mined to be shipped to Keeler.

The vast number of prospectors swarming the hills created a shortage of fresh food, which sold for exorbitant prices. Rumors still persisted of a deal pending in Goldfield either for the Eureka and/or the Cashier Group for $160,000. In February it was reported that owners of the Eureka Group had sold a half interest in the property to San Francisco investors who paid $15,000 down and intended to build a mill.

In December 1905 a big strike was made on the six claims of the Exjunction Group about two miles northeast of Harris’ Providence claims. Quartz averaging $259 in gold, silver, copper, and lead was being exposed. Stretching for five miles along this same ledge were 40 other claims. By this time about 40 men were working in and near the camp.

By spring and summer of the next year, discoveries hastening the advent of Skidoo were being made about two miles from Emigrant Springs, attracting miners from throughout the region. The Panamints were rapidly filling up, despite continuing transportation problems. 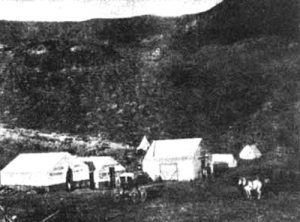 By April 1906 the Wild Rose Mining Company had been incorporated, which included the Exjunction gold, silver, copper, and lead claim. The following month, Shorty Harris boasted that there were 20 tents in residence and that he was planning to try to sink for water shortly, thus negating the need to haul this precious commodity from Emigrant Springs.

Not putting all his marbles in one bag, however, he also proceeded to locate two groups of claims near the Emigrant Springs Gold Eagle strike. The Cashier Mining Company was still having success with the Providence claim, which seemed to harbor steady reserves. The Ingalls interest in the company was purchased in the fall of 1906 by T. E. Crawford of Helena, Montana, making him co-partner with Shorty Harris. These two planned to immediately employ 15 men on sinking a new shaft. Crawford was also planning to install a five-stamp mill on the property that could draw water from the Skidoo pipeline to Telescope Peak.