Sitting on the western outskirts of Death Valley in Inyo County, California, tiny Darwin, a semi-ghost town today, was once the largest city in the county. The settlement started in early 1860 when a prospecting expedition led by Dr. E. Darwin French set out from Visalia, California, searching for the Lost Gunsight Mine and a place that had long been referred to as “Silver Mountain.”

Exploring the rocky, dry landscape southeast of Owens Lake, French’s party never found the Lost Gunsight Mine or Silver Mountain. Still, they did discover rich silver outcrops, staked several claims, and headed back to Visalia to record them. When they returned, they were followed by hundreds of others, and soon mines developed, and the rugged mining town of Coso Junction was born.

Around 1870 more gold, silver, and lead deposits were again discovered in the Coso Range, resulting in the formation of the New Coso Mining District in 1874. The settlement of Darwin was soon established and named for early explorer and prospector Dr. Darwin French. Quickly developing into the main commercial center in the area, by the end of 1875, Darwin boasted two smelters, some 20 operating mines, a post office, graded streets, a drug store, hotel, three restaurants, the ever-present saloons, a newspaper, 200 frame houses, and more than 700 residents. The Defiance Mine was the principal producer in the district, but other profitable mines included the Argus-Sterling, Christmas Gift, Lucky Jim, Custer, Independence, Keystone, Thompson, and the Wonder Mine. 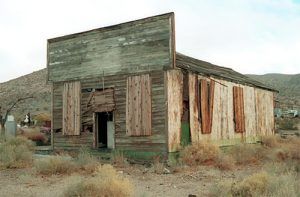 The following year, the town continued to grow, supporting over 1,000 people, at which time, it was the largest town in Inyo County. Its Centennial Celebration on July 4, 1876, was the second largest in the county. Though the settlement had taken on an air of permanence, it also gained another reputation — that of a rowdy and violent town. Because of its isolation and distance from the county seat of Independence, gunplay, assaults, and stage robberies were common. Still, the town continued to grow, peaking at a population of about 3,500 in 1877. However, it would not continue. The following year a smallpox epidemic swept the community, and a national economic slowdown hit Darwin hard. Production slowed, and mine owners scaled back wages, creating more violence in the community.

In September 1878, the newspaper office closed its doors, and the publisher, T. S. Harris, packed up the presses and headed north toward the boomtown of Bodie. He was followed by many of the miners. However, the following month, it was reported in the Independence newspaper that the town still had 200-300 people, four stores, three restaurants, five saloons, and a drug store. Six months later, on April 30, 1879, a suspected arson fire began in the Darwin Hotel, which resulted in the loss of 14 businesses, including several stores, offices, the hotel, saloons, and the post office.

Though much diminished from its former self, Darwin didn’t completely die. In 1880, some 85 people still called it home. In 1902, however, the post office closed briefly but would later reopen. 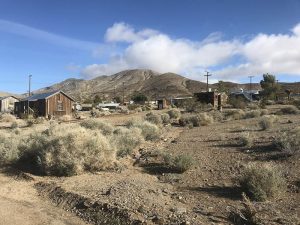 During the early 1900s, a rebirth of the mining industry occurred in southern Inyo County when copper, which had earlier been left on the dumps because it was considered worthless, began to be mined in earnest as its value had risen dramatically. In 1907 Senator Tasker L. Oddie of Nevada bought nine claims in the Darwin area, while George Nixon and George Wingfield of Goldfield, Nevada fame, took over some property. At the same time, the Lucky Jim Mine was shipping lead-silver ore to Salt Lake City smelters in Utah. Another smelter opened in nearby Keeler, and during the next ten years, more mines opened, and older ones were re-worked. A new hotel was built, and the town began to show signs of coming back to life. Unfortunately, in August 1917, another fire blazed through the town, which destroyed a service garage, the new hotel, a saloon, and three homes. Less than a year later, another fire swept down the other side of Main Street, destroying more homes and businesses.

However, by June 1919, the Darwin District, especially the Lucky Jim and Christmas Gift Mines, was still going strong, driven by the increase in the price of silver. Another significant development occurred on Mt. Ophir when a company town was built to house all the miners needed to work the Wagner & Company Mine.

In 1926 the Eichbaum Toll Road was built through Darwin and into Death Valley, bringing tourist cabins and service businesses. By 1927 the Darwin District’s future seemed assured, for the area was found to contain ores of nearly all the metallic minerals — silver, lead, gold, tungsten, and copper. However, the mines were shut down during World War II for the war effort. Production for the area from 1870 to October 1938 reached approximately $3 to $5 million, and some estimates were as high as $7 million by 1945.

After the War, in 1945, the Wagner Mine and other operations were purchased by the Anaconda Copper Mining Company. They soon became the number one lead mine in California, producing two-thirds of all that commodity used. It remained in operation until the 1970s. The total value of all lead, silver, and zinc produced was evaluated at $15 million. 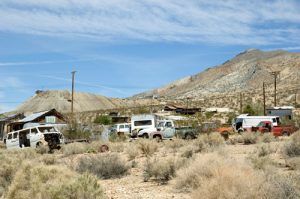 Today, Darwin’s population is estimated at just about 35 people. On the hillside of Mt. Ophir, about ½ northwest of “downtown,” can still be seen the remains of the company camp, including decaying rows of company houses as well as Quonset huts and mill buildings. Its downtown area still contains several buildings, once housing businesses but now closed. In the area, scattered and rusted mining machinery and the remains of the old Defiance smelter are complete with rusted-out hulks of vehicles and trailers.

Darwin is located about 24 miles southeast of Keeler, California.