Note: Our collection of historic text involving Tombstone covers the lead up to the gunfight of the O.K. Corral, as well as the aftermath, including testimony, sworn statements, letters, book excerpts, etc. Also includes text regarding the Bisbee Massacre and lynching of John Heath in Tombstone. These are not always exact quotes, as spelling errors and minor grammatical changes have been corrected.

“Last Tuesday night a shooting affair took place at Safford in which Louis Hancock was shot by John Ringo. It appears Ringo wanted Hancock to take a drink of whiskey, and he refused saying he would prefer beer. Ringo struck him over the head with his pistol and then fired, the ball taking effect in the lower end of the left ear, and passing through the fleshy part of the neck, half inch more in the neck, would have killed him. Ringo is under arrest. ….  Moral — when you drink with a man that is on a shoot, and he says ‘whiskey,’ don’t you say ‘beer.'” 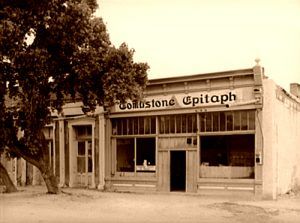 “About 7 o’clock last evening the pistol was used with fatal effect on Allen Street, resulting in the death of T.J. Waters from gunshot wounds from a weapon in the hand of E.L. Bradshaw.

The causes which led to this unfortunate tragedy are brief. Waters was what is considered a sporting man, and has been in Tombstone several months. He was about forty years of age, powerful build, stood over six feet in height and weighed about 190 pounds. When sober he was a clever sort of man but quite the opposite when under the influence of liquor. Yesterday he won considerable money and had been drinking a great deal, hence was in a mood to be easily irritated. Bradshaw was an intimate friend of Waters but a very different character, being a man of medium size, over fifty years of age and very reserved and peaceable in his disposition. We understand that these two men had prospected together and when Waters first came to Tombstone he lived in Bradshaw’s cabin.

Yesterday morning Waters purchased a blue and black plaid shirt, little dreaming that the fated garment would hurl his soul into eternity before the sun had set. It so happened that several good natured remarks were made about the new shirt during the day until Waters had taken sufficient liquor to make the joking obnoxious to him, and he began to show an ugly resentment and was very abusive, concluding with, “Now, if anyone don’t like what I’ve said let him get up, G-d d-n him. I’m chief. I’m boss. I’ll knock the first s— of a b— down that days anything about my shirt again.” This happened in the back room at Corrigan’s saloon and as Waters stepped into the front room Bradshaw happened in, and seeing what his friend was wearing made some pleasant remark about it, whereupon Waters, without a word, struck Bradshaw a powerful blow over the left eye which sent him senseless to the floor. Waters then walked over to Vogan & Flynn’s, to see, as he said, “if any s— of a b— there didn’t like this shirt.” He had just entered the street when Ed Ferris made some remark about the new shirt, which Waters promptly resented in his pugilistic style.

After some more rowing Waters went back to Corrigan’s Saloon. As soon as Bradshaw recovered from the knockdown he went into the back room, washed off the blood, went down to his cabin, put a bandage on his eye and his pistol in his pocket. He then came up to Allen Street and took his seat in front of Vogan & Flynn’s saloon. Seeing Waters in Corrigan’s door, Bradshaw crossed towards the Eagle Brewery, and walking down the sidewalk until within a few feet of Waters, said: “Why did you do that?” Waters said something whereupon Bradshaw drew his pistol and fired four shots, all taking effect, one under the left arm probably pierced the heart, two entered above the center of the back between the shoulders and one in the top of the head ranged downward toward the neck, any one of which would probably have resulted fatally. Waters fell at the second shot and soon expired. Bradshaw was promptly arrested and examination will be had in the morning before Justice Gray.”

“The appointment of Wyatt Earp as Deputy Sheriff, by Sheriff Shibell, is an eminently proper one, and we, in common with the citizens generally, congratulate the latter on his election. Wyatt has filled various positions in which bravery and determination were requisites, and in every instance proved himself the right man in the right place. He is a present filling the position of shotgun messenger for Wells, Fargo & Co., which he will resign to accept the later appointment.”

“From New Mexico: From Mr. I. Clanton, who arrived in Tombstone yesterday from New Mexico, we learn that emigrants from Colorado, Texas, and Kansas are rapidly coming into the territory. The mines in the Victorio District are looking exceedingly well. A short time since a new camp, known as San Simon, was opened and from present indications, will soon eclipse any other in the territory. The leads are large, averaging 125 ounces to the ton. The camp is located about eighty miles east of Tombstone. While at Fort Bowie, Mr. Clanton was informed, on what he considered reliable authority, that a portion of Victorio’s band had returned to Nex Mexico and were at present in the Black Range. He brought through with him fifty head of cattle for the Tombstone market, being five days on the road from San Simon.”

“A dispute arose in the Oriental Saloon between John Tyler and Doc Holliday. Mutual friends disarmed both, and Tyler went away, Holliday remaining [and later] being bodily fired out by Joyce. Holliday returned and turned loose with a self-cocker. Joyce jumped his assailant and struck him over the head with a six-shooter, felling him to the floor and lighting on top of him. Officers White and Bennett were near at hand and separated them, taking the pistols from each. Joyce was found to be shot through the hand, his partner, Mr. Parker, who was behind the bar, shot through the big toe of the left foot, and Holliday with a blow of the pistol in Joyce’s hands.”

Wyatt expects to become a candidate for sheriff of Cochise county this fall, and as he stands very near to the Governor and all the good citizens of Tombstone and other camps in Cochise county he will without doubt be elected. The office is said to be worth $25,000 per annum and will not be bad to take.”