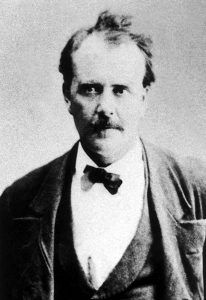 Wells W. Spicer was a journalist, prospector, politician, lawyer, and judge who was immersed in two significant events, including the Mountain Meadows massacre in the Utah Territory in 1857 and the 1881 Gunfight at the O.K. Corral in Tombstone, Arizona.

Born near Chemung, New York, Spicer was related to the Earp brothers. After becoming an attorney, he moved westward, where he worked as a lawyer and mining engineer at Salt Lake City, Utah. In 1875, he unsuccessfully defended John D. Lee when he was charged with the Mountain Meadows Massacre. Three years later, he moved to Tombstone, Arizona, where he worked as an attorney, mining broker, and U.S. Commissioner for Deeds. By the time the Gunfight at the O.K. Corral took place, Spicer served as Tombstone’s Justice of the Peace. After Sheriff Johnny Behan arrested the Earp brothers – Virgil, Wyatt, and Morgan and Doc Holliday, a pre-trial hearing was held on November 29, 1881, where Spicer decided that the defendants had been justified in their actions. His concluding statement read in part:

“In view of all the facts and circumstances of the case; considering the threats made the character and position of the parties, and the tragic results accomplished, in manner and form as they were, with all the surrounding influences bearing upon the result of the affair, I cannot resist the conclusion that the defendants were fully justified in committing these homicides that it was a necessary act done in the discharge of official duty.”

Spicer immediately began a potential target for the Cowboy faction, who began to take revenge. In December 1881, he received the following threatening letter:

“Sir, if you take my advice, you will take your departure for a more genial clime, as I don’t think this One Healthy for you much longer As you are liable to get a hole through your coat at any moment. If such sons of bitches as you are allowed to dispense Justice in this Territory, the Sooner you Depart from us, the better for yourself And the community at large you may make light of this But it is only a matter of time you will get it sooner or later So with those few gentle hints I Will Conclude for the first and last time.”

Though Spicer wasn’t killed by the Cowboy faction, his decision regarding the Earps brought his career to an end, and he soon left Tombstone and worked as a mining engineer. Some sources indicate that he wandered into the desert in 1887 near Ajo or Quijotoa, Arizona, and was thought to have committed suicide. Other sources say he staged his demise and made his way to Mexico to evade creditors.