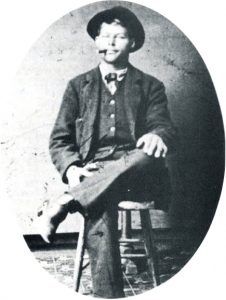 Frank C. Stillwell was an was an outlaw Cowboy, gunman, and businessman who was suspected of killing Morgan Earp.

Frank was the son of William “Henry” Stilwell and Charlotte B. “Sarah” Winfrey. Frank was born in Iowa in 1856. Shortly afterward, the family moved to Kansas Territory to a location on the Santa Fe Trail. When he grew up, he and his brother Simpson were in Anadarko, Oklahoma before traveling to Prescott, Arizona Territory in 1877. Though his brother Simpson would take a more honorable path, becoming an Indian fighter, scout, Deputy U.S. Marshal, police judge, and U.S. Commissioner, Frank was not destined to do so.

While in Prescott, Frank worked at Miller’s Ranch and killed another man after an argument. He was later acquitted on the grounds of self-defense. When Frank’s brother Simpson left Arizona for Fort Davis, Texas Frank remained in Arizona and then went to work as a teamster. Later, he staked a claim and worked a mine in Mojave County and in 1879 got into another argument with a man over claim-jumping. After brutally beating and killing the man with a rock, he was charged with murder but escaped a grand jury indictment for lack of evidence.

Next, he made his way to Tombstone, where he hooked up with the Clanton Gang and began a new career of cattle rustling. Thief or no, Johnny Behan appointed Stillwell as a Cochise County Deputy Sheriff in 1881. While acting in that capacity, he and a man named Pete Spence robbed the Tombstone-Bisbee stage of $3,000 on September 8, 1881. Though arrested, they were acquitted. Not satisfied with this result, Wyatt Earp soon rounded them up and brought them in for a second trial, but they were again acquitted and released.

In Tombstone, Stillwell prospered, perhaps with the help of the Clanton Gang. He soon owned interests in several mines and various businesses, including a saloon, a wholesale liquor business, a stage line, and livery stables

After the Gunfight at the O.K. Corral, the Earps suspected Stillwell, along with Ike Clanton, as having been the killers of Morgan Earp on March 18, 1882. Two days after Morgan was murdered, Wyatt and Warren Earp, along with Doc Holliday, ambushed Stilwell at the Tucson Train Station. His bullet-ridden body was found the next morning.

Arrest warrants were issued for Earp and four others and murder indictments were issued at Pima County for Wyatt Earp, Doc Holliday, Warren Earp, Sherman McMasters, and John Johnson. Earp agreed to turn himself in but instead fled the Arizona Territory for Colorado.