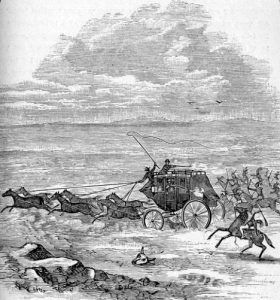 Attack on the Overland Trail

As a result of the many skirmishes between the whites and the natives in Wyoming, the U.S. Government sent large reinforcements into the territory during the spring and summer of 1867. The plan was to send an expedition against the combined Sioux tribes under Chief Red Cloud but, for whatever reasons, nothing of this kind was attempted. Instead, the troops were stationed at various forts and summer camps while Indian attacks were made on the stage lines and along the North Platte River.

While the soldiers were garrisoned in these various Wyoming forts, they chose to save the trouble of escorting emigrants, instead, stopping the travelers at different points and holding them until a sufficient number arrived to be organized into companies that could defend themselves against any attacks.

During this time, the Indians did not disturb the troops who were in garrisons to any extent.

Without any military protection, the Indians began to attack the stage line west of Fort Sanders in May 1867. As a result, the stage company refused to carry passengers, stating that their stations had been attacked and burned, their men either killed or wounded and their stock was stolen. Altogether, there appeared to be reasons enough why the passenger coaches were not run.

Though there were no great gatherings of Indians along the travel routes, small bands of warriors, who came to the stage line, ran off the stock and if it did not incur too much risk, white men were killed and scalped. The depredations were systematic, relentless and were intended to wear out the patience of the stage company, freighters, and emigrants. Those who kept a sharp lookout and traveled in large bodies had little to fear. However, those who lagged in the rear or ventured too far in advance were vulnerable to attack.

Surveying parties on the Union Pacific Railroad, in spite of the precautions taken, often suffered severely. A party under a man named Hills was straightening the line in June 1867, 13 miles east of present-day Cheyenne when he and his crew were attacked on Crow Creek by 75 Sioux warriors. Hills was killed at the first onslaught and one of his assistants, named Archer, was badly wounded. The town of Hillsdale was named in honor of this murdered surveyor.

It would be impossible to give a detailed account of the numerous attacks on surveying parties, graders, passenger coaches and emigrant outfits that occurred that year. The Indians were satisfied with the running off of the stock and the killing of any white man who exposed himself beyond the limit of protection. This was the condition of things on the main lines of travel east and west and along the route of the railroad under construction.

The Bozeman Trail and the entire country through which it passed was filled with danger seen and unseen. Chief Red Cloud kept his headquarters near Fort Phil Kearny and it was there he intended to fight it out with the soldiers.