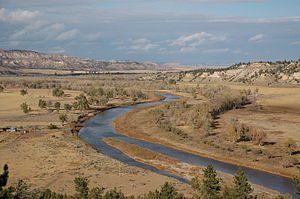 The opening battle of the Black Hills War, between the U.S. Army and the Sioux and Cheyenne, the Battle of Powder River, Montana occurred in March 1876 when Brigadier General George Crook advanced north from Fort Fetterman, Wyoming. The fight is also known as the Reynolds Battle

Discovering an Indian trail, General Crook sent Colonel Joseph J. Reynolds and six troops of the 2d and 3d Cavalry to find a village he suspected to be at the end of the trail.

At dawn on March 17th, scouts located a village in the Powder River Valley and Reynolds quickly made plans for an attack. He split his men up into several groups. One was to ascend the steep bluffs to prevent the Indians from escaping, two to directly attack the village from different directions, and an another, to capture the Indian’s large horse herd of about 1,000 animals.

However, the village was further distant than he anticipated and only one group charged the village, while the other battalions were delayed. The surprised Indians fled their lodges to the bluffs above the valley and began to fire on the troops below. 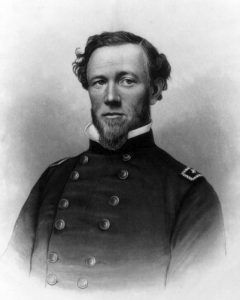 When Reynolds arrived the soldiers were still under fire and he ordered everything in the village destroyed, including food, blankets, buffalo robes, and ammunition, despite the fact that that the dried buffalo meat and buffalo robes would have been invaluable to the freezing and hungry soldiers on half rations. The troops were under fire for five hours in freezing temperatures and howling winds until the destruction of the village was complete at about 2:30 pm, at which time Reynolds ordered his soldiers to withdraw. In his haste, he left behind the bodies of three dead soldiers, as well as a badly wounded private who was subsequently “cut limb to limb” by vengeful Indians.

The battle resulted in four soldiers killed and six wounded, but at least 66 men suffered from frostbite. The Cheyenne lost only one man killed and another wounded.

The exhausted soldiers then marched 20 miles to Lodge Pole Creek before they finally encamped. The next morning, the Indians recaptured all but 100 of their horses during another snowstorm. Reynolds did not meet up with General Crook until about noon, at which time, Crook, discouraged by the setback, the shortage of supplies, and the bitter cold and deep snow led the troops back to Fort Fetterman. Along the way, the column was harassed by the Indians stealing back their ponies, and Crook ordered the remaining horses killed. The troops finally reached Fort Fetterman on March 26th.

Although the attack destroyed a large amount of Indian property, it was poorly carried out and probably solidified the Indians’ resistance to the U.S. attempt to force them to sell the Black Hills and live on a reservation.

Afterward, General George Crook brought charges against Colonel Joseph Reynolds, accusing him of dereliction of duty for failing to properly support the first charge with his entire command; for the burning of captured supplies instead of keeping them for army use; and for losing hundreds of the captured horses. In January 1877,  he was court-martialed at Cheyenne, Wyoming and found guilty of all three charges. He never served again. 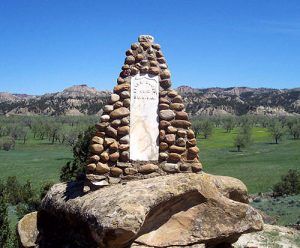 A marker is located near the northern edge of Moorhead, Montana. The actual battle site is accessible via an unimproved road, about four miles northeast of Moorhead.