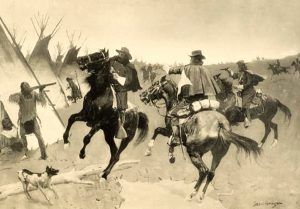 The Battle of Little Muddy Creek, also known as the Lame Deer Fight, was one of the final struggles in the Army’s conquest of the Sioux. On May 7, 1877, the battle was fought in Rosebud County, Montana, on May 7, 1877, between U.S. soldiers against a village of Miniconjou Lakota and Northern Cheyenne.

By May 1877, most of the hostile Indian groups who had participated in the Little Bighorn’s Battle the previous summer had been brought under U.S. Army control. However, one hostile camp remained — that of Chief Lame Deer. On May 1st, General Nelson Miles led 471 men out of Cantonment Tongue River, searching for Lame Deer’s camp.

On the Tongue River, scouts found an Indian trail heading west to Rosebud Creek, and Colonel Miles and his men followed the trail. They soon spotted a camp of 61 lodges on Little Muddy Creek. Before dawn at 4:30 a.m. on May 7th, a mounted force charge into the sleeping village. Chief Lame Deer and his nephew Iron Star ran but were soon cornered. Many others were able to escape. One of the army’s Indian scouts, Hump, called to the Lakota and Cheyenne that Miles wanted to negotiate with them. The Indians agreed, and when Miles told them to put down their rifles, they nervously complied, although they left them cocked and pointed forward. As the opposing groups talked, someone made a false move, and the Indians grabbed their guns. Lame Deer fired at Miles, who dodged, and the bullet killed another trooper. A ferocious gun battle followed, and Lame Deer was killed.

When it was over, four soldiers had been killed and nine wounded. An estimated 14 Minneconjou were dead and 20 wounded. General Miles then took 40 prisoners and captured about 450 horses.

The Little Muddy Creek Battlefield is located on an unimproved road about 1-1/3 miles southwest of Lame Deer, Montana.