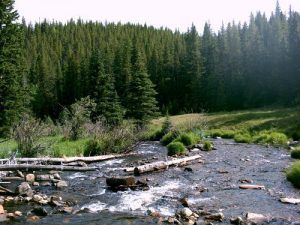 The Battle of Crazy Woman Creek in Wyoming on July 20, 1866, was another clash with Indians who were resisting travel on the Bozeman Trail during Red Cloud’s War.

The battle began when Sioux and Cheyenne warriors attacked a small wagon train at the trail crossing of the Crazy Woman Fork of Powder River. Escorted by Lieutenant George M. Templeton and a detachment of 29 soldiers, the train was heading north to Fort Phil Kearny. The party passed by Fort Reno before following Dry Creek to its junction with Crazy Woman Creek.

Scouting ahead, Lieutenants Templeton and Napoleon H. Daniels were attacked by more than 50 warriors. Daniels was killed and Templeton took an arrow in his back and was wounded in the face. However, he was able to make it back to the wagon train, which he ordered corralled. 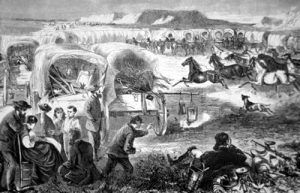 The situation was desperate, as of the 37 people in the party, nine were women and children and only ten of the 19 enlisted soldiers had guns. A battle raged from early afternoon through sundown, at which time the soldiers were getting low on ammunition. Two men including a soldier and the Chaplain Reverend David White volunteered to ride back to Fort Reno for help. However, before they were on their way, another larger wagon train came along the scene. Comprised of 34 wagons and 47 men, under Captain Thomas B. Burrowes, they approached from the northwest on its way to Fort Reno.

Burrowes quickly took command of both parties and the Indians left the area. One of Burrowes’ men, Private Terrence Callery, who had been hunting ahead of the wagon train was killed. The next morning the soldiers found the body of Lieutenant Daniels stripped, scalped, and pierced with 22 arrows. Both wagon trains then returned to Fort Reno.

Today, a stone monument and several interpretive signs stand near the battlefield, which is located near Buffalo, Wyoming.