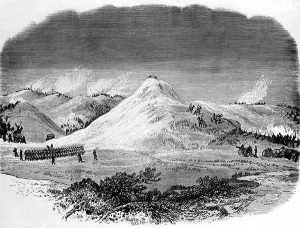 The Battle of Wolf Mountain occurred January 8, 1877, in southern Montana between the United States Army against Lakota Sioux and Northern Cheyenne warriors during the Great Sioux War of 1876.

This battle climaxed Colonel Nelson A. Miles‘ winter drive of 1876-77 to pursue the Sioux under Crazy Horse, who had annihilated the George Custer command the preceding summer on the Little Bighorn. In October, Miles captured and sent 2,000 of them back to the reservation. Despite blizzards and extreme cold, he remained in the field. On January 7, 1877, he camped beside the Tongue River on the southern flank of the Wolf Mountains. The next morning Crazy Horse and 800 braves made a surprise attack. Miles, his howitzers disguised as wagons, quickly repulsed it. The Indians took refuge on bluffs overlooking the camp. When the troops assaulted the bluffs, the warriors withdrew under cover of a snowstorm. Many of them surrendered with Crazy Horse and Dull Knife’s Cheyenne in the spring at Fort Robinson, Nebraska.

The battlefield is on the east side of the Tongue River, beneath Pyramid Butte, a spur of the Wolf Mountains. A gravel road bridges the river from the west crosses the valley where Miles camped; ascends the bluffs just south of Pyramid Butte, the final Indian position; and continues toward the town of Birney. Except for the road, the site is unchanged since 1877. 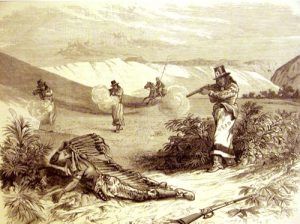 The site is located in Rosebud County, on an unimproved road, about 15 miles southwest of Birney, Montana.

In 2001, the Wolf Mountains Battlefield was listed on the National Register of Historic Places, and in 2008, it became a National Historic Landmark in 2008.