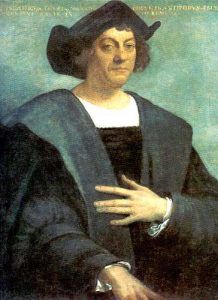 From the death of Christopher Columbus in 1506 to the planting of the first permanent English colony on the shores of America in 1607, just a century elapsed, — a century filled with romantic voyages and thrilling tales of exploration and conquest in the New World. Centuries later, men explored new countries for scientific study of the native races or the soil and its products, or to open up new markets for trade and develop the hidden resources of the land; but in the romantic 16th-century Spanish noblemen tramped through the swamps and tangles of Florida to find the fountain of perpetual youth, or toiled a thousand miles over the western desert, lured by the dazzling gold of fabled cities of splendor. The 16th-century was also a century of intense religious beliefs; so, there was also a grim spirit of missionary zeal mingled with the thirst for gold. The cross was planted in the wilderness, and the soldiers knelt in thanksgiving on the ground stained by the blood of their heretical neighbors.

But, it was Asia with its fabulous wealth, which was the real goal of European explorers. America was an obstacle. Even far into the 17th-century, the mariners were searching the northern coast of America for a way around the continent, and hailing the broad mouth of each new river as a possible passage to the Indies.

Christopher Columbus, in his fourth voyage in 1502, skirted the coast of Central America, in hopes of finding a passage to Cathay (China), while Italian explorer, Amerigo Vespucci, in his great voyage of 1501-1502, followed the South American coast far enough to demonstrate that he had found a “new world,” even if he had not discovered a gateway to the East. 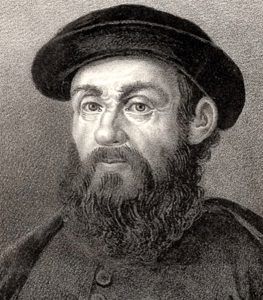 A third mariner was also diligently searching for a way to the Indies — Ferdinand Magellan. A Portuguese explorer in the service of Spain, Magellan, along with five ships and about 300 men started on what proved to be perhaps the most romantic voyage in history in September 1519.

Reaching the Brazilian coast, he made his way south, and after quelling a dangerous mutiny in his winter quarters on the bleak coast of Patagonia, entered the narrow straits (afterward called the Straits of Magellan) at the extremity of South America. A stormy passage of five weeks through the tortuous narrows brought the ships out on the calm waters of an ocean to which, in grateful relief, he gave the name “Pacific.”

But, Magellan was to meet worse trials than storms, when he put out into the great ocean. Week after week, he sailed westward across the interminable sea, little dreaming that he had embarked on waters which cover nearly half the globe. Hunger grew to starvation, to thirst, to madness. Twice on the voyage of 10,000 miles, land appeared to the eyes of the famished sailors, only to prove a barren, rocky island. At last, the inhabited islands of Australia were reached. Magellan himself was killed in a fight with the natives of the Philippine Islands, but his sole seaworthy ship, the Victoria, continued westward across the Indian Ocean and rounding the Cape of Good Hope, reached Lisbon, Spain with a crew of 18 “ghostlike men,” on September 6, 1522.

Magellan’s ship had circumnavigated the globe. His grand voyage proved conclusively that the earth was round and showed the great preponderance of water over land. It also demonstrated that America was not a group of islands off the Asiatic coast (as Columbus had thought), nor even a southern continent reaching down in a peninsula from the corner of China, but a continent set in its own hemisphere, and separated on the west from the old world of Cathay, by a far greater expanse of water than on the east from the old world of Europe. It still required generations of explorers to develop the true size and shape of the western continent; but, Magellan’s voyage had located the continent at last in its relation to the known countries of the world. 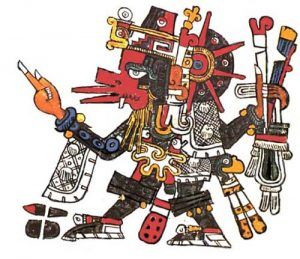 While Magellan’s starving sailors were battling their way across the Pacific Ocean, stirring scenes were being enacted in Mexico. The Spaniards, starting from Haiti as a base, had conquered and colonized Puerto Rico and Cuba in 1508 and sent expeditions west to the Isthmus of Panama in 1513 and north to Florida the same year. In 1519 Hernando Cortez, a Spanish adventurer of great courage and wisdom was sent by the governor of Cuba to conquer and plunder the rich Indian kingdom which explorers had found to the north of the isthmus. This was the Aztec confederacy of Indian tribes under the Emperor Montezuma. The land was rich in silver and gold; the people were skilled in art and architecture. They had an elaborate religion with splendid temples but practiced the cruel rite of human sacrifices. Their capital city of Mexico was situated on an island in the middle of a lake and approached by four causeways from the four cardinal points of the compass.

One of their religious legends told of a fair-haired god of the sky (Quetzalcoatl), who had been driven out to sea, but who would return again to rule over them in peace and plenty. When the natives saw the Spaniard with his “white-winged towers” moving on the sea, they thought that the “fair god” had returned. Cortez was not slow to follow up this advantage. His belching cannon and armored knights increased the superstitious awe of the natives. He seized their ruler, Montezuma, captured their capital city, Mexico, and made their ancient and opulent realm a dependency of Spain in 1521. It was the first sure footing of the Spaniards on the American continent and served as an important base for further exploration and conquest.

The twenty years following Cortez’s conquest of Mexico marked the height of Spanish exploration in America. From Kansas to Chile, and from the Carolinas to the Pacific Ocean, the flag and speech of Spain were carried. No feature of excitement and romance is absent from the vivid accounts which the heroes of these expeditions have left us. 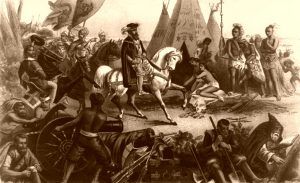 Now, it is a survivor of shipwreck — Cabeza de Vaca — in the Mexican Gulf, making his way from tribe to tribe across the vast stretches of Texas and Mexico to the Gulf of California; now it is the ruffian Captain Gonzalo Pizarro, repeating south of the isthmus the conquest of Cortez, and adding the untold wealth of the silver mines of Peru to the Spanish treasury; now it is the noble governor Hernando de Soto, with his train of 600 knights in “doublets and cassocks of silk” and his priests in splendid vestments, with his Portuguese in shining armor, his horses, hounds, and hogs, all ready for a triumphal procession to kingdoms of gold and ivory — but doomed to toil, with his famished and ambushed host, through tangle and swamp from Georgia to Arkansas, and finally to leave his fever-stricken body at the bottom of the Mississippi River; now it is Francisco Coronado and his 300 followers, intent on finding the seven fabled cities of Cibola, and chasing the golden mirage of the western desert from the Pacific coast of Mexico to the present state of Kansas. 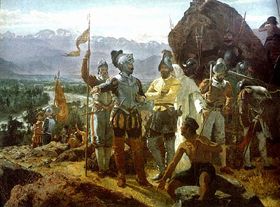 For all this vast expenditure of blood and treasure, not a Spanish settlement existed north of the Gulf of Mexico in the middle of the 16th-century. The Spaniards were gold seekers, not colonizers. They had found a few Indians living in cane houses and mud pueblos, but the fountain of perpetual youth and the cities of gold they had not found. They could not, of course, foresee the wealth which one day would be derived from the rich lands through which they had so painfully struggled; and the survivors returned to the Mexican towns discouraged and disillusioned.

South and west of the Gulf of Mexico, however, in the islands of the West Indies, the Spaniards had built up a huge empire. The discovery of gold in Haiti and the conquest of the rich treasures of Mexico and Peru brought thousands of adventurers and tens of thousands of African-American slaves to tropical America. Spain governed the American lands despotically. Commerce and justice were exclusively regulated through the “India House” at Seville and Spanish culture was introduced. In the year 1536 a printing press was set up, and shortly after the middle of the century, universities were opened in Mexico and Peru. The essential features of the Spanish government also were brought across the ocean — its absolutism in government and in religion. Trade was restricted to certain ports; heretics and their descendants to the third generation were excluded from the colonies; the natives were almost exterminated by the rigors of the slave driver in the mines. The land was the property of the sovereign, and by him was granted to nobles, who, under the guise of protecting and converting the natives, made their fiefs great slave estates, and treated both Indians and African-Americans with frightful severity.

In spite of these evil features, however, Spanish colonization was a boon to the New World. The Spaniards introduced European methods of cultivation into the rich islands of Cuba, Puerto Rico, Haiti, and Jamaica, and opened precious veins of gold and silver in Mexico and Peru. They built cities, dredged and fortified harbors, founded schools and universities, erected cathedrals and palaces. Spain, welded into a nation by the union of the crowns of Aragon and Castile, her king elevated to the throne of the Holy Roman Empire in the person of Charles V, was the most powerful state in Europe in the 16th Century. Gold from the American mines enhanced the splendor of her throne, and her civilization, in turn, was reflected in her colonies in the New World. The decline of Spain’s power began; however, with the wars which Charles’s despotic son Philip II waged to crush the liberty of his Dutch subjects, and the repulse which his great Armada met at the hands of Queen Elizabeth’s seamen in 1588. When the sixteenth century closed the vigor of Spanish colonization was gone.