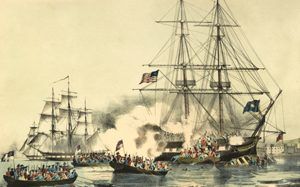 When the American colonies declared their independence from Great Britain, the infant nation was in no position to defy British rule of the seas. Britain’s navy in 1776 was the world’s most powerful. States individually outfitted vessels of war and Congress established a navy, but it was a slow beginning. At no point in the conflict did the American naval forces have adequate resources to confront the Royal Navy on its own terms. The Royal Navy—once the protector of American shipping—now made every effort to suppress and destroy it. The Americans responded to the situation with the time-honored practice of privateering. American privateering activity during the American Revolution became an industry born of necessity that encouraged patriotic private citizens to harass British shipping while risking their lives and resources for financial gain.

European governments regularly issued documents known as Letters of Marque and Reprisal to legitimize privately outfitted men-of-war. In a tradition dating back to the Middle Ages, under highly regulated conditions, these documents authorized private parties to attack enemy vessels. Without the documentation, these same activities were considered acts of piracy and subject to prosecution. If a privateer captured an enemy ship (known as a prize), an admiralty prize court had to approve the seizure. Then, the proceeds from the sale of the prize and its cargo were shared among the owners and crew of the privateer according to a pre-arranged contract.

Privateering encompassed two levels of participation. A Letter of Marque authorized armed merchant ships to challenge any likely enemy vessel that crossed its path during the course of a commercial voyage. A Privateer Commission was issued to vessels, called privateers or cruisers, whose primary objective was to disrupt enemy shipping. The ideal target was an unarmed, or lightly armed, commercial ship.

With the passage of an act on March 23, 1776, the Continental Congress formalized the commissioning process, and uniform rules of conduct were established. Owners of privateers had to post monetary bonds to ensure their proper conduct under the regulations. 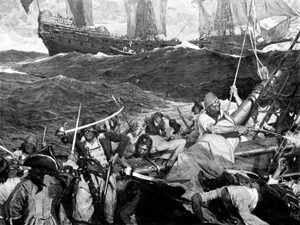 Although the documentation is incomplete, about 1,700 Letters of Marque, issued on a per-voyage basis, were granted during the American Revolution. Nearly 800 vessels were commissioned as privateers and are credited with capturing or destroying about 600 British ships.

Vessels of every size and description were pressed into service as privateers. At the upper end of the scale was the 600-ton, 26-gun ship Caesar of Boston. At the other end was the 8-ton boat Defense of Falmouth, Massachusetts. Crews ranged from a few men in a whaleboat to more than 200 aboard a large, fully equipped privateer. Two-masted schooners and brigantines were most often used in privateering, reflecting the kind of vessels available to American seamen.

Privateers achieved the best results if they could bluff an opponent into believing opposition was futile. When this failed the result was often vicious combat with unpredictable results. Many privateers were captured or sunk when the odds were against them. In spite of all the risks and hazards, the overall effort to cripple Britain’s commercial fleet was highly effective, and fortunes destined to finance the new republic were made. It is estimated that the total damage to British shipping by American privateers was about $18 million by the end of the war or just over $302 million in today’s dollars.