Excerpted from The Spanish Borderlands: A chronicle of old Florida and the Southwest, edited by Herbert Eugene Bolton, 1918 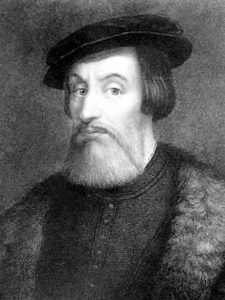 By the mid 1500’s Spanish interest in Florida had been aroused by the journey of Cabeza De Vaca, who had explored part of the area in April, 1528. Though only four of the 600 men of the expedition survived, their tales of the people and resources aroused the interest of Spanish authorities. This interest was was quickened to a lively heat when, late in 1543, Luis de Moscoso Alvarado and the remnants of Hernando De Soto’s band at last straggled into Mexico City. It would appear that hardships and failures could not impair a Spaniard’s ability for story-telling; for Moscoso and his tattered comrades were soon spinning for others the golden web of romance in which they themselves had been snared. Glowing pictures they gave of the north country, especially of Coosa (in Alabama), where they had been well fed and where one or two of their number had remained to dally with Creek damsels. The Viceroy Antonio de Mendoza, ambitious to extend his power into the Northern Mystery, at once offered to finance an expedition if Luis de Moscoso Alvarado would undertake it. But, while Moscoso’s zeal for golden Florida might inspire his imagination to dazzling flights of fancy, it was inadequate to stir his feet one step again in that direction. So, Mendoza’s project came to nothing.

It was noticed that the Mexicans valued highly some of the fur apparel brought back by Moscoso’s men. And the next year in 1544, two Spanish gentlemen sought from the King the right to conquer Florida, for the purpose of bringing deer skins and furs into Mexico, as well as in the hope of discovering pearls, mines, and whatever other marvels had embroidered Moscoso’s romance. But, the King refused their petition. In his refusal, he was influenced in part by religious and humane motives. Despite the presence of priests and friars, the various expeditions to the north thus far had taken no time from treasure hunting to convert natives or to establish missions. The Church was now considering the question of sending out its own expedition to Florida, unhampered by slave-catching soldiers.

Perhaps this idea of a conquest by the Cross, unaided — and unhampered — by the sword, was born in the mind of Fray Luis Cancer, a devout and learned Dominican. Fray Luis was living in the convent of Santo Domingo in Mexico City not long after Cabeza De Vaca and Luis de Moscoso Alvarado arrived with their wonder tales. The account of the hundreds of savages who had followed Vaca from village to village must have moved the good friar’s heart with zeal and pity. And, he can have been no less stirred by the tales told by Moscoso’s men of the gallant butchery their swords had done — of the clanking chains that made music on the day’s march, and the sharp whisper in the night of the flint, as it pressed against an iron collar. Fray Luis desired to see all heathen made free in God’s favor. The oppressions his countrymen practiced upon the natives filled him with horror. As a missionary, first in Espanola and then in Puerto Rico, he had seen the hopelessness of trying to spread religion in territories which were being swiftly depopulated by ruthless conquerors. He had therefore gone to Guatemala, to the monastery of Santiago whose head was the noble Las Casas. At that time, one province of Guatemala was known as the “Land of War” because of the ferocity of its natives. Las Casas had influenced the Governor to forbid that territory to Spaniards for five years. Then, he had sent Fray Luis, who had meanwhile learned the language of the natives, to the chief to request permission for the monks to come there. With his gentle words, Fray Luis took also little gifts, trinkets, mirrors, and beads of bright colors such as would delight the Indians.

He made so good an impression on the chief that the permission he sought was readily given. And, in a few years the Land of War became the Land of the True Peace — Vera Paz — where no Spaniards dwelt, save a few Dominican friars, and where at morning and evening Indian voices chanted the sacred songs to the accompaniment of the Indian flutes and drums which had formerly quickened to frenzy the warriors setting out to slaughter. And, for this spiritual conquest Fray Luis had received the title of Alferez de la Fe, Standard Bearer of the Faith.

But, Fray Luis was not content to eat the fruit of his labors in Vera Paz. The Standard Bearer would push on to another frontier. He went to Mexico City in 1546 because he would find the latest reports of newly discovered countries. Here, Fray Luis heard the stories which had been told there by Cabeza De Vaca and Luis de Moscoso Alvarado and resolved to bear his standard to Florida. 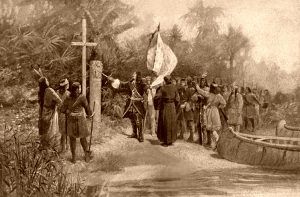 He found willing comrades in three monks of his own order, Gregorio de Beteta, Juan Garcia, and Diego de Tolosa. Fray Gregorio and Fray Juan had already made three or four unsuccessful attempts to reach Florida by land from Mexico, with a total misapprehension as to distance and direction. His plans consummated under the orders of Las Casas, Fray Luis went to Spain to urge the great project with the King. His petition was soon granted. When he returned to Mexico in 1548 he had the royal authority to establish a mission at some point in Florida where Spaniards had not yet spilled native blood. In 1549, Fray Luis and his three companions sailed from Vera Cruz in an unarmed vessel. At Havana he took on board, a converted native girl named Magdalena, who was to act as interpreter and guide. Perhaps it was almost impossible for the pilot to distinguish one inlet from another, with certainty, on that much indented coast line, where the low shore presents no variation to the eye for miles; for, instead of landing at a new point, the monks first touched Florida soil in the vicinity of Tampa Bay. And, the natives about Tampa Bay were hostile, with memories of Hernando De Soto.

There were empty huts nearby and a background of forest in which it seemed nothing stirred. Fray Diego went ashore and climbed a tree at some distance from the beach. Immediately, a score of Indians emerged from the forest. Fray Luis, despite the pilot’s warnings, with Magdalena and an another monk named Fuentes, hurried after Diego, through water to their waists. “Our Lord knows what haste I made lest they should slay the monk before hearing what we were about,” Fray Luis writes. He paused to fall on his knees and pray for grace and divine help, as he climbed the bank.