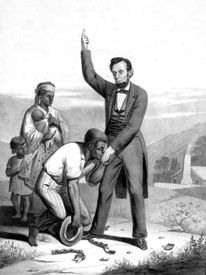 For many others in various parts of the country, the day was just beginning, for the celebrations were not considered official until word was received that the President had actually signed the Proclamation. The slaves of the District of Columbia did not have to wait, however, for back in April 1862 the Congress had passed a law setting them free. Even so, they joined in the widespread celebrations on New Year’s Day. At Israel Bethel Church, Rev. Henry McNeal Turner went out and secured a copy of the Washington Evening Star that carried the text of the Proclamation. Back at the church, Turner waved the newspaper from the pulpit and began to read the document. This was the signal for unrestrained celebration characterized by men squealing, women fainting, dogs barking, and whites and blacks shaking hands. The Washington celebrations continued far into the night. In the Navy Yard, cannons began to roar and continued for some time.

In New York the news of the Proclamation was received with mixed feelings. Blacks looked and felt happy, one reporter said, while abolitionists “looked glum and grumbled . . . that the proclamation was only given on account of military necessity.” Within a week, however, there were several large celebrations in which abolitionists took part. At Plymouth Church in Brooklyn, the celebrated Henry Ward Beecher preached a commemorative sermon to an overflow audience. “The Proclamation may not free a single slave,” he declared, “but it gives liberty a moral recognition.” There was still another celebration at Cooper Union on January 5. Several speakers, including the veteran abolitionist Lewis Tappan, addressed the overflow audience. Music interspersed the several addresses. Two of the renditions were the “New John Brown Song” and the “Emancipation Hymn.”

A veritable galaxy of leading literary figures gathered in the Music Hall in Boston to take notice of the climax of the fight that New England abolitionists had led for more than a generation. Among those present were John Greenleaf Whittier, Henry Wadsworth Longfellow, Oliver Wendell Holmes, Harriet Beecher Stowe, Francis Parkman, and Josiah Quincy. Toward the close of the meeting, Ralph Waldo Emerson read his “Boston Hymn” to the audience. In the evening, a large crowd gathered at Tremont Temple to await the news that the President had signed the Proclamation. Among the speakers were Judge Thomas Russell, Anna Dickinson, Leonard Grimes, William Wells Brown, and Frederick Douglass. Finally, it was announced that “It is coming over the wire,” and pandemonium broke out! At midnight, the group had to vacate Tremont Temple, and from there they went to the Twelfth Baptist Church at the invitation of its pastor, Leonard Grimes. Soon the church was packed, and it was almost dawn when the assemblage dispersed. Frederick Douglass pronounced it a “worthy celebration of the first step on the part of the nation in its departure from the thraldom of the ages.”

The trenchant observation by Douglass that the Emancipation Proclamation was but the first step could not have been more accurate. Although the Presidential decree would not free slaves in areas where the United States could not enforce the Proclamation, it sent a mighty signal both to the slaves and to the Confederacy that enslavement would no longer be tolerated. An important part of that signal was the invitation to the slaves to take up arms and participate in the fight for their own freedom. That more than 185,000 slaves as well as free blacks accepted the invitation indicates that those who had been the victims of thraldom were now among the most enthusiastic freedom fighters.

Meanwhile, no one appreciated better than Lincoln the fact that the Emancipation Proclamation had a quite limited effect in freeing the slaves directly. It should be remembered, however, that in the Proclamation he called emancipation “an act of justice,” and in later weeks and months he did everything he could to confirm his view that it was An Act of Justice. And no one was more anxious than Lincoln to take the necessary additional steps to bring about actual freedom. Thus, he proposed that the Republican Party include in its 1864 platform a plank calling for the abolition of slavery by constitutional amendment. When he was “notified” of his re-nomination, as was the custom in those days, he singled out that plank in the platform calling for constitutional emancipation and pronounced it “a fitting and necessary conclusion to the final success of the Union cause.” Early in 1865, when Congress sent the amendment to Lincoln for his signature, he is reported to have said, “This amendment is a King’s cure for all the evils. It winds the whole thing up.”

Despite the fact that the Proclamation did not emancipate the slaves and surely did not do what the Thirteenth Amendment did in winding things up, it is the Proclamation and not the Thirteenth Amendment that has been remembered and celebrated over the past 130 years. That should not be surprising. Americans seem not to take to celebrating legal documents. The language of such documents is not particularly inspiring, and they are the product of the deliberations of large numbers of people. We celebrate the Declaration of Independence, but not the ratification of the Constitution. Jefferson’s words in the Declaration moved the emerging Americans in a way that Madison’s committee of style failed to do in the Constitution.

Thus, almost annually — at least for the first hundred years — each New Year’s Day was marked in many parts of the country by a grand celebration. Replete with brass band, if there was one, an African-American fire company, if there was one, and social, religious, and civic organizations, African Americans of the community would march to the courthouse, to some church, or the high school. There, they would assemble to hear the reading of the Emancipation Proclamation, followed by an oration by a prominent person. The speeches varied in character and purpose. Some of them urged African Americans to insist upon equal rights; some of them urged frugality and greater attention to morals; while still others urged their listeners to harbor no ill will toward their white brethren.

As the 50th anniversary of the Proclamation approached, James Weldon Johnson, already a writer of some distinction, was serving a tour of duty as U.S. Consul in Corinto, Nicaragua. His biographer, Eugene Levy, tells us that Johnson for some time had considered writing a poem commemorating the 50th anniversary of the Emancipation Proclamation. In September 1912, when he read of the ceremonies marking the Preliminary Proclamation, he realized that he had only 100 days in which to write the poem. Using all of his spare time, of which there was little, Johnson hammered out “Fifty Years.” There was not enough time to publish it in one of the major literary monthly journals, so he turned to the New York Times, which published it on its editorial page on January 1, 1913.

O Brothers mine, to-day we stand
Where half a century sweeps our ken,
Since God, through Lincoln’s ready hand,
Struck off our bonds and made us men.

Just fifty years–a winter’s day–
As runs the history of a race;
Yet, as we look back o’er the day,
How distant seems our starting place!”

Then, in a more assertive tone, making certain that humility did not replace self-confidence, he said:

Then should we speak but servile words,
Or shall we hang our heads in shame?
Stand back of new-come foreign hordes,
And fear our heritage to claim?

No! stand erect and without fear,
And for our foes let this suffice–
We’ve bought a rightful sonship here,
And we have more than paid the price. . . .

That for which millions prayed and sighed
That for which tens of thousands fought,
For which so many freely died,
God cannot let it come to naught.”