The Emancipation Proclamation – An Act of Justice 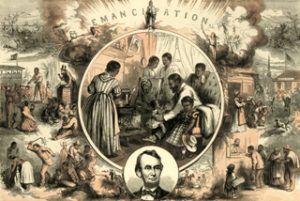 Thursday, January 1, 1863, was a bright, crisp day in the nation’s capital. The previous day had been a strenuous one for President Abraham Lincoln, but New Year’s Day was to be even more strenuous. So he rose early. There was much to do, not the least of which, was to put the finishing touches on the Emancipation Proclamation. At 10:45 the document was brought to the White House by Secretary of State William Seward. The President signed it, but he noticed an error in the superscription. It read, “In testimony whereof I have hereunto set my name and caused the seal of the United States to be affixed.” The President had never used that form in proclamations, always preferring to say “In testimony whereof I have hereunto set my hand. . . .” He asked Seward to make the correction, and the formal signing would be made on the corrected copy.

The traditional New Year’s Day reception at the White House began that morning at 11 o’clock. Members of the Cabinet and the diplomatic corps were among the first to arrive. Officers of the Army and Navy arrived in a body at half past 11. The public was admitted at noon, and then Seward and his son Frederick, the Assistant Secretary of State, returned with the corrected draft. The rigid laws of etiquette held the President to his duty for 3 hours, as his secretaries Nicholay and Hay observed. “Had necessity required it, he could of course have left such mere social occupation at any moment,” they pointed out, “but the President saw no occasion for precipitancy. On the other hand, he probably deemed it wise that the completion of this momentous executive act should be attended by every circumstance of deliberation.”

After the guests departed, the President went upstairs to his study for the signing in the presence of a few friends. No Cabinet meeting was called, and no attempt was made to have a ceremony. Later, Lincoln told F. B. Carpenter, the artist, that as he took up the pen to sign the paper, his hand shook so violently that he could not write. “I could not for a moment control my arm. I paused, and a superstitious feeling came over me which made me hesitate. . . . In a moment I remembered that I had been shaking hands for hours with several hundred people, and hence a very simple explanation of the trembling and shaking of my arm.” With a hearty laugh at his own thoughts, the President proceeded to sign the Emancipation Proclamation. Just before he affixed his name to the document, he said, “I never, in my life, felt more certain that I was doing right than I do in signing this paper.” 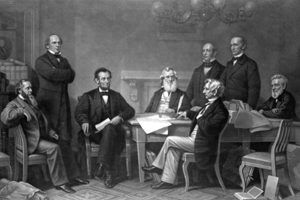 First reading of the Emancipation Proclamation before the cabinet, Francis B. Carpenter,1866

When I made my first serious study of this document, several copies of the December 30 draft were in existence. The copies of Cabinet officers Edward Bates, Francis Blair, William Seward, and Salmon P. Chase were in the Library of Congress. The draft that the President worked with on December 31 and the morning of New Year’s Day is considered the final manuscript draft. The principal parts of the text are written in the President’s hand. The two paragraphs from the Preliminary Proclamation of September 22, 1862, were clipped from a printed copy and pasted on to the President’s draft, “merely to save writing.” The superscription and the final closing are in the hand of a clerk in the Department of State. Later in the year, Lincoln presented his copy to the ladies in charge of the Northwestern Fair in Chicago. He told them that he had some desire to retain the paper, “but if it shall contribute to the relief and comfort of the soldiers, that will be better,” he said most graciously. Thomas Bryan purchased it and presented it to the Soldiers’ Home in Chicago, of which he was president. The home was destroyed in the Great Chicago Fire of 1871. Fortunately, four photographic copies of the original had been made. The official engrossed document is in the National Archives and follows Lincoln’s original copy.

It is worth observing that there was no mention, in the final draft, of Lincoln’s pet schemes of compensation and colonization, which were in the Preliminary Proclamation of September 22, 1862. Perhaps Lincoln was about to give up on such impracticable propositions. In the Preliminary Proclamation, the President had said that he would declare slaves in designated territories “thenceforward, and forever free.” In the final draft of January 1, 1863, he was content to say that they “are, and henceforward shall be free.” Nothing had been said in the preliminary draft about the use of blacks as soldiers. In the summer of 1862 the Confiscation Act had authorized the President to use blacks in any way he saw fit, and there had been some limited use of them in non-combat activities. In stating in the Proclamation that former slaves were to be received into the armed services, the President believed that he was using congressional authority to strike a mighty blow against the Confederacy.

It was late afternoon before the Proclamation was ready for transmission to the press and others. Earlier drafts had been available, and some papers, including the Washington Evening Star had used those drafts, but it was at about 8 p.m. on January 1 that the transmission of the text over the telegraph wires actually began.

Young Edward Rosewater, scarcely 20 years old, had an exciting New Year’s Day. He was a mere telegraph operator in the War Department, but he knew the President and had gone to the White House reception earlier that day and had greeted him. When the President made his regular call at the telegraph office that evening, young Rosewater was on duty and was more excited than ever. He greeted the President and went back to his work. Lincoln walked over to see what Rosewater was sending out. It was the Emancipation Proclamation! If Rosewater was excited, the President seemed the picture of relaxation. After watching the young operator for a while, the President went over to the desk of Tom Eckert, the chief telegraph operator in the War Department, sat in his favorite chair, where he had written most of the Preliminary Proclamation the previous summer, and gave his feet the proper elevation. For him, it was the end of a long, busy, but perfect day.