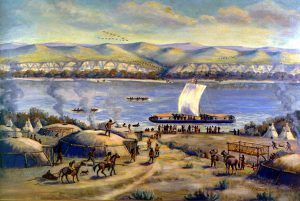 Lewis and Clark on the Upper Missouri River.

When, in 1803, those two immortal youths, Meriwether Lewis and William Clark, were about to go forth on their great journey across the continent, they were admonished by President Thomas Jefferson that they would in all likelihood encounter in their travels, living and stalking about, the mammoth or the mastodon, whose bones had been found in the great salt-licks of Kentucky. We smile now at such a supposition, yet it was not unreasonable then. No man knew that tremendous country that lay beyond the mouth of the Missouri River.

The explorers crossed one portion of a vast land which was like to nothing they had ever seen–the region later to become the great cattle-range of America.

It reached, although they could know nothing of that, from the Spanish possessions on the south across a thousand miles of short grasslands to the present Canadian boundary line which certain obdurate American souls still say ought to have been at 54 degrees 40 minutes, and not where it is!

From the Rio Grande to “Fifty-four forty,” indeed, would have made nice measurements for the Saxon cattle-range.

The Plains of Southwest Kansas

Little, however, was the value of this land understood by the explorers; and, for more than half a century afterward, it commonly was supposed to be useless for the occupation of white men and suitable only as a hunting-ground for savage tribes. Most of us can remember the school maps of our own youth, showing a vast region marked, vaguely, “The Great American Desert,” which was considered hopeless for any human industry, but much of which has since proved as rich as any land anywhere on the globe.

Perhaps it was the treeless nature of the vast Plains which carried the first idea of their infertility. When the first settlers of Illinois and Indiana came up from south of the Ohio River they had their choice of timber and prairie lands. Thinking the prairies worthless–since land which could not raise a tree certainly could not raise crops–these first occupants of the Middle West spent a generation or more, ax in hand, along the heavily timbered river-bottoms. The prairies were long in settling. No one then could have predicted that farmlands in that region would be worth three hundred dollars an acre or better and that these prairies of the Mississippi Valley would, in a few generations, be studded with great towns and would form a part of the granary of the world. 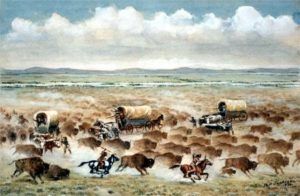 Buffalo along the Oregon Trail

But, if our early explorers, passing beyond the valley of the Missouri, found valueless the region of the Plains and the foothills, not so the wild creatures or the Indians who had lived there longer than science records. The buffalo then ranged from the Rio Grande to the Athabaska, from the Missouri River to the Rockies, and beyond. No one seems to have concluded in those days that there was after all slight difference between the buffalo and the domestic ox. The native cattle, however, in untold thousands and millions, had even then proved beyond peradventure the sustaining and strengthening nature of the grasses of the Plains.

Now, each creature, even of human species, must adjust itself to its environment. Having done so, commonly it is disposed to love that environment. The Eskimo and the Zulu each thinks that he has the best land in the world: So with the American Indian, who, supported by the vast herds of buffalo, ranged all over that tremendous country which was later to be given over to the white man with his domestic cattle. No freer life ever was lived by any savages than by the Horse Indians of the Plains in the buffalo days; and never has the world known a physically higher type of savage.

On the buffalo range — that is to say, on the cattle-range which was to be–Lewis and Clark met several bands of the Sioux—the Mandan and the Assiniboine, the Blackfoot, the Shoshone.

Farther south were the Pawnee, the Kaw, the Otoe, the Osage, most of whom depended in part upon the buffalo for their living, though the Otoe, the Pawnee, the Mandan, and certain others now and then raised a little corn or a few squashes to help out their bill of fare. Still farther south dwelt the Kiowa, the Comanche, and others. The Arapaho, the Cheyenne the Crow, and the Ute, all hunters, were soon to come into the ken of the white man. Of such of these tribes as they met, the youthful captains made accounting, gravely and with extraordinary accuracy, but without discovering in this region much future for Americans. They were explorers and not industrial investigators.

It was nearly half a century after the journey of Lewis and Clark that the Forty-Niners were crossing the Plains, whither, meanwhile, the Mormons had trekked in search of a country where they might live as they liked. Still, the wealth of the Plains remained untouched. California was in the eyes of the world. The great cow-range was overleaped. But, in the early fifties, when the placer fields of California began to be less numerous and less rich, the half-savage population of the mines roared on northward, even across our northern line. Soon it was to roll back. Next it worked east and southeast and northeast over the great dry plains of Washington and Oregon, so that, as readily may be seen, the cow-range proper was not settled as most of the West was, by a directly westbound thrust of an eastern population; but, on the contrary, it was approached from several different angles–from the north, from the east, from the west and northwest, and finally from the south.

The early, turbulent population of miners and adventurers was crude, lawless, and aggressive. It cared nothing whatever for the Indian tribes. War, instant and merciless, where it meant murder, for the most part, was set on foot as soon as white touched red in that far western region.

All these new white men who had crowded into the unknown country of the Plains, the Rockies, the Sierras, and the Cascades, had to be fed. They could not employ and remain content with the means by which the red man there had always fed himself. Hence a new industry sprang up in the United States, which of itself made certain history in that land. The business of freighting supplies to the West, whether by bull-train or by pack-train, was an industry sui generic, very highly specialized, and pursued by men of great business ability as well as by men of great hardihood and daring.

Each of these freight trains which went West carried hanging on its flank more and more of the white men. As the trains returned, more and more was learned in the States of the new country which lay between the Missouri River and the Rockies, which ran no man knew how far north, and no man could guess how far south. Now appears in history Fort Benton, Montana on the Missouri River, the great northern supply post — just as at an earlier date there had appeared Fort Hall, Idaho, one of the old fur-trading posts beyond the Rockies, Bent’s Fort on the Arkansas River in Colorado, and many other outposts of the new Saxon civilization in the West.