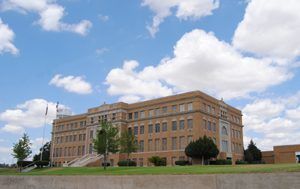 In the beginning, the courthouse was temporarily housed in an office building in downtown Stinnett. But, plans were immediately made to build a new one. Designed by Amarillo architect William C. Townes and built by local contractor C. S. Lambie & Company, the Spanish renaissance revival style building was built of brick and concrete in 1927. It features cut-stone ornamentation, a 3-bay primary facade with grand entry bay, a raised basement with end entries, metal sash windows and second-floor windows with round-arch stone lintels. Friezes at the east and west entrances of the courthouse depict the petroleum, farm and ranch, and cattle industries, historically the three principal commercial enterprises in the area. Until 1982, the building also housed a rooftop jail and sheriff’s quarters until remodeling occurred and the jail was moved. The building was recorded as a Texas Historic Landmark in 1962 and is also on the National Register of Historic Places.

In 1927, Phillips started up its first petroleum refinery three miles northeast of Borger, Texas. The refinery was designed to produce gasoline as an automotive fuel, as well as other products. The company opened its first service station, to sell gasoline, in Wichita, Kansas on November 19, 1927. As the company developed, so did the town of Phillips, which would later have a peak population of some 4,200 people. 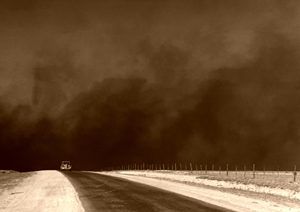 In 1929, J.M. Huber came to Borger, where he established an Ink Plant and a Carbon Black Plant. Carbon black was a principal ingredient in the ink that was processed at the adjacent plant. Within a decade there were 33 plants processing carbon black in the area giving Borger the name Blacktown.

The decade of the 1930s was a mixture of boom and depression for Hutchinson County. The nation was going through the Great Depression, and the great storms of the Dust Bowl had begun. These hard times drove many a settler away from the area. However, there was also much work to be found in the oil fields and plants. But, in the end, these circumstances ended the boom, devastated farms, and caused petroleum prices to drop. But, Hutchinson County wouldn’t suffer nearly as much as the rest of the nation. Many an “Okie” migrant, fleeing from their devastated farms, found jobs in the oilfields and plants. In the meantime, largely due to an expansion of winter-wheat production, the number of farms in the county actually increased during the 1930s to reach 183 by 1940, at which time the population of the county had grown to 19,069. 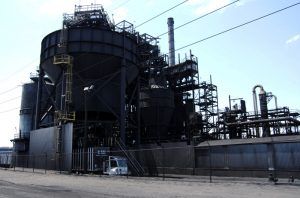 World War II saw a resurgence in the carbon black industry and the establishment at Bunavista, west of Borger, of a carbon black plant by the U.S. Government. Over the next decades, numerous more plants would move into the Hutchinson County, primarily in or near Borger. Some of these included the Philtex Plant, Camex Anydrous Ammonia, the Huber tool-making plant, the Natural Gas Liquids Center, a Copolymer Plant, and many others. The county’s population rose to 31,580 by 1950 and peaked just five years later at 35,685. In 1958, Government air pollution standards required that filters be installed at the carbon black plants and the black clouds so characteristic of Borger in the early days ceased to exist.

Tourism and recreation were enhanced in 1965 with the completion of Sanford Dam, which impounded Lake Meredith on the Canadian River. Located about ten miles west of Borger, in Hutchinson County, the lake once extended into Moore and Potter counties. A. A. Meredith, former Borger city manager, devised the project, which was built and financed by the federal government under the jurisdiction of the Bureau of Reclamation and is owned and operated by the Canadian River Municipal Water Authority.

Construction of Sanford Dam began on March 11, 1962, and was completed in 1965. Unfortunately, A. A. Meredith died of cancer in April 1963, two years before the project’s completion. In the beginning, Lake Meredith supplied water to eleven West Texas cities and became a popular recreational area. The nearby town of Sanford began to grow and several resort communities including Lake Meredith Estates and Bugbee Heights were established. 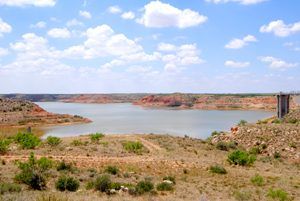 Lake Meredith down some 78 feet from its peak in 1973 in this photo from 2013.
By Kathy Weiser-Alexander.

In April 1973, the lake reached its record high capacity of almost 102 feet deep. Beginning in about 1999; however, drought has plagued the Texas Panhandle, and lake levels dropped year after year. In 2011, withdrawals from Lake Meredith for drinking water ceased, and the Harbor Marina and docks were closed and removed. In 2013, the lake reached its all-time low of 27.14 feet or just or 1.3% capacity. Today, that number has tremendously improved to 75.42 feet (May 2019).

Though the lake is nowhere near what it once was, it still provides opportunities for hiking, swimming, boating, and camping amongst the scenic buttes, pinnacles, and red-brown, wind-eroded coves. Also here is the Alibates Flint Quarries National Monument.

Today, Hutchinson County remains a farming, ranching, and oil-producing region. As oil production declined throughout the years, so did the population. As of the 2010 census, its population was Borger. Borger remains its largest city at about just a little over 13,000 people. Stinnett remains the County Seat and is called home to about 1,900. Other communities include Fritch and Sanford. Phillips, Dial, and Pringle are all but gone.

Dedicated to the Womble Family of Hutchinson County Texas 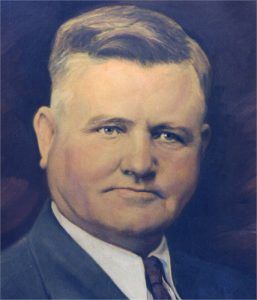 This history of Hutchinson County, Texas and its many places is dedicated to the William Carson Womble Family, who first came to the area in 1902. William Carson Womble, the patriarch of the Hutchinson County, Texas family tree, married Mollie T. Robinson (1876-1964) near Eulogy, Texas at the home of her parents, Mr. and Mrs. W.C. Robinson, on October 14, 1894. The couple moved to Hutchinson County, Texas in 1902. One of their first acquaintances was William “Billy” Dixon of Adobe Walls fame. Dixon was a good and true friend to them until his death. William and Mollie would have 12 children, ten of whom they raised to adulthood. One of these children was Thava Irene Womble Foster, who is Legends’ Founder/Writer, Kathy Weiser-Alexander’s grandmother, and inspiration for this website.