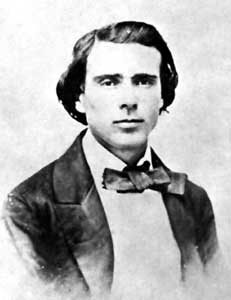 Josiah Gregg was a merchant, trader, explorer, naturalist, and writer who traveled the American West in its early days.

Gregg was born to Savannah and Harmon Gregg in Tennessee on July 19, 1806. He moved with his family to Howard County, Missouri, when he was just a child. Josiah was a sickly boy who tended towards intellectual endeavors, tutoring mathematics while still a child and studying surveying at 16. Around 1825 the family moved to Jackson County, where Josiah opened a school and taught for a year. He wanted to study medicine but was denied an apprenticeship, so he turned to study law. In 1830, however, he became seriously ill with tuberculosis. The following summer, unable to sit on a horse, he joined a caravan headed to Santa Fe, New Mexico, on his doctor’s advice. Starting the trip lying in the back of a wagon, his health improved along the way, and by the time the wagon train reached New Mexico, he had learned to speak Spanish and was bookkeeping for a merchant named Jesse Sutton.

For the next nine years, Gregg crossed the plains four times, becoming a trader and documenting everything he saw. On his last trip, he blazed a new trail from Van Buren, Arkansas, to Santa Fe, which would later be heavily utilized by those rushing to the California Goldfields. By 1842, he was living in Van Buren, Arkansas, and began to write a book of his travels, Commerce of the Prairies, published in 1844.

Still determined to study medicine, he entered a medical college in Louisville, Kentucky, in 1845, and though ill during much of his studies, he was granted a degree the following year. However, instead of practicing medicine, he served as an interpreter and correspondent in the Mexican-American War. Afterward, he practiced medicine in Saltillo, Mexico, until he heard the rumors of the California Gold Rush. In July 1849, he headed for San Francisco. However, the following year, he died after falling from his horse on February 25, 1850.