Bison at the Great Sand Dunes in Colorado

It is believed that buffalo crossed over a land bridge that once connected the Asian and North American continents. Buffalo slowly moved southward through the centuries, eventually reaching as far as Mexico and as far east as the Atlantic Coast, extending south to Florida. But, the largest herds were found on the plains and prairies, from the Rocky Mountains east to the Mississippi River and from Great Slave Lake in Canada to Texas.

Because the great herds were nearly gone before any organized attempts were made to survey populations, it will never be known just how many buffalo once roamed North America. However, estimates range from 30 to 75 million. “The moving multitude…darkened the whole plains,” wrote Lewis and Clark, who encountered a herd at South Dakota’s White River in 1806.

Although the buffalo’s size and color range from light to dark brown vary in different areas of the country, experts generally agree that all American buffalo belong to the same species. The differences in appearance probably result from various environments in which they live.

Like their close relatives, domestic cattle and sheep, buffalo are cloven-hoofed. Both males and females have a single set of hollow, curved horns. The male buffalo, called bulls, are immense, often weighing a ton or more and standing 5 to 6 feet high at the shoulders. The massive head and great hump covered with dark brown wooly hair contrast sharply with the relatively small hips. The females, or cows, are not as massive. Despite their great size and bulkiness, buffalo have excellent mobility, speed, and agility and can sprint at speeds of up to 30 miles per hour.

In the spring, buffalo begin to shed their heavy winter coats, and soon their hair hangs in tatters. Buffalo rub against large stones and trees to hasten shedding and possibly relieve their itching skin. The only remaining long hairs are on the head, forelegs, and hump by late spring. Buffalo wallow in dust or sand to escape the torment of attacking insects. 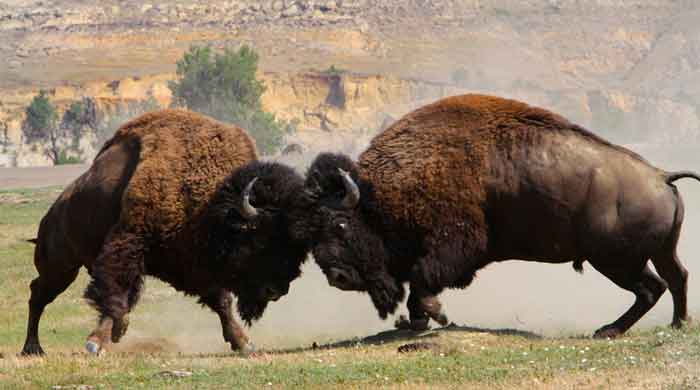 With the arrival of the breeding season in mid-to-late summer, the herds become restless. The bulls, aloof most of the year, now drift among the cows and calves. Noticeably quiet at other times, the bulls bellow hoarsely and become quarrelsome. Many fights occur over females, and the combatants, with lowered heads, paw the earth defiantly.

Cows give birth usually every year to one tawny to buff-colored calf. Most calves are born between the middle of April and the end of May, but some arrive as late as October. At birth, the calves have only a faint suggestion of the hump they will develop later. Buffalo begin grazing, primarily on grasses, while still very young, although some may continue to nurse until they are nearly a year old. Buffalo may live to be about 20 years of age.

By 1800, the small buffalo herds east of the Mississippi River were gone. Buffalo may have been killed to protect livestock and farmlands in that region. With the westward expansion of the American Frontier, systematic reduction of the plains herds began around 1830, when buffalo hunting became the chief industry of the plains. Organized hunters killed buffalo for hides and meat, often killing up to 250 buffalo a day.

Unfortunately, many people also wanted to eradicate buffalo as a way to take away the livelihood and well-being of Native Americans. Native American tribes depended on the buffalo’s meat and hides. Today, many still believe the animal has special spiritual and healing powers, making it an essential part of their culture.

The construction of the railroads across the plains further hastened the depletion of buffalo populations. Hunting from train windows was advertised widely, and passengers shot them as the buffalo raced beside the trains. By 1883, both the northern and the southern herds had been destroyed. Less than 300 wild animals remained in the United States and Canada by the turn of the century out of the millions that once lived there.

Conservation of the buffalo came slowly. In May 1894, Congress enacted a law making buffalo hunting in Yellowstone National Park illegal. Eight years later, money was appropriated to purchase 21 buffalo from private herds to build the Yellowstone herd. This herd has steadily increased with adequate protection until it numbers almost 4,000 animals today. 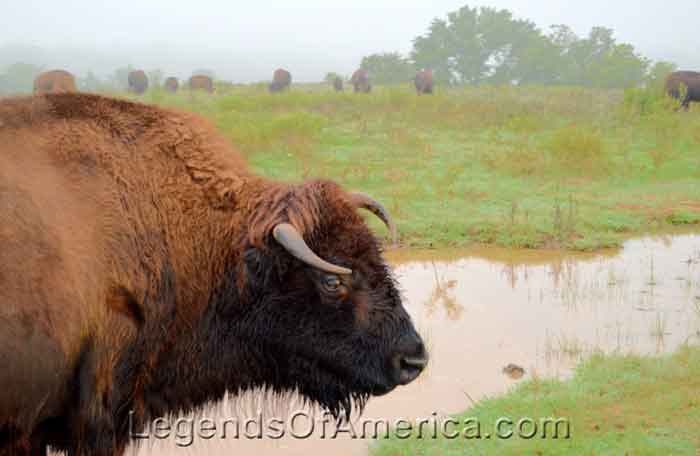 A small Buffalo herd grazes on a foggy morning at Pawnee Bill Ranch in Oklahoma. Photo by Dave Alexander.

Many other private herds have boosted the buffalo’s overall population over the years. While the present herds, numbering about 200,000 buffalo in all, are not as large as the great herds that once ranged the North American continent, they are large enough to ensure the continued well-being of the American buffalo for generations to come. 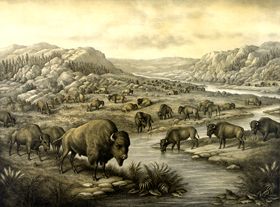