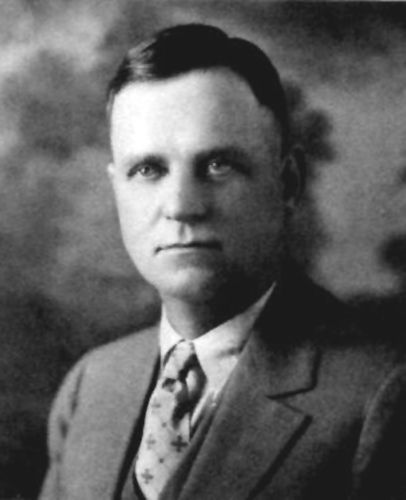 Asa Phillip “Ace” Borger was the town developer and founder of Borger, Texas, Asa Borger, better known as “Ace”, hailed from Carthage, Missouri. He was born to Phillip and Minnie Ann West Borger on April 12, 1888, on the family farm near Carthage. Unfortunately, his father died when he was just six years old. Ace attended school in Carthage and went on to attend business college. He married Elizabeth Willoughby from nearby Sarcoxie, Missouri in 1907 and the couple set up housekeeping in a rented farmhouse near Carthage. The couple would eventually have three children.

Borger first opened and operated a lumber yard in Carthage, but, by 1915, he and his younger brother, Lester Andrew, better known as “Pete”, were selling real estate in the nearby lead mining town of Picher, Oklahoma. Two years later, in 1917, the Borger brothers partnered with Tom Slick, the “King of the Wildcatters”, to develop the oil boomtown of Slick, Oklahoma. Located between Tulsa and Bristow, the fledgling city soon boasted an estimated population of 5,000 people. Today, it is almost a ghost town with about 130 residents.

Next, they developed the town of Cromwell, Oklahoma in the Greater Seminole Oil Field in 1923. At each town, they sold lots, pushed for the building of railroad lines to their towns, and opened hotels, gasoline stations, lumberyards, and other businesses. Though Borger and his family maintained a home for a short time in each of his new towns, he continued to use Carthage, Missouri as his main base of operations. Within weeks, the oil boomtown exploded to a population of thousands. With shades of what to was to come for  Borger,  Texas, Cromwell quickly developed into a wild and wooly town, filled with saloons, brothels, and outlaws. Approximately 150 businesses sold illegal moonshine whiskey and narcotics to the surrounding area. The lawless community soon earned the nickname “Cromwell the Wicked,” and legendary lawman William “Bill” Tilghman was asked to come out of retirement at age 70 to establish law and order.

Though Tilghman had fought with and apprehended some of the worst outlaws of the Old West, he wouldn’t survive the wicked city of Cromwell, Oklahoma. On October 31, 1924, he was shot outside of a cafe called “Ma Murphy’s”, by a corrupt  Prohibition agent named Wiley Lynn. He died early in the morning on November 1st. A month later, the town of Cromwell was set ablaze and every saloon, brothel, fop house and pool hall was reduced to ashes. Though there was no investigation into the massive fire, local lore has it that the city was torched by friends of Bill Tilghman. With the oil already declining, only a few legitimate businesses and churches were rebuilt. Today Cromwell is called home to about 260 people.

As Cromwell declined, Ace Borger turned his attention to the oil boom in the Texas Panhandle. In March 1926, after personally checking out the reports of oil production in Hutchinson County, he and John R. Miller, an attorney and old friend from the Oklahoma boomtowns, purchased 240 acres from rancher John Frank Weatherly, for $50 per acre. Borger then obtained a grant to organize the Borger Townsite Company. The company proceeded to lay out the town and opened the sale of lots on March 8, 1926. By the end of that first day, it had grossed between $60,000 and $100,000, and after six months Borger sold out completely, for more than a million dollars.

He established a lumberyard in Borger and often he took out full-page ads in area papers promoting settlement in Borger and other oil-rich sites throughout west  Texas and eastern New Mexico in which he had bought an interest. He also owned a string of Panhandle wheat elevators and 19,000 acres of farmland in Hansford County. In 1927, he and his brother, Pete, along with Albert S. Stinnett, established the towns of Stinnett and Gruver, Texas, and were influential in making Stinnett the  Hutchinson County seat.

In the meantime, his namesake town of  Borger was developing into a hell-raising place filled with oilmen, roughnecks, prospectors, and panhandlers, along with a bevy of less desirables such as cardsharks, prostitutes, bootleggers, and drug dealers. It was so bad, that the city was nicknamed “Booger Town” as it attracted criminals and fugitives from the law.

The city of Borger became so notorious that in the spring of 1927, Texas Governor Daniel Moody sent a force of Texas Rangers, Captains Frank Hamer and Thomas R. Hickman, to rein in the town. However, these shady elements didn’t scare Ace Borger away. In fact, in 1929, he built the first brick residence in  Borger. The two-story home would become a place for important visitors, as his wife, Elizabeth, lavishly entertained them. The same year that he built his house, crime had once again become so bad in the oil town, that the governor once again sent in the Texas Rangers, as well as the National Guard, and put the whole town under martial law for a month, in order to clean up the undesirable elements once and for all. 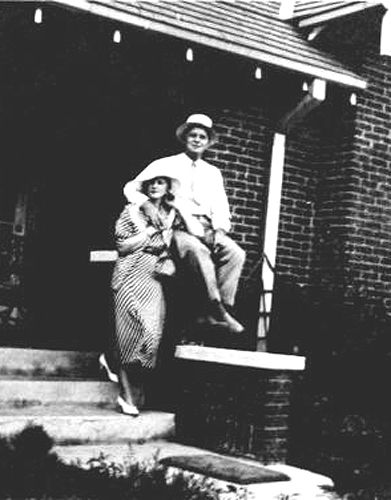 Borger’s overt generosity with friends and acquaintances caused hard feelings among certain of the town’s populace, particularly a man named Arthur Huey who was the  Hutchinson County treasurer. Huey’s dislike for Borger intensified after the Borger State Bank, which Borger had established in June 1930 with himself as president and his son Phillip as vice president, failed, causing a minor panic among local businessmen and small depositors. The elder Borger was later convicted of receiving deposits in the insolvent bank and assessed a two-year prison term, a judgment that he appealed. Meanwhile, Huey was jailed for embezzlement and reportedly asked Borger to help bail him out.

When Borger refused, Huey made threats against his life. On August 31, 1934, Borger was getting his mail at the city post office when, according to witnesses, Huey walked in with a Colt.45, shouted obscenities, and shot him five times. Huey then took Borger’s own.44 and fired four more shots with it. Lloyd Duncan, farm boss for the Magnolia Petroleum Company, was severely wounded by the shots and died five days later. At his trial, which was held in Canadian, Huey claimed that he had shot in self-defense, arguing that Borger was gunning for him. The jury believed him and acquitted him. Three years later, however, he was sent to the state penitentiary for theft of county funds. Ace Borger was buried in Llano Cemetery in Amarillo, Texas.

Borger’s sons, Phillip and Jack, left the area soon after their father’s death. However, their sister, Helen, remained and occupied her parents’ brick with her husband, Fritz Thompson. Ace Borger’s dream house is now a  Texas historical landmark and is still owned by the family. 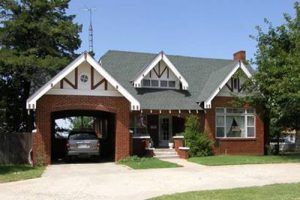 City of Borger
The Handbook of Texas Online