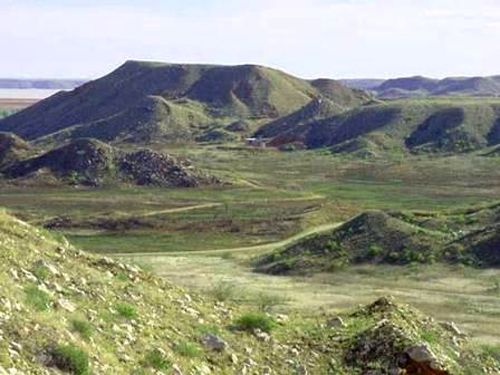 Texas‘ only National Monument, the Alibates Flint Quarries, commemorate and preserve the archeological traces of prehistoric Indian homes, workshops, quarries, and campsites along the Canadian River in the Texas Panhandle. While traces of these ancient peoples’ existence can be found throughout the region, few sites are as dramatic as Alibates Flint Quarries.

People have used Alibates flint throughout 13,000 years of North American history. Although termed “flint,” the stone is technically an agatized dolomite unique to the Texas Panhandle, specifically, a 10-square-mile area around the monument. Most of the flint, which displays startling beauty in hues and tones of the evening sky, with colors ranging from pale gray and white, to pink, maroon, and vivid red, to orange-gold and an intense purplish blue, is most concentrated on about 60 acres atop a mesa in the heart of the 1,000-acre monument.

Until around 1870, Alibates flint was used for projectile points, scrapers, knives, and other stone tools. In the late 1800s, the flint began to be occasionally used for gunflints. 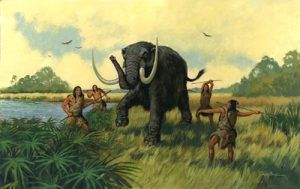 The Clovis Mammoth Hunters are the earliest known group of people to have used Alibates flint. These ancient people were big-game hunters living near the end of the Ice Age, around 9500 BC to 9000 BC, who shared the Llano Estacado with Ice Age animals.

Around 6000 BC, at the beginning of the Archaic period, the climate became drier, and Ice Age mammals had become extinct. The straight-horned bison was no longer alive, and the American bison didn’t return until later in the Archaic period. The local American Indians turned to various smaller game, such as deer and antelope, and gathered more plant foods. Alibates flint was still used for making a wide variety of stone tools. Spears and atlatls were still used; the bow and arrow would not be invented until about 700 AD. 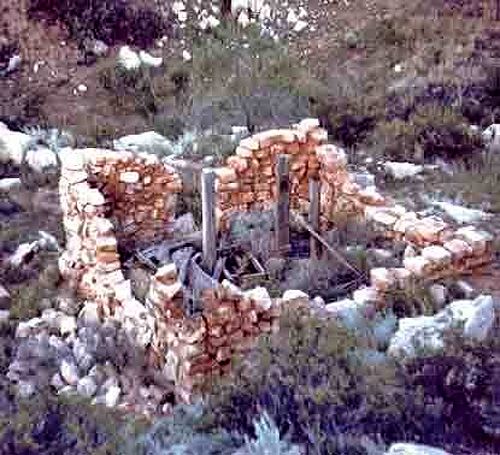 These Plains Village Indians, Caddo, Pawnee, and Wichita ancestors, lived here in large permanent villages and smaller, outlying farming and gathering communities. Villages were built of rock-slab houses from one to 100 rooms. Most were single-unit dwellings, although some rooms were connected. The architecture of this period featured rectangular or semi-circular rooms with long, low crawlway entrances, which probably afforded some protection from animals and hostile people and may also have allowed more airflow through the structure. The walls of their residences were built with one or two rows of dolomite along the base. When two rows of dolomite were used, rubble was placed between the two rows, probably for insulation. Wattle and daub or stone were used for the higher sections of the wall. The roof was probably made of thatched grasses. Two low benches along each side of the interior were probably used for sleeping areas. A fire pit was located in the center of the room, which would have required a hole in the ceiling to let the smoke out. Shards of Alibates flint are found on the ground around the Antelope Creek village near the quarries.

Bison bone tools were used to dig down four to six feet below the surface to reach the Alibates flint. The flint was pried out of the dolomite layer and shaped into a two-sided piece of flint that could be carried, called a biface or quarry blank. The quarry blanks were then carried over to the village, approximately a mile away. Much of the flint was traded with other tribes, and tools made from Alibates Flint have been found in many places across the Great Plains and Southwest.

The Antelope Creek people are one of two Plains Village cultures to use masonry in their homes; early archaeologists thought that the Antelope Creek people had come from the New Mexican Pueblo Indians, but it is now believed that they came from Eastern Woodland tribes. They left the Texas Panhandle abruptly around 1450 AD, perhaps forced to leave by drought conditions, disease, or hostile Apache. They may have gone east and joined other Caddoan-speaking tribes, such as the Pawnee or Wichita.

More than 700 quarries exist where this flint was dug out by hand. Today’s quarries are usually round ovals about six or more feet in diameter with depressions in the center. Wind and rain have filled the once four to eight-foot deep holes with soil.

Alibates Flint Quarries National Monument has a modern visitor contact station with exhibits, flint samples, a bookstore, and a theater to watch a 10-minute orientation film. Outside, visitors may visit the Alibates Interpretive Garden or take a 10-minute self-guided hike in the Mesquite Trail, which winds around a small mesa adjacent to the garden. Visiting the flint quarries is by ranger-guided tour only, which are typically offered daily, depending on weather and staff availability. It is recommended that those wishing to take a ranger-led tour call in advance to confirm tour times, availability and make reservations. The tour involves a one-mile round-trip hike up a moderately steep trail covered with loose gravel and includes stairs. It has an elevation gain of 170 feet which is the equivalent of climbing 17 flights of stairs with frequent stops and takes about two hours. Tour members should bring water and wear comfortable, sturdy walking shoes with closed toes. It is not recommended to visitors with heart problems, artificial knees/hips, and breathing problems. 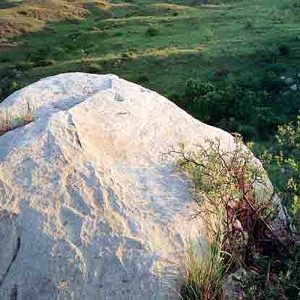