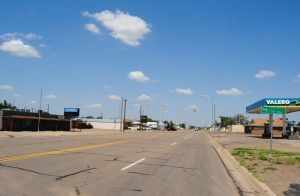 Fritch, Texas, a small town located in southwestern Hutchinson County and partly in Moore County, got its start as a railroad town in 1927. Located on State Highway 136, Fritch is located about 12 miles west of Borger. The typically flat High Plains are broken up into canyons and draws by the Canadian River.

The town got its start in 1924 when the Chicago, Rock Island & Pacific Railroad arranged to purchase a right-of-way through land owned by three ranchers — James M. Sanford, J. H. Johnson, and Roy B. Wright. However, two more years would pass before the railroad began working on the spur line between Amarillo, Texas, and Liberal, Kansas.

By July 1, 1927, the tracks had reached what would become the town of Fritch. The railroad named the depot in honor of H.C. “Fred” Fritch, a vice-president of the railroad line. A post office was established the following year, on March 10, 1928, with John W. Hardin as the first postmaster, but it would be several years before the town would be officially established. One of the earliest residents was Anna Schowe Wilson, the first teacher in the Sanford-Fritch School District. She taught at the Johnson Ranch camp near Antelope Creek, between Sanford and Fritch. When she moved her family to Fritch in 1929, the town was made up of only tar paper shacks and tents, and there was no water or electricity in the settlement. Water was hauled into town in barrels from nearby ranches and was sold for 25¢ a barrel. In 1930, an early resident described Fritch as having just about seven families — Newport, House, Law McGee, Alexander, Perry Marsh, and Anna Schowe Wilson. At that time, Mrs. McGee taught school to 8 students in a room of the home of Mr. House. His home also had one room that served as a small grocery store. 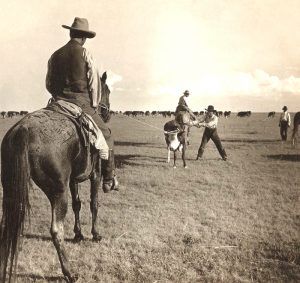 Cowboys at work on the Palo Duro Ranch near Fritch, Texas, in about 1900.

In 1934, Joe E. Lee, who had been made the postmaster a few years earlier, made “news” in the tiny town of Fritch and the entire Texas Panhandle when he made a “special delivery” to himself. For several years, the Texoma Natural Gas Co., headquartered in Chicago, Illinois, sent its payroll in cash to Fritch every two weeks. One week, the temptation was seemingly just too much, and Joe Lee made off with the payroll. But, he was arrested the very next day in Amarillo and, after being found guilty, was sent back to Kansas — to the federal prison at Leavenworth.

When the Panhandle Eastern and the Texhoma Natural Gas Plants were being built, several new people came to the area. In about 1931, Paul Compton and his wife rented an old building from Mr. H.P. Newport to operate a cafe. They fed 25-30 men each day for 50 cents a meal, working from 4:30 a.m. to 10:30 p.m. Mr. Newport ate all his meals at the cafe in exchange for the rent. Because many of the men working to build the plants had no place to sleep, the Comptons bought a big tent and filled it with cots for the men to sleep. The post office was in one corner of the cafe, and Paul Compton served as postmaster for a few months in 1931. A short time later, a man named Joe E. Lee, who had recently moved from Kansas with his wife Cleo, took over the position in June 1931. Fred Fritch, who was instrumental in opening the area to settlement, laid out the streets of Fritch parallel with the railroad in 1933. Another early promoter of Fritch was H.P. Newport, who had previously been successful in developing Ponca City, Oklahoma. 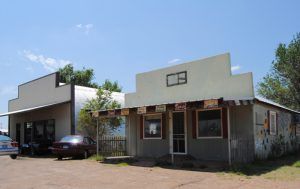 His wife Cleo, who was found to have had nothing to do with her husband’s mail theft, was then appointed postmistress to replace her husband. Cleo would make a name for herself in Fritch and leave behind a colorful legacy. She was extremely cranky, quick to “go postal” on anyone who complained, and a constant cigar smoker; she ran the post office with a heavy hand. Despite her attitude; however, she ran the post office for 21 years, from 1934 to her death in 1955.

Though five major gas companies located in the vicinity in the wake of the oil boom, the growth of Fritch was slow during its first several decades. In 1940 it had a store, a post office, and an estimated population of just 75 people. However, the construction of Sanford Dam on the Canadian River prompted Fritch to incorporate in 1959. By the time of the dam’s completion in 1965, the city reached its peak population of 2,800 and boasted two schools, six churches, a bank, and numerous businesses. 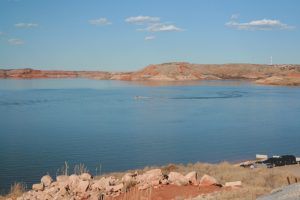 In the late 1960s, growth waned due to lagging oil and gas production, and the town’s population dropped to 1,778 in 1970. Two years later, the Rock Island Railroad abandoned its line through Fritch. However, the energy crisis of the early 1970s fostered increased oil and gas activities, and Fritch began to grow again.

By 1980 Fritch had 31 businesses and a population of 2,299. Ten years later, it reached its peak population of 2,335. Afterward, the town faced both administration problems and natural disasters. A tornado in 1992 and a fire in 2014 were responsible for destroying several homes. Nearby Lake Meredith, along with the rest of the Texas Panhandle, was also going through a severe drought, lowering the lake levels to 27.03 feet or just or 1.3% capacity, and the Harbor Marina and docks were closed and removed. However, with more recent rainfall, the lake is rebounding.

Today, Fritch is called home to about 2,000 people. Though it is primarily a bedroom community with most citizens commuting to nearby Borger and Amarillo for work, it still has a couple of significant employers in the area, including Pantex, ConocoPhillips, and Agrium. The National Park Service headquarters for Lake Meredith National Recreation Area is located in Fritch, and the Alibates Flint Quarries National Monument, on the southeastern shore of Lake Meredith, is near Fritch in Potter County. 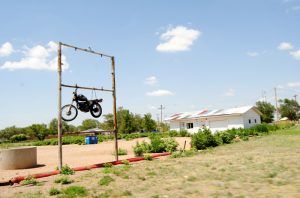 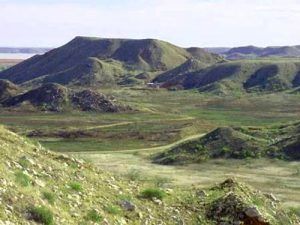