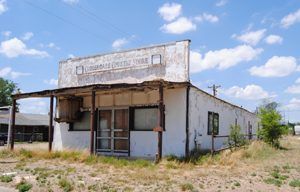 The Crossroads Store in Sanford is no more. Kathy Weiser-Alexander.

The town was named for James M. Sanford, on whose ranchland it was established. It was soon populated with oil boomers and oil company employees. During its first year, the Acme Lumber Yard was built on one end of Main Street, and at the other end stood a two-story brick hotel owned by Phil Hall. Moon Mullins established a cafe, and the post office opened on August 23, 1927, with Jas. B Michener as the first postmaster. On June 15, 1927, the Hutchinson County Board of Trustees created the Sanford School District, which would develop into a complete 11-grade system, continuing to operate until 1935.

As many of the first oil boomers moved on to other areas, the first businesses established in the community, including the lumber yard, hotel, and cafe, failed. However, Sanford continued to become a stable petroleum town, and new businesses were established.  In 1933 the Natural Gas Pipeline Company built the largest compressor station beside the railroad tracks seven miles southwest of Sanford. With further development of the Panhandle oil and gas field, three carbon black plants and two gasoline refineries near Sanford also came. In 1936, Sanford high school students were sent to Borger and Phillips shortly after that. 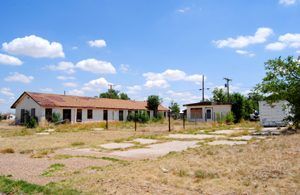 This old motel in Sanford, Texas, appears to have been closed for many years. Kathy Weiser-Alexander.

In 1935, Clyde and Duane Page opened a grocery store in Sanford, and in 1938, Clyde became the postmaster, a position he held until 1945 when he moved his family to Dumas. John T. and Wilma Fisher owned and operated Fisher’s Service Station from 1938 until 1952. The station was located at the east end of Sanford and was a popular gathering place for the locals. In 1940 Sanford had five businesses and a population of sixty.

The carbon black plants were phased out by 1953, and in 1961, the Sanford school district merged with that of Fritch. A short time later; however, the Sanford Dam and Lake Meredith were created, bringing growth to Sanford. By 1980, the town had several small businesses, many catering to lake visitors, and about 250 people.

Unfortunately, the drought of the last several decades caused Lake Meredith’s water levels to fall to all-time lows and resulted in the closing of most of Sanford’s businesses. Its area population today is just about 150. 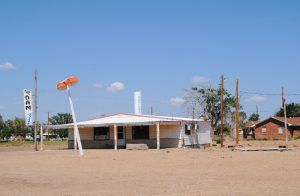 The Dam Store in Sanford is closed by Kathy Weiser-Alexander.