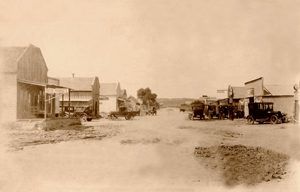 Plemons, Texas during the time it was the Hutchinson County Seat. There is nothing left of Plemons today, but a small cemetery.

Plemons – Once the county seat of Hutchinson County, Texas, there is nothing left of the old town today, but a small cemetery. The site got its start when a man named Barney Plemons, the son of Amarillo judge and state legislator William Buford Plemons, filed on 80 acres on either side of a bend in the Canadian River in about 1893. At that time, crossing the Canadian River could be dangerous, sometimes, even fatal, as the river was surrounded by invisible quicksand bogs that could swallow up a man, a horse or even a wagon in a matter of minutes. In the meantime, Barney Plemons had discovered that his horse had an uncanny ability of recognizing the quicksand traps and was able to find its way around them. Seeing a great opportunity, Plemons started a business guiding people across the river and the site became known as Plemons Crossing. 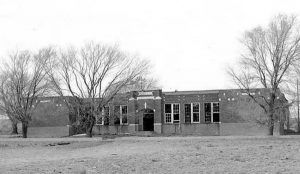 With the Canadian River as a barrier to the northern rangelands and Plemons Crossing, one of the only safe places to make the traverse the river, Barney Plemons’ business was very successful. Before long, other people moved into the area and a few businesses sprang up, including a blacksmith, general store, harness shop, livery stable, and a boarding house. About 50 people lived in the vicinity when Hutchinson County was established in 1901. One of these was a rancher named James A. Whittenburg, who built his dugout home on a hill overlooking Plemons Crossing in 1898. Whittenburg would later be instrumental in developing other sites in the county.

At that time, Plemons Crossing was the only “town” in Hutchinson County and became the county seat. When it gained a post office on May 29, 1901, the name was shortened to simply Plemons. Mattie Sams served as the first postmaster. A school was also established with family names of Churchill, Hedgecoke, Whittenburg, Christain, Pitts, Owenby, Bryan, Sessions, and many others appearing on the teacher registers.

The first courthouse was temporarily held in a box-car structure until a two-story frame courthouse was built by E.E. Ackers. His wife was the first to be interred in the Plemons Cemetery in 1902. Plemons experienced slow growth as a river-crossing town for area ranches, including the Turkey Track and Tar Box outfits. Between 1902 and 1905, a wagon yard, a barbershop, a doctor’s office, a drugstore, and a mercantile store were established. Initially, at least 15 families made Plemons their home. William “Billy” Dixon, former buffalo hunter scout, and Hutchinson County’s first sheriff moved his growing family to Plemons and for three years operated a boarding house there. Despite the fact that his three oldest children went to school in Plemons, Dixon claimed that he “found living in town worse than it could have been in jail.”

Although a permanent church building was never constructed, a parsonage was built, and services were held either in the school or the courthouse. Plemons declined when the Amarillo branch line of the Chicago, Rock Island and Gulf Railway bypassed it. A special election in the fall of 1926 made the new town of Stinnett, ten miles to the northwest and on the railroad, the county seat. Having lost the election and knowing how it would affect the town, Plemons residents threatened a court suit. The newly elected county commissioners responded by holding a midnight meeting and then backing a truck up to the Plemons courthouse, loading up all the county records, and driving off to Stinnett in the middle of the night.

Though losing the county seat was a blow to Plemons, the town continued to survive for the next two decades hoping to profit from the Panhandle oil boom. One of the biggest events in the town’s history occurred on March 18, 1932, when W. J. “Shine” Popejoy, known as the “King of the Texas Bootleggers” and a notorious member of the Borger criminal element, held up the Plemons town bank. 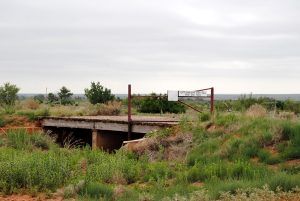 By the early 1940s, the town was comprised of only a handful of houses, the post office, the school, and the cemetery. It wasn’t long before the remaining residents moved to neighboring communities and the town began to fall into oblivion. The post office was closed in June 1952. Plemons’ remaining buildings stood for years; however, when a new owner purchased the property, everything was razed including the substantial two-story brick school building. The old townsite is on private property and all that’s left of Plemons today is the cemetery, and it can’t be entered without making a phone call first. The last burial in the Plemons cemetery was that of Charles Ray Sesions in 1953.

Prairie Johnson Camp – A small Phillips Petroleum Company camp that is now a part of Borger.

Pringle – Located nine miles north of Stinnett in northern Hutchinson County, Pringle got its start in 1929 when the Chicago, Rock Island and Gulf Railroad built its line between Stinnett and Hitchland. A post office opened on September 13, 1929, with Benjamin F. Cook serving as the first postmaster. A school was organized the same year on land donated from William Pringle, for whom the community is named.  By 1933 Pringle had three businesses and a population of 20 people. The post office closed about 1947, and the school was consolidated with the Morse schools in 1977. The area population at that time was about 60 but dropped to just about 46 people by 1968. Since that time, the area population has been estimated at about 40 people, though it appears that only one family remains in the “town” of Pringle. Today, there are but a few remnants of the former town – a couple of falling wood buildings, an abandoned home, the shell of the burned out Elementary School, a field of debris and rusting trucks, and the grain elevator. The old townsite is located at the intersection of Farm Road 1598 and State Highway 136. 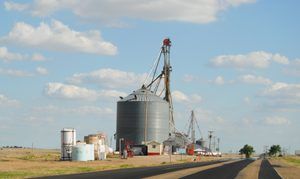 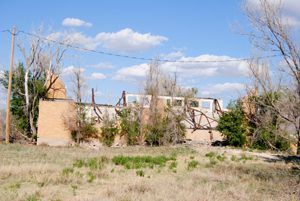 Riverview Camp – A small camp once located near the Borger power plant.

Salome – A postal stop that was established on January 16, 1908, with Benjamin Eiland as the postmaster. Lasting just a little more than a year, it closed on May 31, 1909, and the mail was then sent to Plemons.