During the Civil War, Texas cattle were no longer allowed to be shipped northward, effectively cutting off the income and much of the economy of the Confederate state of Texas. When the war was finally over, this policy had led to a large abundance of Texas cattle — some five million head — roaming the ranches of the Lone Star State. With no railroads to ship them to market, the cattle were worth only $3 to $4 a head. In the meantime, there was a pent-up demand for beef in the northern and eastern states where the going rate was 10 times that amount.

Realizing the immense profits to be made, Texas cattlemen began searching for the nearest railheads. However, this would not be as easy as it might seem. For several years, Missouri and Kansas farmers feared the Texas Longhorns coming through or entering their states due to a cattle disease called “Texas Fever”. The longhorn cattle appeared to be perfectly healthy, but Midwestern cattle allowed to mix with them or to use a pasture recently vacated by the longhorns sometimes became ill and often died. It was determined that ticks were spreading the disease to the local cattle but the longhorns were immune to it.

In the spring of 1866 drovers were wrangling an estimated 200,000 to 260,000 longhorns northward along the Shawnee Trail from Texas. While many were turned back or severely delayed due to Texas Fever, some drovers diverted their herds around the hostile settlements getting their cattle to market and making large profits. 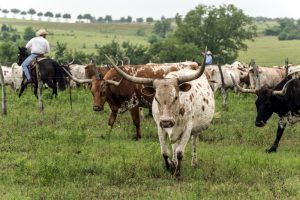 But the days of cattle blazing the Shawnee Trail were virtually over. In the first half of 1867 six states enacted laws against trailing and Texas cattlemen knew that something else would have to be done. At about this time, a young livestock dealer named Joseph G. McCoy conceived the idea of establishing a shipping depot for cattle at some point in the west and knew that the railroad companies were interested in expanding their freight operations. He soon selected Abilene, Kansas, and opened the Abilene Trail through Indian Territory (Oklahoma)  from Texas. Thus began the era of the long cattle drive and Kansas cowtowns.

Meeting the demands of the many cowboys coming off the Chisholm Trail, dance halls and saloons, which almost always featured gambling, were fixtures in these Kansas cowtowns. Brothels and prostitution were another business that excelled with the high percentage of men arriving and very few women to accommodate them. The towns grew quickly, often levying taxes on the vices provided to the cowboys – liquor, gambling, and prostitution. They also quickly grew reputations that were described as “wicked, decadent, evil, and lawless.”

Between the years of 1865 and 1885, hundreds of thousands of Texas Longhorns were driven to these shipping points. However, by the mid-1880s, a number of events ended the cattle drive era in Kansas. Most prominently was the arrival of the railroad into Texas, but also factoring in, were quarantine laws and homesteaders that closed of much of the open range. But the cattle business in Kansas did not end. By 1890, the state ranked third in the nation in cattle production. As to the cowtowns themselves, most moved into a quieter existence becoming peaceable agricultural communities.

It was here in these cow towns that many famous Old West characters gained or bolstered their reputations, men such as Wyatt Earp, Bat Masterson, Wild Bill Hickok, John Wesley Hardin, and dozens of others. In these wild frontier towns also occurred some of the most famous gunfights of the American West including the Dalton Gang Shoot-Out in Coffeyville, the Hide Park Gunfight in Newton, and Long Branch Saloon Shootout in Dodge City.