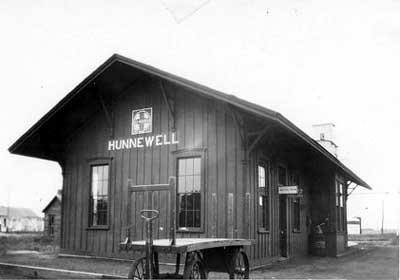 In the 1880s, Hunnewell, Kansas flourished as a busy shipping point for Texas cattle and, like other Kansas Cowtowns, had a bawdy reputation for a time.

In 1880, the Sumner County Railway Company was chartered and built from the “Southern Kansas Railway” southward from Wellington through Rome, South Haven, and Hunnewell. The line was completed to Hunnewell on June 16, 1880. Later, it extended to points further south in Indian Territory (Oklahoma). The town was named for Boston financier and railway owner H. H. Hunnewell. The Sumner County Railway Company would later become part of the Leavenworth, Lawrence & Galveston Railroad that provided quick access to the Kansas City stockyards.

Four hundred acres of land for the townsite, initially owned by Robeson, Stewart, and Hale, was purchased by the railroad company, and a town company was formed. Various cattle and railwaymen took stock in this company, and a town was laid out. The first building erected was an outfitting store called Ford & Leonard, which opened on June 16, 1880, the day the railway reached this point, and a railroad station was completed the same month. 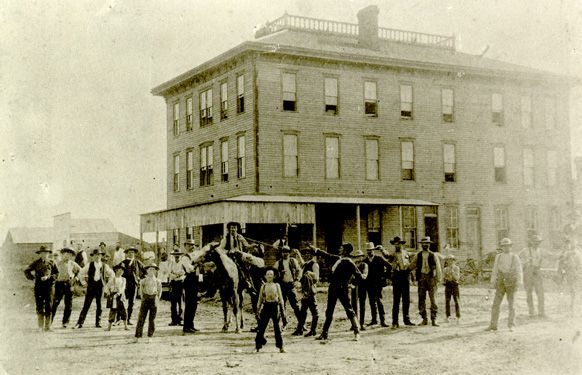 Within a few days, a host of other buildings sprung up, and a stockyard was built. Over the following months, the town grew quickly. Hooker & Phelps put up the first drug store, Roland & O’Neil the first hardware store, and J.S. Danford established a bank. Dr. Dobbins was the first physician, and P. M. Judd the first attorney. The first and only hotel was the Hunnewell House, completed on August 20, 1880, at $5,000. This house had 33 rooms and was one of the best in the county. Later the hotel was known as the Sante Fe Hotel and the Hale Hotel.

For a few months, the town was without regular mail service, and mail for this point was brought to South Haven and from there by a boy to Hunnewell. Later, it was brought to the depot and left on the desk, where everybody picked out his letters. On August 12, 1880, a post office was established, and Frank Schiffdaner was made the first Postmaster. The post office was contained within various stores and a bank building throughout the following years.

School District No. 156 was organized in Hunnewell in September 1880, and a 26×40 foot building was built in 1881-82. Though two church organizations were founded, including the Presbyterian and the Methodist, no church was ever built. 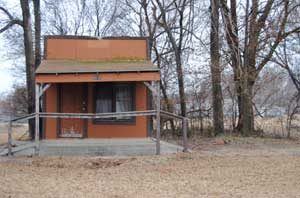 Before the organization of the city, a policeman, judge, and two marshals were hired by the railway company and the citizens. However, the city was officially organized in April 1881, and officers were elected.

Hunnewell’s first bank had failed by November 1881 but, on February 1, 1882, P. B. Bowers started a private bank in the Danford building and, on May 1, moved into a new stone bank building, which he had erected at the cost of $1,200. He transacted business until January 15, 1883, when he sold to John H. Hamilton & Co. The Hamilton Bank would operate for several years.

Typical of cowtowns, the business district of Hunnewell reportedly consisted of one hotel, two stores, a barbershop, a couple of dance halls, and eight or nine saloons. Also typical was that violence was not uncommon and was the site of the Hunnewell Gunfight in 1884. This event occurred after two cowboys named Oscar Halsell and Clem Barfoot raised cane in Hanley’s Saloon on October 5, 1884. When two lawmen entered the saloon and tried to quiet the disturbance, all hell broke loose with guns blazing. Several shots followed, resulting in Barfoot being killed and Deputy Sheriff Ed Scotten mortally wounded. No one was ever prosecuted, and although publicized at the time, the gunfight was soon forgotten. Oscar Halsell would become a prosperous rancher, later employing such notable outlaws as Bill Doolin and George “Bittercreek” Newcomb. Halsell was also close friends with later U.S. Marshal Evett D. Nix. 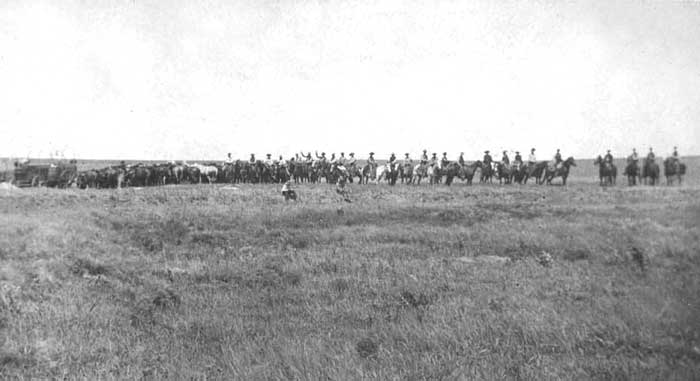 In 1885 George W. Miller of the famous 101 Ranch in Oklahoma bought 93 acres from the Hunnewell Town Company that he used for shelters, feed storage, and cattle pens. Miller shipped green horses into Hunnewell and kept a breaking crew working year-round.

When the Cherokee Outlet was opened in September 1893, a registration booth was set up in Hunnewell. Every incoming train added hundreds to the thong of approximately 15,000 people gathered to make the run. Several gambling houses and five or six saloons flourished during these days. Most prospective settlers brought their food, but a barrel of ice water cost $25 to $30. On September 16, horses and vehicles, three and four deep, were amassed along the starting line. 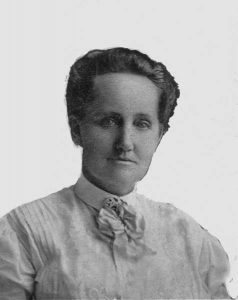 By 1900, Hunnewell reached its peak population of 233. Afterward, the population began to dwindle as more railroad lines made their way to Oklahoma and Texas, and the cattle trade in Sumner County declined. By 1910, the railroad was part of the Atchison, Topeka & Santa Fe. The town still supported several retail stores, a mill, an elevator, a bank, telegraph and express offices, and a money order post office with two rural routes.

In 1911, small town Hunnewell made national news when it elected a woman as mayor. Though Ella Wilson didn’t run for office, her name was written in by enough residents that she won the role. Quickly, she justified her residents’ confidence with her vigor and independence. First, Mrs. Wilson startled the community by appointing another woman, Mrs. Rosie E. Osbourne, city marshal, with instructions to preserve order, clean house, and enforce the laws restricting the sale of liquor. Mrs. Osbourne was six feet tall, weighed nearly 250 pounds, and was said to fear neither man nor mouse. Wilson also appointed Mrs. E. F. Hilton as town clerk. However, Mrs. Wilson also found herself immediately locked into a battle with a stubborn all-male city council, which stubbornly opposed her every move. The mayor would set meetings, and the council would refuse to show up, but Wilson was very popular with a significant element upon whose moral and political support.

“Hunnewell is no worse than a lot of other towns-— but it is going to be better than most of them.” — Ella Wilson 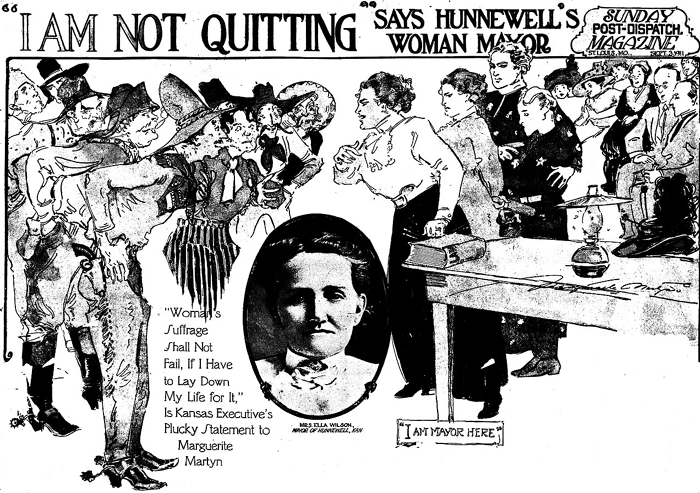 Finally, a complaint was made to the Kansas Governor, and the Attorney General notified the six members of the council that they must co-operate with Mrs. Ella Wilson and that no more trifling would be tolerated.

“I notified the councilmen that the joke had gone far enough. The councilmen may be compelled to attend the official meetings and transact the city’s business through a writ of mandamus. They may be ousted from office for failure to perform their duties, or they may be tried for dereliction in office which would subject them to a fine of $1,000 and a year in Jail each.” — Kansas Attorney General John Dawson 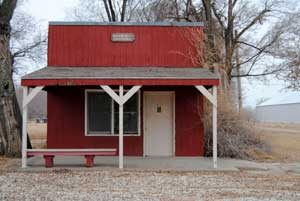 Since the council members would have bourne the legal costs if they lost, three resigned immediately, leaving a council without enough members to override Wilson’s vetoes. Afterward, she was able to run the city effectively but did not aspire to a second term.

Mrs. Wilson owned a home in Hunnewell and several farms in Oklahoma and Kansas. As her husband was an invalid, she had long been accustomed to managing her own affairs unassisted. She also cared for two sons — one twenty, the other fourteen years old.

The Hunnewell House hotel was razed in 1919, at which time, over 70 pounds of lead was recovered from the white pine boards offering substantial proof that many gunfights and shooting sprees took place inside and outside the establishment.

Hunnewell’s post office remained in operation until it was discontinued on March 31, 1960.

Today, the town boasts a population of just about 65 people, a scattering of homes, and two grain elevators. The railroad still runs on the south side of the town. It is located three miles south of South Haven, Kansas, on U.S. Highway 177. 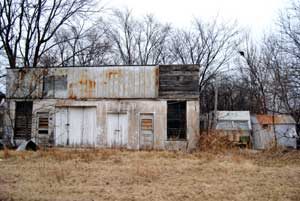 An old business building in Hunnewell, Kansas by Kathy Alexander.