In the late 19th century, the Chisholm Trail became the main route of driving cattle northward from Texas to the railheads in Kansas. The trail was first marked by Jesse Chisholm in 1864 when he blazed the path for his wagons hauling supplies to his trading posts — one southwest of present-day Oklahoma City and the other in Wichita, Kansas. Trading with the U.S. Army and the Indians, the trail stretched from southern Texas across the Red River to Abilene, Kansas.

Though Chisholm never drove cattle on the trail named for him, the Texas cattlemen discovered it when looking for a way to drive their cattle northward to the railhead of the Kansas Pacific Railroad, where they were shipped eastward. After the Civil War, cattle were nearly worthless in Texas due to an overabundance but were in high demand in the North and the East. Determined to find a way to sell these cattle, many cattlemen sought ways to supply the demand for beef and recover from the depression that the war had left behind in the Lone Star State. One enterprising man named Joseph G. McCoy, a cattle buyer from Illinois, persuaded the Kansas Pacific Railroad officials to lay track to Abilene, Kansas, in 1867.

He then began building pens and loading facilities and told Texas cowmen that a “new” cattle market was available. That year, some 35,000 head of cattle were moved northward along the Chisholm Trail to Abilene, and McCoy’s stockyard became the largest west of Kansas City. The number doubled yearly until 1871 when 600,000 head glutted the market. Over the years, an estimated five million head of Texas cattle reached Kansas over the Chisholm Trail.

The first herd to follow Jesse Chisholm’s wagon trail to Abilene was O. W. Wheeler and his partners, who in 1867 bought 2,400 steers in San Antonio. They saw wagon tracks at the North Canadian River in Indian Territory and followed them. Others continued on the path referred to simply as the “Trail.” Later it was also called the Kansas Trail, the Abilene Cattle Trail, or McCoy’s Trail. Though Chisholm’s path was only north of the Red River, the Texas cowboy soon gave Jesse’s name to the entire trail from the Rio Grande to central Kansas.

The long trips up the trail from Texas were hazardous for both the cattle and the cowboys. The trip took two to three months as the drives crossed major rivers, including the Arkansas and Red Rivers, and traveled through canyons and low mountain ranges. In addition, the drovers also had to be concerned about Indian attacks, outlaw cattle rustlers, and cattle stampedes.

As the railroad expanded in Kansas, the trail changed several times, and by the early 1870s, the cattle business in Abilene had diminished. In its place, new cattle markets at Ellsworth and Newton were established. The Chisholm Trail moved south to Newton in 1871, and the city became one of the most notorious and violent cattle towns that ever existed. A year later, Wichita acquired the railroad and the cattle business, which it retained until 1876. By 1880, the cattle only had to be driven to Caldwell, which competed with another famous cow town – Dodge City.

Once the Plains tribes had been subdued, and the buffalo were gone, ranches began to spring up everywhere along the trail. By 1884, much of the old trail had been closed off by barbed wire and was open only as far as Caldwell, Kansas. 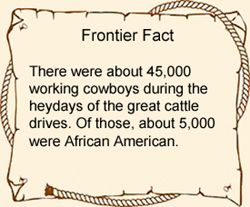 During its heyday, between 1867 and 1884, some five million cattle and an equal number of mustangs were moved along the trail – the most significant livestock migration in history.

By 1887, the Missouri, Kansas & Texas Railway had arrived in the Lone Star State, and the long cattle drives to Kansas were no longer needed.

The Chisholm Trail generally went north from Austin through Waco and Fort Worth before crossing the Red River near Preston, central Oklahoma, and Kansas.