Fort Dodge, Kansas, was one of the most important forts on the western frontier. It is located to the southeast of the Caches, a noted landmark on the Santa Fe Trail, and present-day Dodge City. On April 10, 1865, the fort was established by Captain Henry Pierce, by order of Major General Grenville M. Dodge. The fort’s primary purpose was to protect the wagon trains along the Santa Fe Trail to New Mexico. 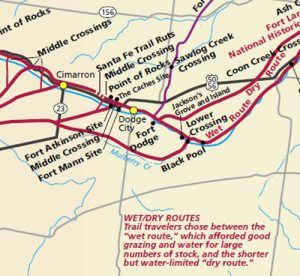 The need for a fort at this location was great, as the site was home to an unusually large campsite situated where the dry route and the wet route of the Santa Fe Trail intersected. The dry route came across the divide from Larned on the Pawnee River, while the wet route followed the river.

The dry route, often called the Jornado de Muerto, the journey of death, was often without water for the whole distance, and wagon trains would lay up to recoup after making the passage. When the Indians discovered this popular stopping-off point, they began to attack the many unwary emigrants and freighters traveling through the area.

Initial fortifications were crude earth dugouts excavated along the north bank of the Arkansas River. Many men first stationed there were Confederate soldiers who preferred a fight with the Indians to languishing, perhaps dying, in northern prisons. The soldiers had no lumber or hardware, so they had to use the available materials, grass, and earth, to create the 70 sod dugouts. These were 10 X 12 feet in circumference and seven feet deep. A door to the south faced the river, and a hole in the roof admitted air and light. Banks of earth were bunks for the soddies that slept from two to four men. Sanitation was poor, and spring rains flooded the dugouts. Pneumonia, dysentery, diarrhea, and malaria were common in the first year in the isolated fort.

In 1867 Fort Dodge was relocated and rebuilt in stone buildings. In 1868 Comanche and Kiowa Indians attacked Fort Dodge, killing four soldiers and wounding 17. As a result, General Philip H. Sheridan came to the fort in the summer of 1868. He pitched his camp on the hill north of the fort and started outfitting his command against the Indians.

In the fall of 1868, General Alfred Sully took command at the fort in preparation for a winter campaign against the Plains Indians. When the preparations for the expedition were well underway and his army practically ready to march, General Sully was sent home, and General George A. Custer carried on the campaign.

In its heyday, up to four companies of troops occupied the post, but, as the Indian threat was reduced, it was only occupied by about a dozen men in its later years. In December 1880, a portion of Fort Dodge’s reserved Lands were opened to homesteaders. However, most of those who settled were not homesteaders but Dodge City residents, including saloon keepers, gamblers, and “ladies of the night.”

Two years later, the fort was closed in June 1882, creating surprise among the Dodge City people, who were terrified of Indian raids. The last troops marched southward to Fort Supply, Oklahoma, when the flag was lowered on October 2, 1882. Fort Dodge, Guardian of the commercial frontier, the cattleman and homesteader, had fulfilled its purpose. A single custodian was assigned to keep watch over the property. During this period, several buildings were torn down or moved away, but many of the stone buildings remained. 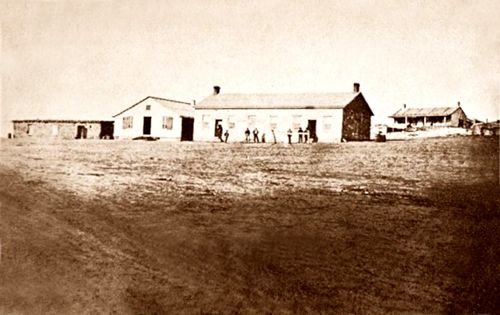 The military reservation was transferred to the Interior Department on January 12, 1885. The following year, more of the fort’s land was opened for settlement in May 1886, and about 100 claims were staked off. One of these claims was made by Dodge City entrepreneur Robert Wright, who managed to exploit the facilities by housing drovers who awaited the sale of their cattle. By purchasing land surrounding the Fort with money he earned selling whiskey and buffalo hides. 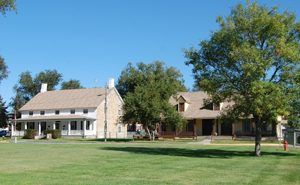 In the meantime, some Dodge City residents were working with government officials to utilize the still functional buildings for a retired soldiers’ home. After much work toward that goal, a federal law was enacted in 1889, authorizing the use of the post as a soldiers’ home by the State of Kansas. The Kansas Soldiers’ Home was opened in early 1890. When rebuilding and repairing began on the Soldiers’ Home, the character of the famous old post was sustained.

Old troopers began arriving. Most of them were Civil War veterans, but others were veterans of the Mexican-American War and Indian Wars. Eventually, dependents and relatives of Kansas veterans were admitted along with Confederate and African-American veterans. It would eventually also house veterans of the Spanish-American, Philippines, Boxer Rebellion, World War I, and II, Korean, and Vietnam Wars. 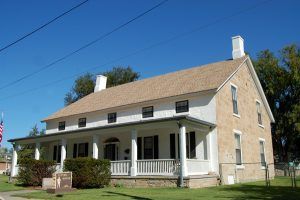