Cattle Ranch in the Old West by the Detroit Publishing Co., 1912.

During a period of about 15 years, beginning in 1868, the history of the range-cattle industry was made lurid in places by the notorious “wild and woolly cowtowns.” These came into existence, one after another, each flourishing for few years, on the lines of several of the pioneer western railroads as these iron trails advanced farther and farther into the range country; the worst being those that were made shipping points for the great trail-herds coming from the South. 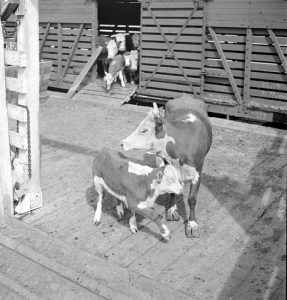 Without railroads such towns were impossible. Some of them became capitals of disorder, vice, lawlessness, and crime that were not surpassed in evil by the worst of the mining-camps ever developed in the Rocky Mountains. Each of them, when at the zenith of its renown for wickedness, was much like all of the others. While these towns primarily were appendages of the pioneer railroads, they were engrafted upon the cattle business of the West, and therefore their swift careers became part of the history of the industry. They afforded havens for many of the desperadoes, professional “bad men,” and scoundrels, by whom the West was overrun for some years after the close of the Civil War.

Furthermore, the dissipated and reckless element in the ranks of the cowboys, that needed only the excitement of intoxication to make it dangerous, in the first half of the cowtown period stood at the highest it ever attained among them. These towns, even in the height of their notoriety, were small towns. Counting out the transient class, most of which would go to larger towns to “winter,” the worst of these cowtowns had a real population of only about 500. But during the “cattle season,” that opened late in the spring and continued far into the autumn, the influx of buyers, speculators, drovers, cowboys, street hawkers, desperadoes, and gamblers would raise the number of those present in and around the town more than ten-fold.

The State of Kansas was called home to many of these cowtowns due to her geographical location. Abilene was one of her first and excelled all others in wildness and woolliness. The town established itself as the standard by which every other was measured and found more or less wanting. By the time that town had gone to the half-way point in its career, the limit in variety and possibility in uproarious “frontier wickedness” appeared to be reached, and so it seemed that if more were wanted it could be had only in the form of greater quantity. Afterward, many cowboys would reminiscence about those days and the many towns that followed, often saying: “Yes, that was hard town; but it wasn’t as bad as Abilene.” 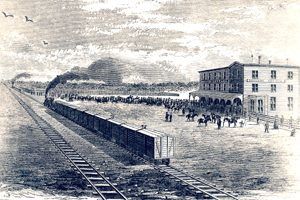 Abilene, Kansas in all it’s glory

Abilene, as a market and railroad shipping point for cattle, was the conception of Joseph G. McCoy, who was one of three brothers who were extensive buyers and shippers of cattle in Springfield, Illinois. His brothers were interested with him in the undertaking financially, but Joseph became their general manager on the ground. At the time, McCoy set his enterprise on foot, the Union Pacific Railroad had been completed through Nebraska, and the Kansas Pacific Railroad, the first one to advance into Kansas, had pushed the western end of its track into the northern-central part of that State. But from Kansas southward clear to the gulf there were no railways excepting few local lines in the eastern part of the Texas coast region; and the only practicable northern outlets for Texas cattle were the trails that led into southeastern Kansas and southwestern Missouri, where the Texas drovers had been having trouble with “hold-ups,” as well as with honest settlers who were afraid of having Texas fever introduced into their country. Of the circumstances and the very praiseworthy motives that induced him to extend a helping hand to the Texas trail-cattlemen, and to remedy some of the discouraging conditions under which they labored, and that also resulted in lifting Abilene from the deepest obscurity to lofty pinnacle of fame.

McCoy, writing in the third person, said in his Sketches of the Cattle Trade of the West and Southwest: 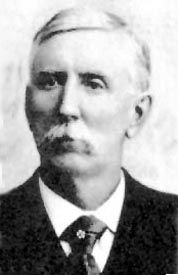 Joseph McCoy, after having prospected the western half of the completed part of the Kansas Pacific Railroad, selected Abilene as the place that was destined to become the renowned metropolis of wildness, wickedness, and woolliness, as well as an important cattle market, during a few fleeting years. The place was a mere hamlet on the railroad that had not yet risen to the importance of even a box-car station. McCoy built shipping-yards and other facilities for his business and put a good three-story hotel well on the way toward completion during the summer of 1867, and was ready for cattle early in September. The trade that year was limited to herds from Texas that were belated in reaching Kansas and that had been intercepted by “drummers” who had been sent South to apprise drovers of the existence of the new cattle market and shipping point. Some merchants and a greater number of less desirable folks joined fortunes with Abilene in that autumn, but the town remained fairly decent until the following spring.

Abilene having been extensively advertised throughout Texas during the winter of 1867-68, the promise of a large number of cattle, cattle drovers and their assistants, and cattle-buyers, coming to the place during the following summer and autumn, induced flocks of human birds of prey early to alight there and to put themselves in readiness to feed upon their expected victims. In most accounts of Abilene during the period of its lawlessness, the burden of its wickedness is thrown upon its cowboy visitors. While part of the disorder that made the town infamous, unquestionably was due to men from their ranks, as great, and probably greater, part, directly or indirectly was made by the horde of desperadoes, thieves, swindlers, confidence men, gamblers, bunco artists, courtesans, and other human dregs that helped in making the place pandemonium for about four years. Saloons, dance halls, gambling-holes, and dives of every other evil sort, in great plenty, appeared in 1868 and increased in number during each of the next three years. The character of the town was stamped by murder, lewdness, drunkenness, uproar, robbery, swindling, gambling, and all manner of lesser evils. The most noise was made by drink-crazed cowboys, who staggered about or rode up and down yelling, screaming, whooping, and firing their revolvers into the air or, at some human target that was passing by, but meanwhile, the horde of outlaws, swindlers, and outcasts was doing more actual harm.