“Tombstone, July 17.- John Ringgold, one of the best known men in southwestern Arizona, was found dead in Morse’s canyon, in the Chiricahua mountains last Friday. He evidently committed suicide. He was known in this section as “King of the Cowboys,” and was fearless in the extreme. He had many staunch friends and bitter enemies. The pistol. with one chamber emptied, was found in his clenched fist. He shot himself in the head, the bullet entering the right side, between the eye and ear, and coming out on top of the head. Some members of the family reside in San Jose, California.”

“A son of B.F. Smith, says the Tombstone Independent, found John Ringo’s horse on Tuesday last, about two miles from where deceased was found.

His saddle was still upon him with Ringo’s coat upon the back of it. In one of the coat pockets where three photographs and a card bearing the name of “Mrs. Jackson.” It seems strange that the horse should have wandered about all this time without having been discovered before. Mr. Smith brought the horse into town with him. It is a bay, weighing about 1,000 pounds.”

“My back was toward the Oriental Saloon. I heard a shot fired and turned. I saw Frank Leslie close to the sidewalk with a pistol in his hand. He fired and I ran towards him. Before I got to him he fired again. He was standing on the sidewalk when I came up to him. He said, “Jimmy, here is my pistol; be careful, it is cocked.’ He laid the hammer down and gave it to me. He said, ‘I will go with you.’ He said, ‘Jimmy, I could have done more, but could not have done less. I did not want to kill him. He was laying to kill me.’ I picked up a rifle that was lying on Claibourne’s knees across his thighs. I took Leslie as far as the police court-room.”

November 18, 1882,  Statement of Frank Leslie regarding the killing of Billy Claibourne 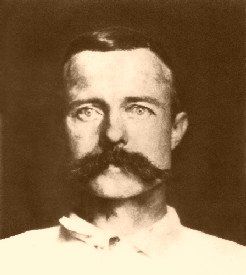 “I was talking with some friends in the Oriental Saloon when Claibourne pushed his way in among us and began using very insulting language. I took him to one side and said, “Billy, don’t interfere, those people are friends among themselves and are not talking about politics at all, and don’t want you about.” He appeared quite put out and used rather bad and certainly very nasty language towards me. I told him there was no use of his fighting with me, that there was no occasion for it, and leaving him I joined my friends. He came back again and began using exceedingly abusive language, when I took him by the collar of his coat and led him away, telling him not to get mad, that it was for his own good, that if he acted in that manner he was liable to get in trouble. He pushed away from me, using very hard language, and as he started away from me, shook a finger at me and said, “That’s all right Leslie, I’ll get even on you,” and went out of the saloon. In a short time a man came in and said there was a man waiting outside to shoot me, but I didn’t pay much attention to it. A few minutes later another man came in looking quite white and said Claibourne was waiting outside with a rifle.

I then went out, and as I stepped on the sidewalk, saw about a foot of rifle barrel protruding from the end of the fruit stand. I stepped out in the street and saw it was Claibourne, and said, “Billy, don’t shoot, I don’t want you to kill me, nor do I want to have to shoot you.” Almost before I finished he raised the gun and shot, and I returned the fire from my pistol, aiming at his breast. As soon as I shot I saw him double up and had my pistol cocked and aimed at him again, when I saw, or thought I saw, another man by him putting his arms around him, and lowered the pistol, and when it was discharged the bullet went in the sidewalk.

After I fired, I advanced upon him, but did not shoot, when he said, “Don’t shoot again, I am killed,” which I didn’t but watched him, with my pistol at full cock, as I didn’t know what game he might play to get me off guard. At that moment Officer Coyle came up and took hold of my pistol hand. I told him to be careful as it was at full cock. I then uncocked it and gave it to him , and said I would go with him. I told him I was sorry; that I might have done more, but I couldn’t do less. He then placed me under arrest.” 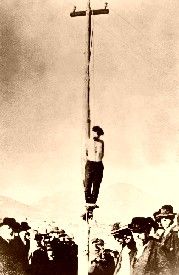 How An Arizona Mob Disposed Of One Of The Bisbee Murderers:  Tombstone, Arizona, Feb. 23. — At 9 o’clock on Thursday morning Judge Pinney sentenced John Heath to confinement in Yuma Penitentiary for life for complicity in the Bisbee murders. Twenty-four hours later the dead body of Heath dangled from the cross bar of a telegraph pole near the foot of Toughnut Street, where it was suspended by a rope. The following are the particulars of the occurrence as near as can be gathered: About 8:30 yesterday morning a crowd of men, mostly miners, numbering about 150, proceeded to the Courthouse.

Arriving there they detailed seven of their number from Bisbee, who entered and demanded that John Heath be turned over to them. The seven men approached the door leading to the corridor of the jail and one of them knocked. Being about time for the Chinaman who brings food for the prisoners to arrive, Jailer Ward opened the door unsuspiciously, and was immediately covered by weapons and told to give up the keys of the jail.

Seeing any attempt at resistance would be useless he did as requested, and in a few minutes the deputation was in the presence of the sought-for man. The crowd, which by this time had filled the spacious hall, started for the street. At the door they were met by Sheriff Ward, who called on them in the name of the law to desist. The Sheriff was picked up and gently removed down the steps out of the way, while the crowd started down the street on a run. The rope had been placed around Heath’s body, and about 20 men had hold of it. It never became taut during the run, the prisoner keeping up with the crowd, and showing no signs of the white feather.

Arriving at the place selected for the hanging one of the party climbed a telegraph pole and passed the rope over the cross-bar. Heath pulled a handkerchief from his pocket and, placing it on his knee, coolly and deliberately folded it, and, placing it over his eyes, asked someone in the crowd to tie it. This being done, he informed the crowd they were hanging an innocent man, and would find it out when the others (meaning Dowd and his companions) were hanged.

He told them he had faced death too often to be afraid, and had but one request to make, namely, that they would not shoot into his body. He was told his last wish would be respected and he told them he was ready. Countless hands grasped the rope. A run was made, and in a twinkling the man was suspended to the pole. The news spread about town rapidly, and in a few minutes an immense crowd of men, women, and children congregated on the scene. The universal expression was, “Served him right.” That this opinion should be so prevalent is no doubt the result of the testimony at the trial, which was convincing to any mind of ordinary intelligence, that Heath was a guilty accessory to the Bisbee murders.

The Coroner’s jury found as a verdict that Heath came to his death from “emphysema, which might have been caused by strangulation, self-inflicted or otherwise.” A placard was posted on the telegraph pole where Heath was found suspended and dead with the following inscription: “John Heath was hanged to this pole by citizens of Cochise County for participation in the Bisbee massacre as a proved accessory at 8:20 A.M., Feb 22, 1884 to advance Arizona.”

Compiled and edited by Kathy Weiser/Legends of America, updated September, 2017.

Note: These are not always exact quotes, as spelling errors and minor grammatical changes have been corrected

The Clanton Gang of Tombstone – The Cowboys

The Earps Role in Tombstone

John Heath and the Bisbee Massacre