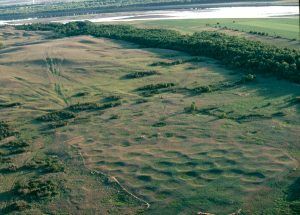 1600s – The Cheyenne, living in earth lodges, occupied the Cheyenne River valley; the Hidatsa moved west from Devils Lake to the Missouri River; the Sioux moved onto the plains from the woodlands of Minnesota.

1610 – Henry Hudson claimed the Hudson Bay watershed, which included much of eastern North Dakota for England.

1713 – England receives the northern part of North Dakota from France

1738 – Pierre Gaultier de la Vérendrye, a French explorer, visited Mandan villages near the Missouri River. This is the first known Euro-American expedition into what is now North Dakota.

1742 – The sons of La Verendrye returned to the Missouri River as part of an expedition in search of a western sea. Subsequent explorers to visit this region included Jonathan Carver (1768) and David Thompson (1797), among others.

1763 – Treaty of Paris granted to England part of the state drained by the Mouse and the Red Rivers.

1781 – The first known business enterprise, a fur trading post, was briefly established near the Souris River, but was soon abandoned as a result of pressure from unfriendly Indians.

1794 – Rene Jusseaume builds a fur-trading post near present-day Washburn along the Knife River.

1796 – John Evans from St. Louis ascended the Missouri River to the Mandan villages near the Knife River.

1797 – Alexander Henry Jr. starts a fur-trading post at Park River and moves it to Pembina in 1801. The post attracts the first white settlement in North Dakota.

David Thompson, an English explorer, mapped the northern part of the state.

1800 – Alexander Henry Jr. established a fur post at Park River. Henry moved his establishment to Pembina in 1801, and it became the nucleus for the first white settlement in what is now North Dakota.

By this date, fur traders from Canada were frequent visitors to this region and a trade route had been established between posts near Lake Winnipeg and the Missouri River Indian villages.

1801 – John Cameron built a trading post at the current site of Grand Forks.

1802 – On March 12, the first non-Indian child was born in what is now North Dakota to Pierre Bonza and his wife, Black slaves of Alexander Henry, Jr.

1803 – On November 20, Spain returned the Missouri River watershed to France.

The United States buys the western half of the Mississippi River basin from France in the Louisiana Purchase on December 30. 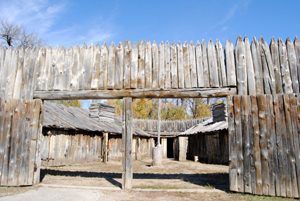 1804 – Meriwether Lewis and William Clark enter North Dakota and winter near the present town of Washburn.  Their post, Fort Mandan, is visited by Native Americans.

1806 – The Lewis and Clark Expedition passes through North Dakota on its way back to St. Louis.

1807 – On December 29, the first white child was born in present-day North Dakota to fur post employees at Pembina.

1811 – Scientific exploration of the Northern plains initiated by Lewis and Clark continued.

Botanists John Bradbury and Thomas Nuttel surveyed the region during their journey to Oregon.

Later expeditions included Prince Maximilian of Wied and artist George Catlin (1832-34) and naturalist John J. Audubon (1843) among many others.

1812 – An agricultural colony was established near Pembina by settlers from Canada under the authority of a royal grant to Lord Selkirk. The ill-fated attempt failed after internal feuding, boundary changes, and grasshoppers destroyed the crops in 1820.

Part of what is now North Dakota became part of the Missouri Territory.

1818 – The 49th parallel becomes the boundary between the United States and lands claimed by Great Britain in Canada.

All of North Dakota became part of the Missouri Territory.

Fathers Dumoulin and Provencher established a Roman Catholic mission at Pembina; the first school, taught by William Edge, operated in connection with this mission.

1822 – Fur Trading posts were established in the Missouri Valley.

1823 – An expedition led by Stephen J. Long fixed the boundary between the United States and Canada at a point north of Pembina.

A second military expedition, led by Henry Leavenworth, attempted to make treaties with the Arikara and other tribes.

1832 – The Yellowstone, the first steamboat on the upper Missouri reached Fort Union.

1834 – Land east of the Missouri River became part of the Territory of Michigan.

1836 – Land east of the Missouri River became part of the Territory of Wisconsin.

1838 – Land east of the Missouri River became part of the Territory of Iowa.

1839 – John C. Fremont and Jean Nicolet explored the east-central part of the state.

1842 – The first Red River ox-cart caravan traversed trails between St. Joseph (Walhalla) and St. Paul, inaugurating a major commerce that continued for over 25 years. Major fur posts in this area were operated by Joseph Rolette (1842), Norman Kittson (1843), and Antoine Gingras (1843).

Reverend Alonzo Barnard and James Tanner conducted the first Protestant services in the area at Pembina.

1849 –  Land east of the Missouri River became part of the Minnesota Territory.

1849-1851 – The first post office was established in what is now North Dakota at Pembina with Norman Kittson as Postmaster.

1853 – Issac I. Stevens crossed the state surveying the “Northern Route” for the proposed transcontinental railroad.

1854 – Land east of the Missouri River became part of the Nebraska Territory.

1858 – Land east of the Missouri River was left without territorial government when Minnesota became a state.

Military occupation of North Dakota began with the establishment of Fort Abercrombie on the Red River and the present-day town of Abercrombie; the fort was abandoned in 1877.

1859 – The Anson Northrup, the first steamboat on the Red River, traveled from Fort Abercrombie to Winnipeg.