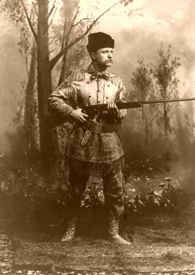 When Theodore Roosevelt came to Dakota Territory to hunt bison in 1883, he was a skinny, young, spectacled man from New York. He could not have imagined how his adventure in this remote and unfamiliar place would forever alter the course of the nation. The rugged landscape and strenuous life that Theodore Roosevelt experienced here would help shape a conservation policy that we still benefit from today.

When young Roosevelt stepped from his train car in the predawn darkness of September 8, 1883, he had only a dim idea of what lay before him in the remote settlement of Medora North Dakota on the Little Missouri River. Roosevelt’s interest in hunting a buffalo, as well as some personal interest in the lifestyle of the West, had led him to this remote outpost. With his pregnant wife, Alice, at home 2,400 miles away, Roosevelt stood alone in the dark as the train lurched away toward Montana.

He knew no one in the small settlement before him and was unsure how the locals might receive him. As he walked toward the Pyramid Park Hotel, he was immersed in a world he had only read about, a place that bristled with distrust of outsiders, especially Easterners. Roosevelt could not have imagined how his adventure in this unfamiliar environment brimming with tough, independent men would forever alter the course of his life.

In 1883, the North Dakota Badlands region was still a place where most of the land was not privately owned, the prairie was fenceless, and the game was plentiful. During the few years he spent here, Roosevelt saw the area change dramatically as ranches, homes, businesses, roads, and towns were developed. 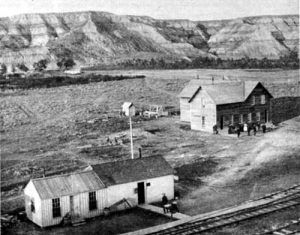 Early settlers were not the first to call the Badlands their home. Echoes of a more distant past still ring in Theodore Roosevelt National Park: a bison processing camp, an arrowhead placed ceremoniously on a cliff ledge, a ring of rocks, the remnants of a lodge. Who were the people who inhabited this forbidding land long before Roosevelt’s time? Why did they come here?

The North Dakota Badlands present many challenges and opportunities, certainly reasons why Theodore Roosevelt connected with the land so deeply. The Badlands, with their ecological diversity and unique geology, provided the means for ancient peoples to gather plant materials, procure clays to make paints, find water, and to hunt animals for subsistence. However, the steep terrain and the slick clay soil made travel exceedingly difficult. The badlands were hardly an inviting place to live, and the archaeological record suggests that long-term occupation was impractical.

Modern interpretations of prehistoric cultures by tribal elders tell us that the difficulties surrounding life in the badlands and the inspiring landforms made the site spiritually significant in many ways. People considered the buttes the homes of many animal spirits and came to the badlands on vision quests and for other rituals in addition to hunting and gathering. 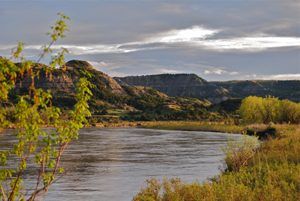 A rich diversity of cultures utilized the badlands region during historic times. The most significant groups were the Mandan and Hidatsa tribes, whose traditional bison hunting grounds included the Little Missouri River basin. West of the badlands, the Hidatsa’s close relatives, the Crow, also utilized the badlands at the eastern edge of their territory. Many other tribes including the Blackfoot, Gros Ventre, Chippewa, Cree, Sioux, and Rocky Boy came to western North Dakota in the early 19th century mainly for hunting and trading, often at the Fort Union Trading Post. These groups did not necessarily seek out the badlands in the way the Mandan, Hidatsa, or Crow might. The Assiniboine occupied a large area of the Northern Great Plains north of the Missouri River. The Arikara entered western and central North Dakota and several bands of the Lakota (Sioux) expanded their range into western North Dakota in the 19th century. Each group has its own history, traditions, spirituality, stories, and uses associated with the badlands. Eagle trapping, bison hunting, and other spiritual purposes were among the traditional uses.

Eagle trapping was important to the Mandan and Hidatsa culture. The process of eagle trapping was intensely spiritual, following certain social, spiritual, and astrological protocols. Even today, many of the specifics of the ritual are known only to those who have the rights to the knowledge within the tribes. Traditionally, only men with rights to perform eagle trapping were allowed to perform the ritual, and then only during specific times of the year as determined by astrology and presumably to coincide with eagle migration. Preparation including fasting and prayer were essential prerequisites to the act of trapping an eagle. 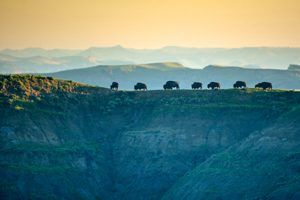 Bison were another critically important resource for traditional societies, and the badlands offered opportunities to hunt them effectively. The steep badlands terrain made it possible to hunt bison without firing a shot. All that was required of the hunters was to cause the bison to stampede over a steep drop-off. A few sites within the park are known to have been used for this purpose, including the remains of a bison processing area. Plains peoples had uses for every part of the bison. The most important parts were the meat for food and the hide for clothing, blankets, and tipi coverings. Other parts of the animal were used for tools, medicine, toys, decoration, rituals, and more.

Springs were the preferred place to collect colored clays used to make paints for a warrior’s face, horse, and home. Paint was considered a powerful medicine. Some springs were used for very specific purposes: for drinking, to collect a certain material, or to perform a specific ritual or ceremony. Evidence from these activities is scarce and largely based on oral tradition kept alive by today’s tribal members.

Today, Theodore Roosevelt National Park remains a significant place for many Native Americans whose association with the land is rooted deeply in the past. A modern visitor experiencing the park might look upon the landscape with the same sense of fascination, wonderment, and reverence that these traditional peoples did, even though their spiritual beliefs and values may vary. 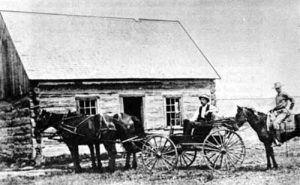 When Theodore Roosevelt arrived in 1883, he solicited the help of Joe Ferris, a 25-year-old Canadian, to serve as a hunting guide and the two set off for the Maltese Cross Ranch. Five miles south of Little Missouri they passed near Howard Eaton’s Custer Trail Ranch which was later to develop into one of the first dude ranches in the United States. After fording the river twice they came to the Maltese Cross ranch house about three miles south of Howard Eaton’s place. Here, Roosevelt met William Merrifield and Sylvane Ferris, Joe’s brother. The next day the three men continued south along the river to Gregor Lang’s place at the mouth of Little Cannonball Creek near the scoria hills 50 miles south of Medora.

Meanwhile, his search for buffalo was beset with many disappointments. Finding a buffalo to shoot proved difficult; most of the bison in the area had been killed mercilessly in recent years by commercial hunters. Unknown to Roosevelt, a herd of 10,000 had been killed nearby just a week before his arrival.

After a week of hunting in almost continuous rains, Roosevelt and Joe Ferris discovered fresh buffalo tracks which they followed through the rough Badlands. Though they finally came upon an old buffalo bull but riding on the rough grounds caused Roosevelt to miss a shot from close range, and the animal got away. After several more disappointing days in the rain and the cold, Roosevelt finally got his buffalo, pouring three shots into the bull bison as it was disappearing over a ridge.