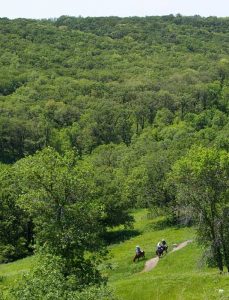 Fort Ransom, North Dakota in 1867 with the purpose of protecting settlers and railroad workers building the Northern Pacific Railroad from Fargo to Bismarck.

On June 17, 1867, the 10th U.S. Infantry, under the leadership of Major George H. Crosman arrived in southeastern North Dakota, in what is present-day Ransom County, to build the fort. Situated on Grizzly Bear Hill, the post was named in honor of Major General Thomas E.G. Ransom, a Civil War hero.

The soldiers first began enclosing an area measuring 350 by 400 feet with breastworks and then began to build several log buildings, including barracks, quartermaster and commissary storehouses, a granary, bakery, guardhouse, hospital, stables, and other buildings. However, according to an 1869 inspection report, most of the buildings were primitive and unfinished. Just three years later, in 1872, the post was dismantled and the materials used to build Fort Seward at Jamestown.

Today, though no buildings remain, the location is a state historic site. The building locations and dry moat are still visible. The site is located 3/4 mile southwest of the town of Fort Ransom, North Dakota.