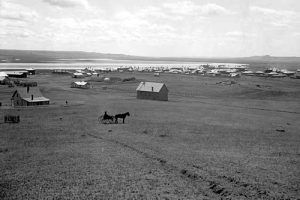 Fort Yates, North Dakota was established in 1863 and was first called the Standing Rock Cantonment. Its purpose was to oversee several bands of the Sioux tribe.

In 1868, the land was given over to the Sioux under the terms of the  Fort Laramie Treaty. However, the military remained and the post’s name was changed by the US Army in 1878 to honor Captain George Yates who was killed by the Lakota Oyate at the Battle of Little Big Horn in 1876. Fort Yates also served as the headquarters of the US Standing Rock Indian Agency, headed by US Indian Service Agent James McLaughlin who ordered the arrest of Sitting Bull on December 14, 1890. He was shot and killed the next day and buried at Fort Yates. The army post and fort were decommissioned in 1903, leaving the Indian Agency and settlement retained the name.

In 1953, Sitting Bull’s remains were moved to Mobridge, South Dakota where he is honored with an appropriate monument. Overlooking the Missouri River near his home, he is remembered among the Lakota not only as an inspirational leader and fearless warrior, but also as a loving father, a spiritual man, and always a person that was friendly to others.

Today, the town of Fort Yates, which supports about 220 people continues to be the headquarters of the Standing Rock Reservation.