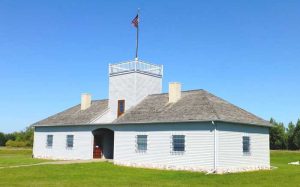 The fort was named for Brigadier General Thomas G. Stevenson who was in the Civil War. The post’s objectives were to serve as a supply base for Fort Totten and protect the vessels traveling along the Missouri River. Though the post was never directly attacked, the troops were sometimes engaged in skirmishes. However, the greater danger to soldiers at the fort were the fierce winters on the northern plains, where temperatures would often drop to 40 degrees below zero.

Fort Stevenson was abandoned in the summer of 1883, the buildings dismantled and the troops transferred to Fort Buford. Today, the site is under the waters of Lake Sakakawea on the Missouri River.