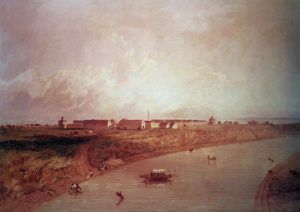 Fort Rice, North Dakota was a military post established in July 1864 by General Alfred H. Sully as a field base for his summer expeditions. At this time, travel in the area was unsafe due to aggressive Indian attacks on transportation routes. The U.S. Government, in an attempt to make both the land and river routes safe for travelers, sent General Sully and the 30th Wisconsin Infantry to build the post.

The fort buildings were constructed of cottonwood logs cut from the banks of the nearby river and prairie sod for the buildings’ roofs. The Wisconsin infantry was later replaced by 1st US Volunteer Infantry, a group of soldiers comprised primarily of Confederate prisoners of war, familiarly known as “Galvanized Yankees,” who had agreed to assist the U.S. Army in the western Frontier instead of languishing in a Union prison.

Life was rough at the fledgling fort, with soldiers suffering from severe cold and disease during the first year. Some 81 men died in the post’s first year; however, only seven of these deaths were due to hostile activity. The post served as the base of operations for General Sully from 1864-65 and later, was the location of several important Indian negotiations, which would eventually lead to the Fort Laramie Treaty. Fort Rice was abandoned in November 1878 when Fort Yates was built on the Standing Rock Agency.

Located in present-day Morton County, 8/10 of a mile southeast of the town of Fort Rice, no buildings mark the Fort Rice State Historic Site. However, in the 1940s the Works Progress Administration (WPA) marked many of Fort Rice’s original foundations, and today there are maps and additional markers at the site.