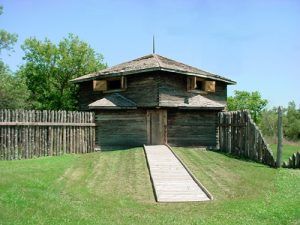 Fort Abercrombie, North Dakota was first established on August 28, 1858, by Lieutenant Colonel John J. Abercrombie on the Red River. However, because the area was prone to flooding, it was reestablished in 1860 on a high west bank of the Red River, north of the original location.

Known as “the Gateway to the Dakotas,” the post was the first permanent U.S. military fort established in what would later become North Dakota. The purpose of the fort was to guard the oxcart trails utilized by fur traders, military supply wagon trains, stagecoach routes, and steamboat traffic on the Red River. The post also served as a supply base for two major gold-seeking expeditions across Dakota into Montana, becoming a hub for the transportation route through the northern plains.

During the Dakota War of 1862, the post was besieged by Sioux warriors for more than six weeks in August and September. At this time, the “regular” U.S. Army soldiers had been withdrawn to fight in the Civil War and the post was manned by the Minnesota Volunteer Infantry. During the siege, several soldiers were killed and wounded.

During these attacks, the fort was not protected by blockhouses or a palisade during the siege; however, they were soon built afterward. These defensive structures consisted of a 675′ x 625′ rectangle that was then enclosed by a stockade of logs projecting above the ground from 8 to 12 feet and blockhouses of hewn logs were constructed at the northeast and southwest corners.

Later, Fort Abercrombie’s mission was changed to protecting the railroad as it was being built; establishing peace between the local Indian tribes; and serving as the hub of military mail routes in the area.

The fort was abandoned in 1877 and most of the fort buildings were sold and removed from the site. The town of Abercrombie, North Dakota was founded a half-mile west in 1884.

In 1939; however, the Works Progress Administration (WPA) reconstructed three blockhouses and the stockade and returned the original military guardhouse to the site. Today, the site features a small museum, one original and two reconstructed blockhouses, the original guardhouse, and the palisade wall. Self-guided tours of the outdoor facilities are open year-round at no charge. The museum is open Thursday through Monday from May 16 through September 15 with a small admission charge.