Located within the rugged canyon lands of southeastern Utah, Robbers Roost was a popular hideout for cattle rustlers and other outlaws during the days of the Wild West. The area was ideal due to its rough terrain — it was easily defendable, provided hundreds of hiding spots, and was difficult to penetrate.

Situated between the Colorado, Green, and Dirty Devil Rivers, this stretch of land, crisscrossed with steep-walled canyons and hidden ravines, had long been utilized by outlaws long before Butch Cassidy and his Wild Bunch came along. The area first received its name and reputation in the 1870s when Cap Brown began to run stolen horses through the region. During his heydays, Brown was said to have been one of the most proficient horse thieves in the American West.

Butch Cassidy and other Hole-in-the-Wall members would come along in the late 1800s, using the area to hide horses and cattle that they had rustled or to rest and lie low following a robbery.

It was here that Cassidy met the man who would become his best friend and partner in crime — Elzy Lay. The two would form the Wild Bunch gang and work diligently to develop contacts that would give them easy access to supplies and fresh horses. Among these contacts was a ranch owned by outlaw sisters Ann and Josie Bassett. Along with the Sundance Kid’s girlfriend, Etta Place; one of Elzy Lay’s girlfriends, Maude Davis; and gang member Laura Bullion, they were the only known females to have entered Robbers Roost during the 30 years it served as an outlaw hideout.

Within the confines of the hideout, the Wild Bunch and other outlaws built cabins and outbuildings to help shield them from the harsh winters and store weapons, horses, chickens, and cattle.

Another frequent resident of Robbers Roost was Matt Warner, born Willard E. Christiansen to the fifth wife of a Mormon bishop in Ephraim, Utah. Warner served a cattle-rustling apprenticeship before joining the McCarty Gang along with Cassidy. The future Wild Bunch used Robbers Roost after a Telluride, Colorado bank robbery in 1889. Members of the Wild Bunch used it again in April 1897 after they held up the Pleasant Valley Coal Company payroll in Castlegate, Utah. Daring robberies such as these made the Wild Bunch notorious to some and folk heroes to others. 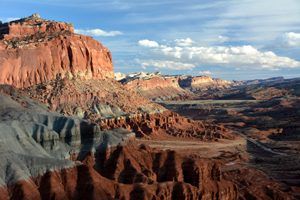 Despite sporadic attempts and many boastful claims, lawmen of the day never discovered the hideout location as the outlaws held each other to strict confidentiality regarding its location. C. L. “Gunplay” Maxwell, a small-time bandit and want-a-be member of the Wild Bunch, wrote Utah Governor Heber M. Wells from prison that Robbers Roost was defended by a well-armed, 200-man gang with an intricate system of fortifications, tunnels, land mines, and a vast storehouse of supplies and ammunition. This letter fueled the reputation of the Roost. Few lawmen cared to enter such supposedly dangerous ground.

Robbers Roost was just one of several hideouts utilized by the Wild Bunch. Others included Brown’s Hole, a rugged canyon region near the junction of Utah, Colorado, and Wyoming on the Green River, and the Hole-in-the-Wall in central Wyoming. The three hideouts were strung out about 200 miles apart. Their hard rides between the string of hideouts were impressive, as they perfected a “Pony Express” method of getaways — using fresh horses and supplies stashed at hideouts some 20 miles apart. The outlaws were all expert horsemen and always stressed the importance of strong, well-trained horses. The route linking these way stations became known as the Outlaw Trail, and it ran from Montana to Mexico.

The Roost was largely abandoned as an outlaw hangout after 1902 when Butch Cassidy and the Sundance Kid departed for South America. However, during Prohibition, the Roost area saw one last surge of illegal activity. Several unlawful whiskey stills were erected at springs in the clandestine canyons. Several of the canyons in the Roost still contain evidence of the illegal stills.

Today, the original Wild Bunch corral remains in Robbers Roost, in addition to a stone chimney, caves, and several carvings. It continues to be a destination for hikers, campers, horseback riders, off-roaders, and canyoners attracted to the myriad of canyons and trails. In 2003, hiker Aaron Ralston rescued himself after being trapped for five days beneath an 800-pound boulder while exploring the canyons alone.