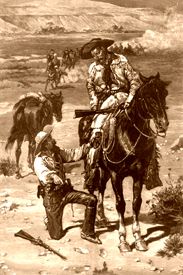 The West owes much to those hardy men who, usually from mere love of adventure, wandered alone or in small companies across the wilderness, ever in advance of the settlements and the troops, exploring the unknown, tracing nameless rivers, uncovering hidden water holes in the grim desert, penetrating to every nook and corner of the Great Plains and the mountains beyond, discovering the haunts of Indians, the routes which the wheels of caravans could follow with the greatest safety, the best camping spots, the scattered places where wood and water were certain to be found. To such as these — the scouts and guides of the frontier — every prairie traveler, every incoming settler, every officer riding at the head of his troop and seeking the savage foe owed gratitude.

The names of many of these men became renowned upon the Plains, and deserve remembrance by this generation. Such were Uncle John Smith, Kit Carson, Jim Bridger, James P. Beckwourth, Uncle Dick Wootton, Jim Baker, Lucian B. Maxwell, Old Bill Williams, Tom Tobin, and James Hobbs, among the old-timers; and W. F. Cody, Bill Hickok, California Joe, Dick Cherry, and Amos Chapman, of a later generation.

A Few Whose Fame will Endure

The scouts of the frontier were numerous, yet in actual service, only a few proved really valuable. Those who rose out of the ruck did so through sheer ability, and have been honored in the reports of the army officers they guided in arduous campaigns of war or exploration. They became famous throughout the length and breadth of the frontier. It was the reports of Fremont that lifted Kit Carson from obscurity; Custer made the fame of California Joe; Merritt and Carr gave widespread to the reputations of Wild Bill and Buffalo Bill. The names of these few Plains celebrities now belong to the history of their country.

There were few plainsmen who did not know one or all of these great pathfinders and deem the knowledge worthy of a boast. Uncle John Smith ranged from the Yellowstone to the Gila River, and from the upper Missouri to the Rio Grandes; not an Indian tribe but had held him guest, scarcely a stream along whose waters he had not trapped. In 1826, when a mere boy, he ran away from home and joined a party of Santa Fe traders, and ever afterward the wilderness held him captive. He married a Cheyenne woman, spoke four Indian dialects, besides French and Spanish, and ruled like an autocrat the Indian trade of the Western Plains. As late as 1869, when he was an old man, he was one of Sheridan’s most trusted guides, competent, tireless, and unerring as a bloodhound on the trail. His life had been one constant adventure, and when in congenial company he would recount for hours the stirring events of his career. His facial resemblance to President Andrew Johnson was remarkable and led to some amusing incidents.

Kit Carson was on the Plains and in the mountains for forty-two years, and his name will always stand forth preeminent among famous frontiersmen. In turn a trader, a hunter, a free trapper, a scout for the army, a guide to explorers and to traveling caravans, and finally a Colonel of Volunteer Cavalry, he had a wider experience than any of his contemporaries.

His was a life of hairbreadth escapes, of endless adventure, marvelous activity and usefulness. For eight years he was the hunter at Bent’s Fort, and all the Plains Indians, as well as the Ute of the mountains, knew him well and feared and respected him. Many a time did he avert war by his influence in the lodges; but when it came, no man ever met it more promptly. As a sign-talker, he had few if any superiors, and as a trailer, he very seldom lost track of those pursued. Inman, who knew him well, thus sums up his characteristics:

“Carson’s nature was made up of some very noble attributes. He was brave but not reckless; a veritable exponent of Christian altruism, and as true to his friends as the needle to the pole. Under the average stature, and rather delicate-looking in his physical proportions, he was, nevertheless, a quick, wiry man, with nerves of steel, and possessing an indomitable will. He was full of caution, but showed a coolness in the moment of supreme danger that was good to witness.”

While he was visiting at Fort Lyon, Colorado, in 1868, an artery in his neck was ruptured, causing his death. Thus passed away the most famous frontiersman of the Great Plains. His burial place was at Taos, New Mexico, where he had long made his home.

Jim Bridger began his experience on the Plains with Ashley’s great trapping expedition. During his years of frontier life, he became the peer of the best among mountaineers and plainsmen. Uneducated by the schools, ignorant of all social conventionalities, he yet possessed a heart overflowing with the milk of human kindness, was generous, honest, and loyal to his friends.

His most important services were rendered as scout and guide during the early surveys for the first transcontinental railroad, and for a number of years, he was in Government employ guiding army detachments in Indian campaigns. No man of his time knew the northern Plains, or the mountains beyond so thoroughly as he, and it was his eyes that first looked out upon the Great Salt Lake in the Winter of 1824-25. Bridger, after a life of wild adventure, transcending fiction, died and was buried at Westport, Missouri.

The resemblance of John Smith to President Andrew Johnson has been mentioned above. Inman relates that once when the President in his ” swing around the circle ” had arrived at St. Louis and was riding through the streets of that city in an open barouche, he was pointed out to  Bridger, who happened to be in the city.

But, the venerable guide and scout, with supreme disgust depicted on his countenance at the idea of anyone attempting to deceive him, only exclaimed: ” Hell! Bill, you can’t fool me! That ‘s Old John Smith.” On another occasion, discovered by a friend sitting on a dry-goods box in one of St. Louis‘ narrow streets, the old frontiersman thus relieved his feelings: “I’ve been settin’ in this infernal canyon ever since mornin’, waitin’ fer some one to come along an’ invite me to take a drink. Hundreds o’ fellers have passed both ways, but none of ’em has opened his head. I never seen sich a onsociable crowd.”

Bridger acted as a guide for Sir George Gore on his famous hunting trip in 1855-57, during which the party killed over forty grizzly bears, twenty-five hundred buffalo, and an unknown quantity of smaller game. Gore had with him fifty helpers, including secretaries, steward, cooks, fly-makers, dog-tenders, and personal servants. His was one of the strangest outfits ever seen on the Plains. During their trip the baronet gave <style=”margin-top: 0; margin-bottom: 0″> Bridger<style=”margin-top: 0; margin-bottom: 0″> a copy of the adventures of Baron Munchausen to read. After painfully deciphering the text the frontiersman confessed that he ‘d be ” dog’oned ef he swallowed everything that thar Baron Munchausen said,” and thought he was a “darned liar”; yet he acknowledged that some of his own adventures would be equally marvelous “if writ down in a book.”

1 thought on “Frontier Scouts and Guides”