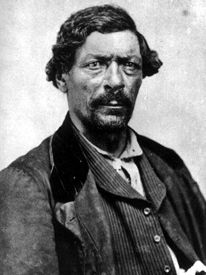 Born as a slave in Fredericksburg County, Virginia, on April 26, 1798, Jim’s mother was a mulatto slave in the service of his white father’s household. The Beckwourth family later moved to St. Louis, Missouri, where James was raised “free” and completed four years of schooling before being apprenticed to a blacksmith for five years.

When he was 18, he ran away but had trouble finding work until he joined General William Henry Ashley’s Rocky Mountain Fur Company. In 1825, he left Ashley’s expedition and went to live among the Crow Indians for the next six years, where they made him a chieftain and called him “Bull’s Robe.” In 1837 he returned to “civilization,” established two trading posts, and helped to found the town of Pueblo, Colorado. He later fought in the Seminole War in 1842 and the California Revolution in 1846.

In 1848 he became General John C. Fremont’s chief scout. In 1850, he discovered a safer route through the Sierra Nevadas called “Beckwourth Pass.” There, he built a ranch and trading post. Beckwourth’s last adventure occurred in 1866 when he fought in the Cheyenne War. During the California Gold Rush years, he improved the Beckwourth Trail, which thousands of settlers followed to central California.

At different times, Jim married at least four women: two Native Americans, a Hispanic, and an African American. He had numerous children by them, although he spent most of his time on the move exploring and trapping beavers and bears.

Over the years, Beckwourth’s travels took him from Florida’s everglades to the Pacific Ocean, blazing the trail in the early exploration and settlement of the American West. He died in October 1860 of mysterious causes while visiting the Crow Indians along the Bighorn River.