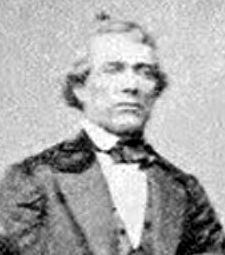 John Simpson Smith, also known as Uncle John Blackfoot Smith, was a trader and frontiersman who ranged from the Yellowstone River to the Gila River, and from the upper Missouri River to the Rio Grande.

Smith was born in Frankfort, Kentucky in 1810 and at the age of 18 joined a party of Santa Fe traders. By 1830, he was trapping in the Rocky Mountains and when he saved himself from Blackfoot Indians by using trickery, he earned the nickname Blackfoot Smith.

Somewhere along the line, he married a Cheyenne woman and in 1843 was at Fort Laramie, Wyoming. Three years later, in 1846, he was at Bent’s Fort, Colorado. Smith, who spoke four Indian dialects, as well as French and Spanish, served as an interpreter for the Fort Laramie Treaty council in 1851. He served briefly as a guide for the army’s Utah Expedition of 1857. He was a pioneer founder of Denver, Colorado and by 1862, was living at Fort Lyon, Colorado.

In 1864, acting as an interpreter, he helped to persuade Black Kettle and his Cheyenne followers to camp at Sand Creek, Colorado. Before the Chivington Massacre occurred there on November 29th, Smith did everything in his power to prevent it and during the massacre, Smith’s son, Jack was killed and John narrowly escaped death, himself. Afterward, he again served as an interpreter at the Little Arkansas council and accompanied the Cheyenne to their new reservation in Indian Territory, where he lived until he died on June 29, 1871.