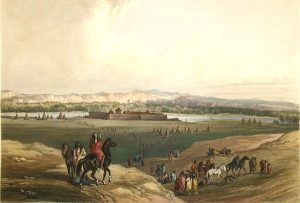 Fort Union on the Missouri River by Karl Bodmer

Trading-Posts Built on the Missouri River

Permanent occupancy of this country of the Great Plains can be dated from the early days of the fur traders. While individual traders and free trappers were probably first in the field and carried their small packs down the rivers to St. Louis, Missouri where they sold them to Eastern dealers, yet close upon their heels came partnerships and organized companies. The latter soon discovered that it was far more profitable to maintain established posts, to which the surrounding Indians might easily travel and exchange their season’s catch of furs for other articles of value. Such posts were built all along the west side of the Missouri River, and for some miles up those tributary streams cleaving the prairies of Kansas, Nebraska, and the Dakotas. Differing somewhat in size, and in importance of equipment, all these earlier fur-trading establishments had much in common.

A few, those which were largest and erected in the midst of hostile tribes, or as centers for the supply of minor posts, were well fortified, surrounded with strong palisades, heavily manned by organized fighting men, and, in one or two instances in the warlike Sioux country, even surmounted by small cannon. But the great majority consisted only of a simple trading-store, with a few necessary buildings in which the employees lived. Isolated for years from all contact with civilization, and without even a visit to the East, surrounded by a savage and oftentimes hostile population, their environment the vast Plains, their business merely barter, the existence of these lonely men became a dull, colorless routine, relieved only by such adventures as arose from daily contact with wildlife. 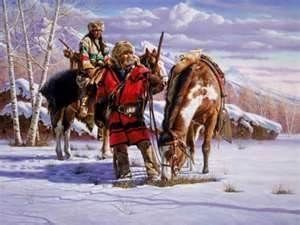 But, this was the beginning of permanent settlement, for each trading-post required employees, the number varying with the importance of the post. There were the trader and his clerk, wood-cutters and hay-makers, who were also boatmen upon occasion, probably a few white trappers under contract, with a worker or two in wood and iron. Sometimes, as at Fort Lisa, Nebraska, opposite Council Bluffs, Iowa and some others of those larger posts up the river, women braved the wilderness to be with the men they loved.

Certain posts became favorite resting-places for free trappers, while others had a large number of paid hunters in their employ. Proper care for such demanded the building of houses, usually of logs, sometimes of earth, or even stone, and the gradual development of the Indian trading-house into a general store, where white as well as red could find their necessities. The requirements of the frontier always included an abundance of ” red liquor,” and the hardy dispenser thereof was not long delayed in coming to the rescue of the thirsty. So, little by little, most of these earlier trading-posts changed into ugly, straggling settlements, their inhabitants at first mere wanderers, the faces changing with each season; as one disappeared into the unknown, another came drifting out of it to fill the vacancy. Roustabouts from the riverboats, tired or dissatisfied voyageurs, hunters from off the Plains, adventurers, vagabonds, the scum of the frontier, came and went, yet always a few lingered on in solid content, until out from the great East began to arrive those first daring settlers of a new country, with wives and children, horses and plows, seeking a permanent home where land was cheap, and where manhood counted for more than dollars. 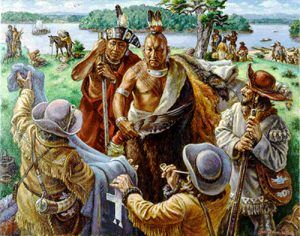 Osage traders by Charles Banks Wilson, courtesy of the artist

This was, in brief, the story of the beginning, the tale of a hundred towns now dotting the western banks of the Missouri River, or looking down in peaceful content upon the waters of the Kansas River, the Platte, the Niobrara, and many streams between — the Indian trader, the wanderer, the settler; the gradual change from lonely post to prosperous village. The later advance westward was fairly rapid for the first one hundred and fifty miles. For that distance the prairies were inviting, the growth of grasses and timber along the bottoms gave abundant promise of other crops, the rainfall seemed sufficient, and the Indian tribes remained peaceful.

Everything in nature urged the settlers onward to possess this goodly land. Yet they came in no crowds, for there was still much vacant country in the East. Only a few, the more adventurous and those loving the wild frontier life, pressed across the wooded hills of Missouri, or the rolling pastures of Iowa, to make settlement on the untried prairies. They were bold hearts who first found passage over the yellow flood, and established their homes in the heart of the wilderness.

Early Settlers in Kansas and Nebraska

These first comers clung close to the stream valleys and the productive bottomlands. Led by prejudices engendered in the experiences of the East, they shunned the open prairie, holding it as of little value. In the timber by the river’s edge, or in the midst of those small groves common to the country, they built their log huts and led lives of privation, hardship, and occasional peril.

Yet constantly was this thin skirmish line advancing still farther into the unknown, and gaining new recruits from the East. Travelers’ published letters, the reports of explorers, private messages to friends, all served to increase steadily the inflowing tide. Soldiers whose terms of service had made them familiar with the country settled there; hunters, charmed with the rare beauty of this prairie land, became permanent residents; and the trader was ever close at hand with his stock of goods. 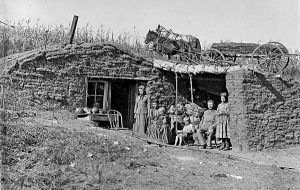 There was, however, very little permanent white settlement in either Nebraska or Kansas until after 1854, at which date these Territories were legally organized. Previous to this, the entire region had been designated merely as the “Indian country,” and its population consisted of little more than wandering trappers and hunters, scattered fur traders with their few employees, and those men interested in the Santa Fe trade. Yet as soon as these Territories were formally thrown open to settlement, the rush across the border began. The local census in 1855 credits Kansas with a population of 8,501, which increased in five years to 107,206. In Nebraska, the growth was less remarkable, its population in 1855 was 4,494, and in 1860, 28,441. In both cases, the settlements were almost totally confined to the river bottoms and within a comparatively short distance of the Missouri River.

Influence of the Santa Fe Trade and the Mormon Migration 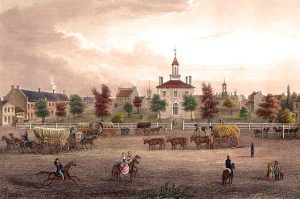 The Santa Fe trade had much influence on the early settlement of Kansas; and the Mormon migration, together with the opening of the Oregon Trail, on that of Nebraska. The more rapid development of the southern Territory can also be traced to the struggle against slavery bringing to Kansas soil ardent sympathizers with the North and the South, respectively, in the fiercely raging controversy. While the main outfitting of the caravans bound for Santa Fe occurred at Independence, Missouri, the necessities of the trade early developed a considerable settlement at Council Grove, Kansas.

This point was nearly one hundred and fifty miles west of the starting place, and, being on the edge of the hostile and perilous Indian country, became utilized for refitting in final preparation for the more serious advance.

Here was a thickly wooded bottom, half a mile to a mile in width, of indefinite length, and affording a great variety of excellent timber. Settlers found their way here at a very early date, some among them being skilled workmen. Round Grove, thirty-five miles from Independence, was also a rendezvous of caravans and resulted in a small settlement. Where these first trails were compelled to cross considerable streams enterprising ferrymen quickly established themselves, and in a few years a store appeared, with the rude beginnings of a village. Topeka, Kansas was thus begun from Papin’s Ferry.

Squatters Along the Trails

The opening of the Oregon Trail left scattered squatters along its way beside the Vermilion, the Blue, and the Platte Rivers, but so far apart as to be scarcely noticeable. These men, except the operators of ferries, lived principally by hunting and became much like their red neighbors in both customs and appearance. Not a few cooperated with the latter in raids upon the passing emigrant trains. The exodus of the Mormons along the Platte Valley likewise left a slight population in favorable locations along their route, but in neither case were those settlers’ propagators of civilization. They were the mere scum of the frontier, living from hand to mouth, little better than the vagrants of the Plains, with whom they associated on terms of a fraternity. In nearly every Indian village were to be met renegade white men.

Degraded Character of the Early Settlements

The establishment of stage lines, and later of the Pony Express, compelled the building of stations at certain distances apart in a line extending from the Missouri River to the mountains. These stations, usually mere shacks, sheltered the station-keeper, the drivers or express riders, a few hostlers, and men employed in various capacities by the company. The result was commonly the growth of a small settlement, generally with its low groggery, and a gambler or two to separate the boys from their hard-earned wages. Some of these stations on the Overland Trail, notably that of Julesburg, Colorado where the Denver division began, grew into considerable importance, attracting a heterogeneous population of frontier characters, and composing a veritable hell.

Drinking, carousing, and promiscuous shooting were the principal occupations both day and night, and very few women of respectability were to be found there. That mere ability as bar-room fighters did not necessarily mean the possession of true courage was more than once proven in the history of Julesburg, Colorado.