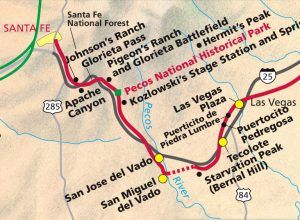 The Upper Pecos River Valley is formed by the Pecos River that originates in the Sangre de Cristo mountain range in Mora County, New Mexico north of Pecos. The valley is a series of broad flat mesas and grassy meadows on the east and steep canyons and mountains on the west. This region has been utilized for centuries by Pueblo and Plains Indians, Spanish settlers and traders, Santa Fe Trail traders, the U. S. military, and early travelers of Route 66.

Through this area, the trail begins at the intersection of U.S. Highway 84 and I-25 at Romeroville and follows the path of the old Santa Fe Trail and the pre-1937 alignment of Route 66, passing through a number of old Hispano communities, past the Pecos Pueblo and to Pecos, New Mexico, some 38 miles distant. 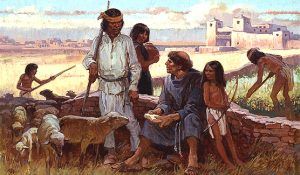 The valley was first occupied at least 12,000 years ago when it was used by nomadic hunters and gatherers. In about 750 A.D. the first permanent settlements began in the valley and by 1450, farmers were dispersed throughout the area. The Pecos Pueblo became the principal trading center at that time. The area was visited by  Francisco Vázquez de Coronado in 1540 and Don Juan de Onate in 1698.

Hispanic settlers did not permanently reside in the area until the end of the 18th and early 19th centuries when a number of land grants were made in the area. The largest of these, the San Miguel del Vado Grant of 1794, was the precursor for most of the settlements established on the Pecos River and its tributaries downstream from the Pecos Pueblo. Most of these early settlements were planned around defensible plazas to serve as a buffer against the hostile incursions of the Comanche and Kiowa Indians.

In 1821, William Becknell’s wagon train blazed the Santa Fe Trail through the area. Soon, more anglo travelers would come to the region resulting in relative prosperity for the villages along the Pecos River.

By 1831, an extensive system of irrigation ditches had been constructed along the Pecos River and its tributaries to serve the area communities.

In 1846, during the Mexican-American War, General Stephen Kearny’s forces followed the Santa Fe Trail below Bent’s Fort, in Colorado to establish a U.S. provisional government in New Mexico. Prior to reaching Santa Fe, and gave speeches from roof-tops in Las Vegas, Tecolote, and San Miguel, absolving the people from their allegiance to governor Manuel Armijo and Mexico. In return, he promised protection of life, property and religion to all who would peaceably submit to the United States government, and death for those who would resist.

By the end of the Mexican-American War in 1848, more Anglo-Americans came to the region, bringing their political, economic, and cultural influences to the Pecos River Valley and threatening the traditional communities and lifeways.

In 1879, the Santa Fe, Atchison, and Topeka Railroad began to be built through the Upper Pecos River Valley which brought more change to the region.

Route 66 came through the area in 1926, no doubt, boosting the economy of the villages along the way. This segment of Route 66, called the Santa Fe Loop, moved northwest from Santa Rosa, through Dilia to Romeroville, before turning west through the Pecos River Valley to Santa Fe, and back south to Albuquerque. In 1937, Santa Fe was bypassed and Route 66 was realigned on a direct route from Santa Rosa to Albuquerque.