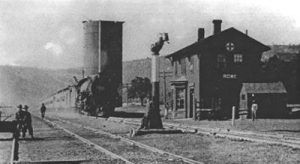 The train station in Rowe, New Mexico was built in 1881.

Located just four miles south of the Pecos National Historic Park at the junction of I-25 and New Mexico Highway 63, is the unincorporated community of Rowe, New Mexico. It was established 1876 as a railroad camp for the Atchison, Topeka & Santa Fe Railroad.

This area was once part of the Los Trigos Land Grant which was located between the Pecos Pueblo Indian Grant on the north and The San Miguel del Vado Land Grant on the South. About two miles east of present-day Rowe, once stood the village of Las Ruedas on the Pecos River. This village was originally settled in the early 19th century.

When the Atchison, Topeka and Santa Fe Railroad was coming through the area they bought most of the grant and extensively logged the land for railroad ties. A few miles up the arroyo from the village of Las Ruedas, the railroad camp was established at the base of the mesa. The camp drew labor away from nearby settlements, the majority of which came from Las Ruedas. A pipeline to provide water for steam engines was laid between Rowe and Las Ruedas. 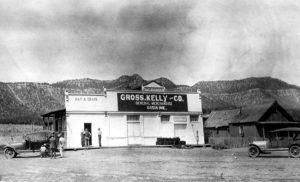 The Santa Fe Trail was in its final days with the coming of the railroad. However, stagecoaches were still running along the trail and a stagecoach station was established at the first store in Rowe, which was owned by Andrew Kosloskie. He chose the location because it was near a good spring.

The railroad was completed through here in 1880 and the station was first called Kingman, but was later named Rowe for a contractor of the railroad. A train depot was built in 1881. It closed in 1961 and burned down in 1973. Passing within a mile of the Pecos Pueblo, the transcontinental line followed the Santa Fe Trail over the divide, moving thousands of cattle and hauling out tons of ore-bearing precious metals over the next decades. The railroad also brought scores of American settlers, which would change the culture of the region.

In the meantime, the new town of Rowe had caused the village of Las Ruedas to be abandoned. Today, there is nothing left of the old town, which once included a church. The site is on private property and inaccessible. 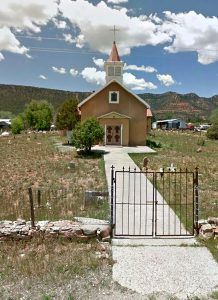 In the early days of Rowe, as well as many other areas of New Mexico, Gross, Kelly & Company, a pioneer wholesale and retail mercantile company, was an important factor. Among the firm’s landholdings was the old Pecos Grant, which included the site of the ruined Pecos pueblo and mission church. In Rowe, the company manufactured railroad ties, mine props, and firewood made by the locals. A store was operated by the company in Rowe between 1910 and 1947. Afterward, the building continued to operate as a store under different ownership until the 1960s.

In 1926 Route 66 came through Rowe and the same year, rodeo producer Tex Austin established a dude and cattle ranch, called the Forked Lightning Ranch on the old Los Trigos Land Grant. Later portions of the ranch were sold to Buddy Fogelson who married actress, Greer Garson. Portions were later owned by Jane Fonda and Val Kilmer. Currently, there is no public access to the grant except for the northern portion currently owned and managed by the Pecos National Historical Park.

In 1937, Route 66 was realigned on a more direct route from Santa Rosa to Albuquerque, bypassing Santa Fe and the villages of the Pecos River Valley.

Rowe is a sleepy little village today, but still maintains the Holy Family Catholic Church on Segrada Familia Lane and a post office.

Rowe is at the junction of I-25 and New Mexico Highway 63, six miles south of Pecos. Between these two villages can be seen portions of the Forked Lightning Ranch, the Santa Fe Trail era Kozloski Trading Post, and the Pecos Pueblo. 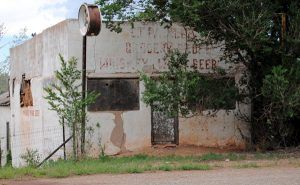 An old bar in Rowe, New Mexico by Kathy Weiser-Alexander