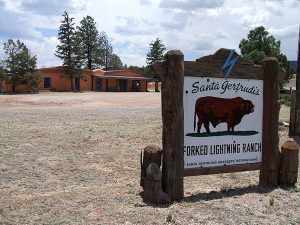 For hundreds of years, the land along the Pecos River in northeast New Mexico has nourished and served the needs of the inhabitants and settlers of the region. The Forked Lightning Ranch is an important part of that story.

In 1925, John “Tex” Austin, an American rodeo promoter and entrepreneur, known as the “King of the Rodeo”, purchased a number of parcels of land, equalling 5,500-acres that were once part of the Los Trigos and Pecos Pueblo land grants. He then established the Forked Lightning Ranch, which included Kozlowski’s Trading Post, a popular stopping point along the Santa Fe Trail.

He used the old trading post as the ranch headquarters while he built a new ranch house on the bluff overlooking the confluence of the Pecos River and Glorieta Creek. His ranch house was designed by John Gaw Meem, who later became a renowned Southwestern architect. The house was designed in the Pueblo Revival Style, with rooms surrounding a central patio. 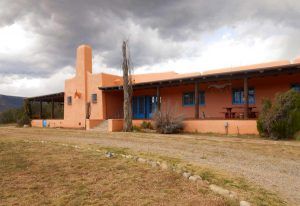 In the meantime, he began to operate the Forked Lightning Ranch as an upscale dude ranch and resort, advertising the ranch house as “modern in every detail,” with “every room open on both sides.” The ranch house had electric lights, modern heating and plumbing, and between each two bedrooms was a bathroom with running hot and cold water. In addition, the ranch offered its guests “food, lodging, saddle horses, guides, instructor, use of polo practice field, horseback picnic trips, motor trips to Santa Fe, the Indian pueblos, or any and all points of interest within 50 or 75 miles of the ranch.” Riding outfits, hats, boots, and equipment could be purchased at the Trading Post and Ranch Store.

Austin recruited “dudes” from back east to experience a bit of the “Old West.” They traveled at their own expense, two days by train from Chicago for this opportunity. Once they arrived, Austin held cattle drives between the ranch and Las Vegas, New Mexico. But not just anybody could enjoy Forked Lightning Ranch. The Ranch’s guest list included such luminaries of the time as Colonel and Mrs. Charles Lindbergh and Will Rogers, and brochures cautioned that “the accommodations . . . are for the recreation of healthy people and no health seekers will be received.” Another brochure announced that “there are accommodations for only a very limited number of guests and no one will be received without references.” 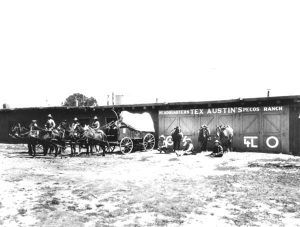 Austin operated the property as a resort for seven years, until the Great Depression hit, and Austin declared bankruptcy and lost the property to the bank in 1932. Afterward, Austin moved to Santa Fe, where he operated a restaurant with his wife for several years until his death. In the meantime, his ranch was sold and remained in private hands for several years, with the owners residing in the old Kozlowski Trading Post while Austin’s ranch house stood empty.

In 1941, Austin’s 5,500-acre Forked Lightning Ranch was purchased by Colonel Elijah Edwin “Buddy” Fogelson, a Texas oilman and rancher. Over time, Fogelson expanded the original ranch to about 18,000 acres. He used Austin’s ranch house as his residence and the Kozlowski Trading Post as quarters for the ranch foreman. The land then operated as a working ranch. In 1949 Fogelson married Hollywood actress Greer Garson and the couple used the property as their part-time residence for the rest of their lives.

In addition to serving as a working cattle ranch, Forked Lightning was a social center for entertaining the rich and famous. Lavish parties included chuckwagon picnic lunches on the banks of the Pecos River or evening fiesta buffets on the patio, hunt breakfasts, and afternoon teas. The Fogelsons constructed a skeet shooting range above the ranch house in the 1950s. Hollywood celebrities, politicians, artists, and philanthropists visited the ranch, including Art Linkletter, Merle Oberon, Vincent Minnelli, David O. Selznick, Winthrop Rockefeller, and Georgia O’Keeffe. 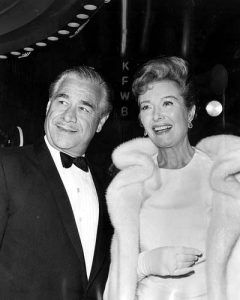 After Buddy was diagnosed with Parkinson’s disease in 1982, the Fogelsons considered donating the entire ranch to the National Park Service when their involvement with the cattle operation declined during Buddy‟s illness. Buddy died in 1987 and left the 5,500-acre northern parcel, which contained the ranch house, to his wife Greer and left the southern, 8,000-acre Los Trigos Ranch to his nephew and adopted son, Gayle David Ferguson. In 1989 controversy erupted when Greer and Gayle began to negotiate the sale of their combined acreage to a Florida-based developer who planned to develop a full-service resort community that would have rapidly urbanized the area.

Following protests from the local community and the press, Mrs. Fogelson “reconsidered” the transaction and decided instead to sell her share of the property to The Conservation Fund, in 1991. The Conservation Fund then donated the land to become part of Pecos National Historical Park, which established new boundaries to include the original 365-acre national monument and the addition of the 5,500-acre ranch.

In the meantime, Gayle Fogelson sold his portion of the ranch near Rowe, New Mexico in two parcels to local residents. In 2000, actress Jane Fonda obtained 2,300 acres of the land and established her own Fork Lightning Ranch. It was listed for sale for $19,500,000 in 2015 and was sold to a local buyer. Another large portion was purchased by actor Val Kilmer who named his 5,328-acres the Pecos River Ranch. He sold most of his holdings in 2011 for $18.5 million to a Texas Oil executive. These portions of the old Forked Lightning Ranch are inaccessible to the public.

The Forked Lightning Ranch of the Pecos National Park is located about 26 miles southeast of Santa Fe, New Mexico. A Forked Lightning Ranch House Tour is available a couple of times a week, which is the only opportunity to explore the ranch house itself. The house sits behind a locked gate down a 1.5-mile dirt road next to Kozlowski’s Trading Post.

Continue your tour along the Santa Fe Trail and Route 66 to the Pecos Pueblo National Park.located just about 1/2 mile to the north on New Mexico Highway 63. 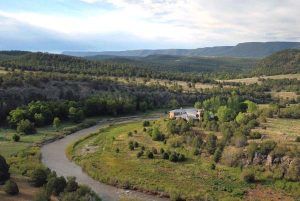